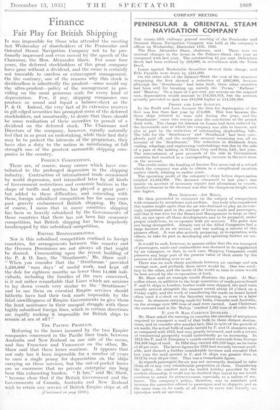 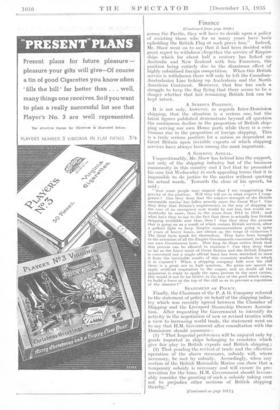 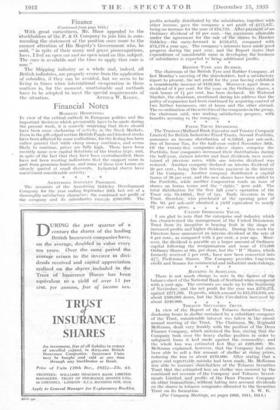 IF was impossible for those who attended the meeting last Wednesday of shareholders of the Peninsular and Oriental Steam Navigation Company not to be pro- foundly impressed and even moved by the speech of the Chairman,. the Hon. Alexander Shaw. For some four years, the deferred stockholders of this great company have gone without a dividend, and the cause is certainly not traceable to careless or extravagant managenient. On the contrary, one of the reasons why this stock is dividendless is admittedly the prudent—some would say the' ultra-prudent—Lpelicy of the management in pro- Viding on the 'most generous scale for every kind of depreciation. Few, if any, shipping companies can produce so sound' and liquid a balance-sheet as the P. & 0. Indeed, the very fact of its extensive resen:es in gilt-edged securities haS prompted some of the deferred stockholders, not unnaturally, to desire that there should be some realisation of these securities to permit of a dividend on the deferred stock. The Chairman and Directors of the company; however, equally naturally feel that in so great an undertaking, while their first duty may be to protect the interests of the proprietors, they have also a duty to the nation in maintaining at full strength one of the greatest mercantile shipping com- panies in the country.

There are, of course, many causes which have con- tributed to the prolonged depression in the shipping industry. Contraction of international trade occasioned by world depression, and intensified' later by all kinds of Government restrictions and economic barriers in the shape of tariffs and quotas, 'has' played a great part ; but added to these difficulties, and coinciding with them, foreign subsidised competition has for some years past gravely embarrassed British shipping. By this, of course,- I mean that in many countries shipping has' been so heavily subsidised by the Governments of those countries that there has not been fair economic competition, but British shipping has been hopelessly handicapped by this subsidised competition.

Nor is this subsidised competition 'confined to foreign countries, for arrangements between this country and the Oversea Dominions are not always all that might be desired. Commenting upon the recent building of the p. & 0. liner, the ` Strathmore,' Mr. Shaw said : " When you consider that the, ` Strathmore ' provided 1,1350,000 ` man days ' of useful work,' and kept off the dole for eighteen months no fewer than 14,000 indi- vlduals, including the families of the men concerned, : is it not rather 'remarkable that Lines which are anxious .to lay down vessels very similar to the ` Strathmore' and to use them on essential Empire services should hitherto have had their task made impossible by the fatal unwillingness of Empire Governments to give them, the least, assistance in their 'unequal struggle with these' highly subsidised foreign lines, which in certain directions are rapidly making.. it impossible for British ships to remain at sea at all , • • - T u 'PACIFIC PROBLEM. . • Referring to the loSses incurred by the two Empire companies concerned in the Pacific liner trade between Australia and New Zealand on one side , of the ocean, and San Francisco and Vancouver on the other, Mr. Shaw said that these losses continue. It appears that not only has it been impossible for a number of years to earn a single penny for depreciation on the ships carrying on these services, but the :out-of-pocket losses are so enormous that no- private enterprise can long bear this exhausting burden. " It has'," said Mr: Shaw, " become clear that if the 'British Government and the Governments of Canada, Australia and New Zealand wish to retain any service of British Empire ships at all • (Coni inered on paig 1010,)

across the Pacific, they will have to decide upon a policy M of assisting those who for so many years haVe been upholding the British Flag at such grave loss." Indeed, Mr. Shaw went on to say that it had been decided with great regret to withdraw altogether the service of Empire, ships which for about half a century has linked up . Australia and New Zealand with San Francisco, the . position being entirely due to the disastrous effect of highly subsidised foreign competition. When this British service is withdrawn there will only be left the Canadian- Australasian Line linking up Australasia and the North American Continent. Moreover, that line has such a, struggle to keep the flag flying that there seems to be a danger whether that last remaining British link can be kept intact.

It is not only, however, as regards Inter-Dominion shipping, that the situation is a serious one, but the latest figures published demonstrate beyond all question the continuous decline in the proportion of British ship- ping serving our own Home ports while there is a con- tinuous rise in the proportion of foreign shipping. . This is a truly serious position for a nation so dependent as Great Britain upon, invisible exports of which shipping. services have always been among the most important.

Unquestionably, Mr. Shaw has behind him the support, not only of the shipping industry but of the business community in this country and I feel that he presented his ease last Wednesday in such appealing terms that it is, impossible to do justice to the matter without .quoting his actual words. Towards the close of his speech, he said : • " Now some people may suggest that I am exaggerating the gravity of the position. Will they toll me in what respect 1 exag- gerate 1 Can they deny that the relative strength of the British mercantile marine has fallen gravely, since the Groat War 1 Can they deny that Britain's requirements in. the way of shipping in the case of an emergency now would be not loss, but would un- doubtedly be more, than in the years from 1914 to 1918; and what have they to say to the fact that there is actually less British shipping available now than then ? Can they deny the process that is going on as a result of which certain British services, after, n gallant fight to keep Empire communications going in spite of years of heavy losses, are almost on the verge of extinction ? The fatal facts speak for themselves. They have been brought to the attention of all the Empire Governments concerned, including our own Government hero. How long do these critics think that this process can be allowed to continue ? Can they deny that so far as the Liner trade of Great Britain and the British Empire is concerned not a single official hand has been stretched to save it from the inevitable results of this economic warfare to which it is exposed ? When a shipping company falls over the cliff there is a great stir in high quarters. No pains are spared to • apply artificial respiration to the corpse, and no doubt all the apparatus is ready to .apply the same process to the next victim. : But would it not be far better, in the face of the peril which exists,. to build a fence at the top of the cliff so as to prevent a repetition of the disaster 7" •

Finally, the Chairman of the P. & 0. Company referred to the statement of policy on behalf of the shipping indus, try, which, was recently agreed between the Chamber of . Shipping and the Liverpool Steamship Owners Associw- tion. After requesting the Government to intensify its activity in the negotiation of new or revised treaties with it view to increasing world trade, the. statement went on to say that H.M. Government after consultation with the Dominions should announce : (1) " That Imperial preferences will be enjoyed only by , goods imported in ships belonging to countries which give fair play to British exports and British shipping ; (2) That pending the revival of trade and the effective Operation of the above measures, subsidy Will, where necessary, be met by subsidy. Accordingly, when any Section Of the British Mercantile Marine can 016;w:that a temporary subsidy is necessary and will ensure its, pre!. servation 'for tile time, H.M. Government should favour- ably consider the granting of 'such a' subsidy taking care not to prejudice other sections of British shipping thereby."

Finance (Continued from page 1010.) With .great earnestness, Mr. Shaw appealed to the stockholders of the P. & 0. Company to join him in com- mending the statement of the position once more to the earnest attention of His Majesty's Government who, he said, " in spite of their many and grave preoccupations, have, I feel an open ear and an open mind on this subject. The cure is available and the time to apply that cure is now."

The Shipping industry as a whole and, indeed, all British industries, are properly averse from the application of subsidies, if they can be avoided, but we seem. to. be living in times when international co-operation in these matters is, for the moment, unattainable and methods have to be adopted to meet the special requirements of