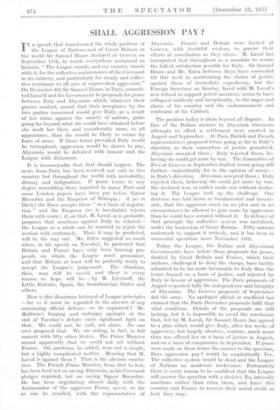 TN a speech that transformed the whole position of 1 the League of Nations and of • Great Britain in the world Sir Samuel Hoare declared at Geneva on September 11th, in words everywhere • acclaimed • as historic, " The League stands, and my country stands with it, for the collective maintenance of the Covenant in its entirety, and particularly for steady and collec- tive resistance to all acts of unprovoked aggression." On December 8th Sir Samuel Iloare, in Paris, commit- ted himself and his.Government to proposals for peace between Italy and Abyssinia which, whatever their precise content, meant that their acceptance by the two parties concerned would give Italy, as a result of her crime against the society of nations, gains going far beyond' what she could have obtained before she dealt her blow, and considerably more, to all appearance, than she would be likely to secure by force of arms. If those terms prevailed Italy would be triumphant, aggression would be shown to pay, Abyssinia. would be defeated with honour and the

League with dishonour. • • It is inconceivable that that should happen: The news from Paris has been received not only in this country but throughout the world with incredulity, dismay and indignation. If peace terms in any degree resembling those reported in many Paris and some London papers have been put before Signor Mussolini and the Emperor of Ethiopia ; if (as is likely) the Duce accepts them " as a basis of negotia- tion " and the Emperor (as is inevitable) rejects them with scorn ; if, on that, M. Laval, as is probable, proposes that sanctions against Italy be relaxed— the League as a whole can be counted to reject the motion with contumely. That, it may be predicted, will be the way out. Mr. Eden suggested as much when, in his speech on Tuesday, he protested that Britain and France have only been framing pro- posals on which the League must pronounce, and that Britain at least will be perfectly ready to accept the League's judgement. The situation,. then, may still be saved, and there is every reason to hope will be— by M. Litvinoff, the Little Entente, Spain, the Scandinavian States and others. • . ,

How is this disastrous betrayal of League principles, —for so it must be regarded in the absence of any convincing official defence—to be explained ? Mr. Baldwin's limping and unhappy. apologia at the. end of Tuesday's debate casts significant light on that. We could not, he said, act alone. No one ever proposed that. We are acting, in fact, in full concert with fifty other States. The Prime Minister, meant apparently that we could not act without France. Oil sanctions, he added, were not a simple,. but a highly complicated matter. Meaning that M. Laval is against them ? That is the obvious conclu- sion. The French Prithe Minister, from first to last, has been bent not on saving Abyssinia, as his Covenant pledges required, but on saving Signor Mussolini. He has been negotiating almost daily with the Ambassador of the aggressor Power, never, so far as can be recalled, with the representative of Abyssinia. France and Britain were invited • at Geneva, with doubtful wisdom, to • pursue their efforts at conciliation as they chose. M. Laval has interpreted that throughout as a mandate to secure the .fullest satisfaction possible for Italy, Sir Samuel Hoare and Mr. Eden between them have succeeded till this week in maintaining the • claims of justice against those of immediate expediency; but the Foreign Secretary on Sunday; faced with M. Laval's new refusal to support petrol sanctions, seems to have collapsed suddenly and inexplicably, to the anger and alarm of his country and the embarrassment and confusion of his Cabinet.

The position today is plain beyond all disguise. In face of the Italian menace to Abyssinia strenuous attempts to effect a settlement were exerted in August' and September. At Paris British. and French representatives proposed terms going as far in Italy's direction as their conception of justice permitted. Abyssinia accepted them ; Italy rejected, them, be- lieving she could get more by war. The Committee of Five at Geneva in September drafted terms going still further—unjustifiably far in the opinion of many— in Italy's direction. Abyssinia accepted them ; Italy rejected them, believing she could get more by war. She declared war, or rather made war without declar-, ing it. The League took up the challenge. One doctrine was laid down as fundamental and immut- able; that the, aggressor must on no plea and in no circumstances be allowed to gain more by aggression than he could have secured without it. .In defence of , that principle the collective system was mobilised, under the leadership of Great Britain. Fifty nations undertook to support it actively, and it has been in successful operation since November 18th.

Today the League, the Italian and Abyssinian Governments have before them proposals for peace, drafted by Great Britain and France, which their authors, challenged to deny. the charge; have tacitly admitted. to be far more favourable to Italy than the terms framed on a basis of justice; and rejected by Italy in favour of aggression. The Paris proposals of August respected fully the independence and integrity. of Abyssinia. • The. Geneva,, proposals of September did the same. No. apologist official or 'unofficial. hag claimed that the Paris December proposals fulfil that vital condition. Details of the *proposals are still lacking, but it is • impossible to avoid the ,conclusion ' that, led by M. Laval, Sir Samuel Iloare has agreed to a plan which would give Italy, after ten weeks of aggressive, but largely abortive, warfare, much more than was offered her on a basis of justice in August, and on a basis of compromise in September: If peace were made on these terms the answer to the question, Does aggression pay ? would be emphatically Yes. The collective system would be dead and the League of Nations an academic irrelevance. Fortunately there is every reason to be confident that the League Will answer the question with a decisive No, intensify' sanctions rather than relax them, and leave this country and France to recover their moral credit as best they may.