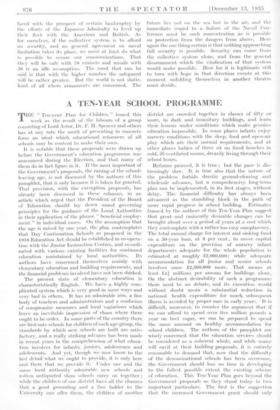 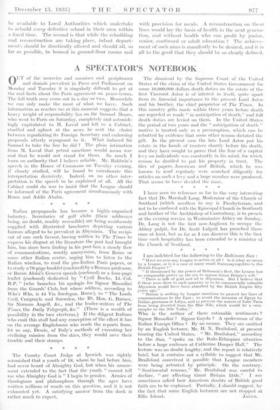 THE " Ten-year Plan for Children " issued this week as the result of the labours of a group consisting of Lord Astor, Dr.. F. H. Spencer and others has at any rate the merit of presenting in concrete form an ideal which educational reformers of all schools may be content to make their own.

It is notable that these proposals were drawn up before the Government's education programme was announced during the Election, and that many of them do in fact figure in it. If the most important of the Government's proposals, the raising of the school-' leaving age, is not discussed by the authors of this pamphlet, that is only because it is taken for granted. That provision, with the exemption proposals, has already been discussed in these columns, in an article which urged that . the ,President of the Board of Education . should .lay down sound governing principles for the guidance of the Local Authorities in their application of the phrase " beneficial employ- ment " in individual cases. On the assumption that the age is raised by one year, the plan contemplates that Day Continuation Schools as proposed in the 1918 Education Act should be established in co-opera- tion with the Junior Instruction Centres, and co-ordi- nated with various existing facilities for continued education maintained by local . authorities. Its authors have concerned . themselves mainly. with elementary education and building requirements, and • the financial problems involved have not been shirked.

The present state of elementary • education is characteristically English. We have a highly C0111- plicate& system which is very good in some ways and very bad in others. . It has an admirable aim, a fine body of teachers and administrators and a confusion of compromise measures and local Variations which leave an inevitable impression of chaos where there ought to be order. In sortie parts of the country there are first-rate schools for children of each age-group, the standards by which new, schools are built. are satis- factory, and a really striking advance has been .made in recent years in the comprehension of what educa- tion involves for infants, juniors, adolescence and adolescents. And yet, though we now know to the last detail what we ought to provide, it is only here and there that we provide it. Under one and the. same local authority admirable • new schools and rottrn antiquated sluM schools carry on together ; while the children of one district have all the chances that a good grounding ..and a free ladder to the University can offer them, the children of another district are crowded together in classes of fifty or more, in dark and insanitary buildings, and learn- their lessons under conditions which make genuine education impossible. In some places infants enjoy nursery conditions with the sleep, food and open-air play which arc their normal requirements, and at other places babies of three sit on fixed benches in cold, ill-ventilated rooms, drearily living through their school hours.

Reforms proceed, it is trite : but the 'pace is dis- tressingly slow. It is true also that the nature of the problem forbids drastic ground-clearing and wholesale advance, but a comprehensive long-term plan can be implemented, in its first stages, without delay. The financial difficulty has always been advanced as the stumbling block in the path of more rapid progress in school building. Estimates framed by the authors of this Ten-Year Plan suggest that great and eminently desirable changes can be brought about over a period of years at a cost which they contemplate with a rather too easy complacency. The total annual charge for interest and sinking fund on a 50-year loan, at 3 per cent., to cover capital expenditure on the provision of nursery infant departinents adequate for the whole population is estimated at roughly £2,000,000; while adequate accommodation for all junior and senior schools involves • some £2,500,000 more. That means at least E4-i millions per annum for bitildings alone, On the abstract desirability of such a programme there need be no debate, and its -execution, would without .doubt mein • a substantial reduction in national health expenditure for much subsequent illness is avoided by proper care in early years • It is difficult, 'moreover, to counter the argument' that if we can afford to spend over five million pounds a year on beet sugar, we can be prepared to spend the same amount on healthy accommodation for school children. The authors of the pamphlet are wisely concerned that the education services should be considered as a coherent whole, and while many will cavil at their building proposals, it is entirely reasonable to demand that, now that the difficulty of 'the denominational schools has been overcome, the .GoNtinment should lose no time in developing to the fullest possible extent the existing scheme of education. This Ten-Year Plan goes beyond the Government proposals as they stand today in two important particulars. The first is the suggestion that the -increased Government grant should only he available to Local Authorities which undertake to rebuild every defective school in their area .within a fixed time. The second is that while the rebuilding and reconstruction arc taking place, infant depart- ments should be drastically altered and should all, so W. as possible, be housed in ground-floor rooms and with provision for meals, A reconstruction on these lines would lay the basis of. health in the next genera- tion, and without health who can profit by junior, senior, continued or adult education ? The achieve- ment of such aims is manifestly to be desired, and it is all to the good that they should be so clearly defined.