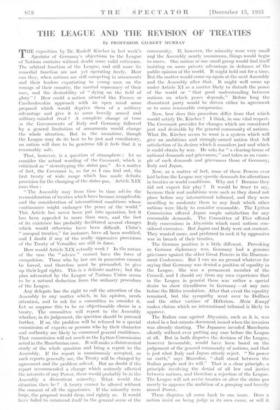 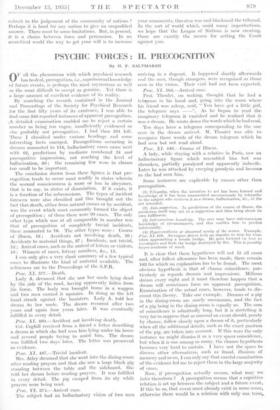 THE LEAGUE AND THE REVISION OF TREATIES

THE exposition by Dr. Rudolf Kircher in last week's Spectator of Germany's objections to the League of Nations contains without doubt some valid criticisms. The arbitral function of the League, and still more its remedial function are not yet operating freely. How can they, when nations are still competing in armaments and their leaders expatiating to young men on the wrongs of their country, the martial supremacy of their race, and the desirability : of " dying on the field of glory" ? How could a nation. situated like France or Czechoslovakia approach • with an open mind some proposal which would deprive them of a military advantage and give it to some heavily armed and military-minded rival ? A complete change of tone n the Governments of Italy and Germany followed by a • general - limitation of armaments would change the • whole situation. But in the meantime, though the League may do its best to be just and conciliatory, no nation will dare to be generous till it feels that it is reasonably safe.

That, hoWever, is a question of atmosphere ; letus consider the actual wording of the Covenant, which is criticised as " stereotyping, the status quo." As a matter of fact, the Covenant is, • as far as I can find out, the first treaty of wide range which has • made definite provision for the changing of the status quo.. Article XIX runs thus : " The Assembly may from time to time advise the reconsideration of treaties which have become inappliCable and the consideration of international conditions whose continuance might endanger the peace of the world." This Article has never been put into operation, but it has been appealed to more than once, and the fact of its existence has probably facilitated several changes which would otherwise have been difficult. China's unequal treaties," for instance, have all been modified, and I doUbt if any of the really oppreSsive provisions of the Treaty of Versailles are still in force. • How would Article XIX actually work ? In the nature of the ease the " advice " cannot • have the force of compulsion. Those who by law are in possession cannot be forced, and therefore must be persuaded, to give up their legal -rights. This is a delicate matter; but the plan advocated by the League of Nations Union seems to be a natural deduction from the ordinary procedure of the League. Any delegate has the right to call the attention of the Assembly to any matter which, in his opinion, needs attention, and to ask for a committee to consider it, Let us suppose this to be an objectionable clause in a treaty. The committee will report to the Assembly whether,. in its judgement, the question should be pursued further. If so, the problem will be referred to a special commission of experts or persons who by their character and authority are likely to command general confidence. That commission will act much as the Lytton Commission acted in the Manchurian case. . It will make a disinterested study of the whole question and bring a report to the Assembly. If the report is unanimously accepted, as such reports generally are, the Treaty will be changed by agreement and the problem solved. But no doubt if the report recommended a change which seriously affected the interests of any Power, there would probably be in the Assembly a dissentient minority. What would the situation then be ? A treaty cannot be altered without the consent of all the signatories. If the minority were large, the proposal would drop, and rightly so. It would have failed to commend itself to the general sense of the community. If, however, the minority were very small aTIO the. Assembly nearly unanimous, things would begin to move. One nation or one small group would find itself insisting on some private advantage in defiance of the public opinion of the world. It might hold out for a time. But the matter would come•up again at theneXt Assembly and the Assembly after that.. It might well come up under Article XI as a matter likely to disturb the peace of the world or " that good understanding between nations on which peace depends." Before long the dissentient party would be driven either to agreement or to some reasonable compromise.

Now, how does this procedure differ from that which would satisfy Dr. Kircher ? I think, in one vital respect. The Covenant provides for changes which are considered just and desirable by the general community of nations. What Dr. Kircher seems to want is a system which will give an ambitious and strongly-armed nation that full satisfaction of its desires which it considers just and which it could obtain by war. 'He asks for " a clearing-houSe of national demands and grievances," and takes as an exam- ple of such demands and grievances those of Germany, Italy and Japan.

Now, as a matter of fact, none of these Powers ever laid before the League any specific demands for alterations in treaties or world conditions. Why not ? Because they did not expect fair play? It would be truer to say, beeause their real ambitions were such as they dared not plaCe before any international tribunal, and they were unwilling to moderate them to any limit which other nations were likely to consider reasonable. The Lytton Commission offered Japan ample satisfaction for any reasonable demands.. The Committee of Five offered Italy concessions in Abyssinia which most 'nations con- sidered excessive. But Japan and Italy were not content. They wanted more, and preferred to seek it by aggressive war in breach of their treaties.

The German position is a little different. Provoking as German diplomacy was, Germany had a genuine grievance against the other Great Powers in the Disarrna- Inca Conference. But I can see no ground of for saying that Germany was denied a position of equality in the League. She was a permanent member of the Council, and I should say frorri my own experience' that in the League in general there was • rather a speCial desire to show friendliness to Germany—at any rate before the Hitler revolution. After that event the equality remained, but the syMpathy went over to DollfusS and the other victims of Iiitlerism; Mein Kampf makes claims which no international tribunal is likely to approve.

The Italian case against Abyssinia, such as it is, was stated in a last-minute document issued when the invasion was already starting. The Japanese invaded Manchuria silently without ever putting any case before the League at all. But in both disputes the decision of the League, however favourable, would have been based on the judgement of the general community of nations, and that is just what Italy and Japan utterly reject. "'No power on earth," says Mussolini, " shall stand between -the Italian people and its will." That is a clear principle, a principle involving the denial of all law and justice between nations, and therefore a rejection of the League. The League will not revise treaties or alter the status quo merely to appease the ambition of a grasping and heavily armed Power.

These disputes all come .back to one issue. Does a nation insist on being judge in its own cause, or will it submit to the judgement of the community of nations ? Perhaps , it is hard for any nation to give an unqualified answer. There must be some limitations. But, in general, it is a choice between force and persuasion. In an anarchical world the way to get your will is to increase your armaments, threaten war and blackmail the tribunal. In, the sort of world which, amid many imperfections, we hOpe that -the League of Nations is • now creating, those are exactly the means for setting the Court against you.