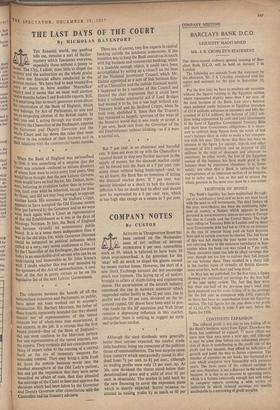 THE LAST DAYS OF THE COURT

T1-he financial world, my postbag tells me, remains a sort of thriller- ;, mystery which fascinates everyone, , especially those without a penny to invest, The City, I admit, does little to dispel the to and the authorities on the whole prefer wave our financial affairs conducted in the _ greatest secrecy. We have had to wait twenty-five Years n ars or more to have another 'Macmillan' "cluitY and it seems that we must wait another twelve months before Lord Radcliffe reports. Still, ;; is surprising that so much ignorance exists about the constitution of the Bank of England, which _°10w belongs, by Act of Parliament, to you and 11e as taxpaying citizens of the British realm. In ` et, You and I, acting through our trusty repre- sentative the Chancellor of the Exchequer, appoint the Governor and Deputy Governor and the whole Court and lay down the rules they must „userve in the conduct of their business and in their relations with the commercial banks outside.

When the Bank of England was nationalised Itt 1946 it was something of a surprise that the court was retained—reduced to sixteen directors °f whom four were to retire every four years. One would have thought that the new Labour Govern- ment would have sacked the lot. Mr. Dalton, how- ever, believing in evolution rather than in revolu- tion, took over what he inherited, except for four he chose, and did not stay long enough to appoint another batch. His successor, Sir Stafford Cripps, later to have accepted the Old Etonian names later put forward by the Governor and so we were soon back again with a Court as representative of the old Establishment as it was in the days of Montagu Norman. In fact, the Bank of England has become virtually an autonomous public board. It is in a sense more independent than it Was in the old days, for, while Governor Norman Could be subjected to political influence when called to a very, very secret conference at No. 11 13Y the Chancellor of the Exchequer, the Governor today is an unsackable civil servant who can be as undeviating and immovable as Sir John Soane's Wall. I doubt whether this was ever intended by the sponsors of the Act of nationalisation. A revi- sion of the Act is pretty certain to be on the legislative list of the next Labour Government.

* * The relations between the boards of all the nationalised industries and Parliament, or public, have never yet been worked out to anyone's satisfaction. Mr. Herbert Morrison, the father of these boards, apparently intended that they should consist not of representatives of the vested interests but of whole-time men experienced, if not experts, in the job. It is strange that the first board created—that of the Bank of England— did not even conform to the Morrison pattern but was representative of the vested interests, not the experts. They certainly did not contribute any- thing of expert value to the running of a central bank or the use of monetary weapons for economic control. They may bring a little fresh air from the outside business world into the rarefied atmosphere of the Old Lady's parlour, but one got the impression that they were never consulted on affairs of state, that they attended the meetings of the Court to hear and approve the decisions which had been taken by the Governor and Deputy Governor after consultation with the Chancellor and his Treasury advisers. There are, of course, very few experts in central banking outside the academic economists. If the intention was to keep the Bank executives in touch with big business and commercial banking, which is a laudable enough object, it could have been accomplished by setting up a council on the lines of the National Investment Council which Mr. Dalton appointed as a sort of link between him- self as Chancellor and the outside financial world. I happened to be a member of this Council and formed the clear impression that it could have been a valuable ministerial aid if Lord Bridges had wanted it to be, but it was kept without any Treasury brief and Sir Stafford Cripps, when he took over, abolished it. Since then the Treasury has remained so happily ignorant of the ways of the financial world that it was ready to accept a 7 per cent. Bank rate from the Governor of the old Establishment without blinking—as if it were a normal act.

But 7 per cent. is an abnormal and harmful rate. It does not even tie up with the Chancellor's vaunted threat to stop any further increase in the supply of money, for the discount market could not be forced into the Bank at a 7 per cent. rate many times without being bankrupted—and, as we all know, the Bank has no intention of letting the discount market down. If 7 per cent. was merely intended as a shock to halt the domestic inflation it has no doubt had its effect and should now be superseded by a 6 per cent. rate, which is too high also except as a return to 5 per cent.