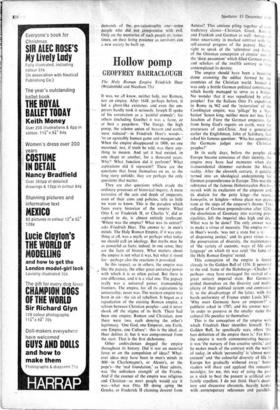 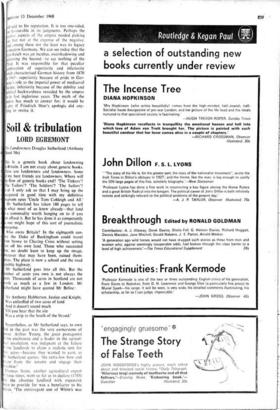 It was, we all know, neither holy, nor Roman, nor an empire. After 1648, perhaps before, it led a ghost-like existence, and even the em- perors hardly took it seriously. Joseph II spoke of his coronation as a 'painful cortredy'; for others (including Goethe) it was a farce, or at best a peepshow. The liturgy, the high pomp, the solemn union of heaven and earth, were reduced'—in Friedrich Heer's words— `to an agreeably human game and masquerade.' When the empire disappeared in 1806, no one mourned; nor, if truth be told, was there any- thing to mourn. And yet it had existed, in one shape or another, for a thousand years. Why? What function did it perform? - What aspirations did it represent? These are the questions that force themselves on us, as the long 'story unfolds; they are perhaps the only questions that matter.

They are also questions which evade the ordinary processes of historical inquiry. A mere narrative of the acts and deeds of emperors, even of their aims and policies, tells us little we want to know. This is the paradox which faces every historian of the empire. What Otto I, or Frederick II, or Charles V, did or aspired to do, is almost entirely irrelevant. 'Where was the empire? What was its centre?' asks Friedrich Heer. The answer is: in men's minds. The Holy Roman Empire, if it was any- thing at all, was a myth, or perhaps what today we should call an ideology. But myths may be as powerful as facts; indeed, in one sense, they are the facts of history. What matters about the empire is not what it was, but what it stood for—perhaps also the reactions it provoked.

In this respect, as in others, the empire-was like the papacy, the other great universal power with which it is so often paired. But there is one difference, and it is a vital one. The papacy really was a universal power, transcending frontiers. The empire, for all its aspirations to universality, never was. The western empire was born in sin—the sin of rebellion. It began as a repudiation of the existing Roman empire, a schism between Christian peoples—and it never shook off the stigma of its birth. There had been one empire, Roman and Christian; now there were two, each denying the other's legitimacy. 'One God, one Emperor, one Faith, one Empire, one Culture': this is the ideal, as Heer defines it; but it was compromised from the start. That is the first dichotomy.

Other ambivalences dogged the empire throughout its history. Did it rest on material force or on the compulsion of ideas? What- ever ideas may have been in men's minds in 800—in Charlemagne's, or Alcuin's, or the pope's—the 'real foundation,' as Heer admits, was 'the unbroken strength' of the Franks. And if the essence of the empire was religious and Christian—as most people would say it was—what was Otto III doing aping the Greeks,. or Frederick H claiming descent from

Aeneas? This anxious piling together of con- tradictory claims—Christian, Greek, Rorr.,.n, and Frankish and German as well—betrays inner uncertainty in marked contrast with the self-assured progress of the papacy. Heer is

right to speak of the 'splendour and frailty

, of the Ottonian conception of empire' anti of the 'deep pessimism' which filled German poets and scholars of the twelfth century as they contemplated its destiny.

countries of the Christian world. Instead it

was only a brittle German political contrivance which barely managed to serve as a bridge.

No wonder that it was repudiated by other peoples! For the Italians Otto I's expedition to Rome in 962 and the 'restoration' of the

Carolingian empire, was 'pillage' by a 'bar-

barian' Saxon king, neither more nor less. For Joachim of Fiore the German emperors, far from being God's -regents on earth,. were the

precursors of anti-Christ. And a generat;orr earlier the Englishman, John of Salisbury, had . asked his famous question: 'Who has appointed the Germans judges over the Christian peoples?'

In its early days, before the peoples of,: Europe became conscious of their identity, the empire may have, had moments when Abe transcendental shimmer outshone the bleak: reality. After the eleventh century, it quickly.,, turned into an ideological underpinning for,. German preponderance in Europe. This was-the substance of the .famous--Hohenstaufen Retells-, mystik with its .exaltation of the emperor and, its disdain . for. -the petty kings—the regali,,, kunegelin, or kinglets—whose place was pros,.„. trate at the steps of the emperor's throne. The collapse of German preponderance after 12% , the dissolution .of Gem any into warring prin-, cipalities, left the imperial idea high and dry... What was to be done? The only answer was , - to make a virtue of necessity. The empire no-k. , in Heer's worfis, 'was not a state but a sy, of dispensing justice,' and its great virtue w.is

*, the preservation of diversity, the maintenance of 'the variety of customs, ways of life and., language' on which (it was said) 'the fame..of., the Holy Roman Empire' rested.

This conception of the empire is found already in the Golden Bull of 1356. It persisted to the end. Some of the Habsburgs—Charles V perhaps—may have envisaged the revival of a great unitary imperial slate. But Germans ., prided themselves on the diversity and multi- plicity of their political system and contrasted

it, to the disadvantage of the latter, with the harsti.uniformity of France under Louis XIV. 'Why must Germany have an emperor?' a publicist asked in 1787; and his answer was: 'in order to preserve in the smaller states the cultural life peculiar to themselves.'

This is the conception of the empire with which •Friedrich Heer identifies himself. The

best definition of the empire there is.' For him, the empire is worth commemorating because

it was 'the nursery of free creative spirits,' and

he makes much of the contrast with the world of today, in which 'personality' is 'almost non-

existent' and 'the colourful diversity of life in

Europe has gradually withered away.' Some readers will share and applaud this romantic

nostalgia; for me, this way of using the past

as a stick to beat the present is artificial and faintly repellent.- I do not think Heer's desul- tory and discursive chronicle, heavily larded with contemporary references and parallels,

di add to his reputation. It is too one-sided, vo favourable in its judgments. Perhaps the ositi‘e aspects of the empire needed picking ;id: but not at the expense of the negative. tod among these not the least was its legacy to modern Germany. We can see today that the First Reich was an incubus, overshadowing and deforming the Second—to say nothing of the Third. It was responsible for that peculiar ornbination of superiority and inferiority which characterised German history from 1870 101945—superiority because of pride in Ger- luny's role as the imperial power of mediaeval Europe, inferiority because of the debility and political backwardness revealed by the empire m its last inglorious years. The myth of the empire has much to answer for; it would be I pity if Friedrich Heer's apologia did any-

Nag to revive it.