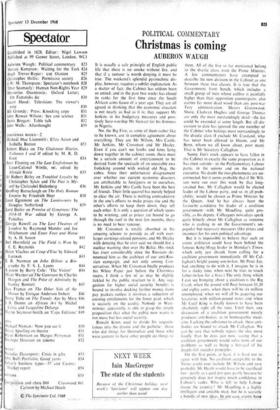 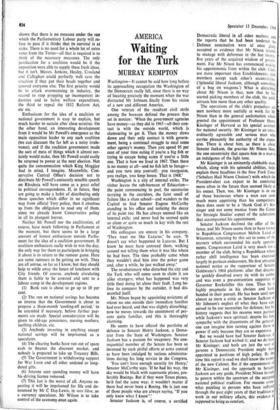 It is usually a safe principle of English public life that there is no smoke without fire, and that if a rumour is worth denying it must be true. The weekend's splendid pyrotechnic dis- play, however, requires a subtler explanation. As a matter of fact, the Cabinet has seldom been so united, and in the past two weeks has closed its ranks for the first time since the South African arms fiasco of a year ago. They are all agreed in thinking that the economic situation is not nearly as bad as it is; they support Mr Jenkins in his budgetary measures and posi- tively hero-worship Mr Stewart for his firmness in Nigeria.

No, the Big Five, as some of them rather like to be known, are in complete agreement about everything. They are Mr Wilson, Mrs Castle, Mr Jenkins, Mr Crossman and Mr Healey. Even if you can't see lambs and lions lying down together in the cabinet room, there must be a certain amount of entertainment to be derived from the spectacle of an uneatable ewe frolicking around with wicked old Nag, the cobra. Since their unfortunate disagreement over whether our current economic disasters are attributable to foreigners or to ourselves. Mr Jenkins and Mrs Castle have been the best of friends. Their little quarrel has merely helped to clear the air. There is nothing contradictory in the one's efforts to make prices rise and the other's efforts to keep them down, they tell each other. It is only a question of which seems to be winning, and as prices are bound to go through the roof in the next few months, there is no need to bear rancour.

Mr Crossman is totally absorbed in his amusing scheme to provide us all with ever- larger earnings-related pensions, and Mr Healey with denying that he ever said we should fire a nuclear warning shot over the Baltic. His stock has risen considerably since the Russians de- nounced him as the architect of our anti-Rus- sian campaign, and not only among Con- servatives. When Mr Cross-man finally produces his White Paper just before the Christmas recess, I think a few of us may be slightly tickled by the public reaction to it. Any sug- gestion for higher social security benefits is bound to involve docking further money from pay packets (unless it involves a reduction of existing entitlements for the lower paid, which is scarcely on the cards). Nobody in West- minster, apparently, is able to grasp the simple proposition that what the public now wants is not morebut less social security.

Ronald Knox used to divide his acquain- tances into the drastic and the pathetic: those who did things for themselves and those who were content to have other people do things to

them. All of the five so far mentioned belong to the drastic class, even the Prime Minister. A few commentators have attempted to describe the new division in the Cabinet as one between these two classes. It is true that the Government front bench, which includes a small group of men whose calibre is painfully higher than their opposition counterparts, also carries far more dead wood than any post-war Tory administration. Messrs Greenwood. Shore, Cledwyn Hughes and George Thomas are only the most outstandingly dead—the list could be extended at some length. But all dis- cussion to date has ignored the one member of the Cabinet who belongs most outstandingly to the drastic class (1 exclude Mr Crosland, whp has never been allowed to bloom, and Mr Berm whom we all know about, poor man). That is Mr Secretary Callaghan.

Sunny Jim's stock appears to have fallen in the Cabinet in exactly the same proportion as it has risen outside—in the Parliamentary Labour party, in the unions and on the national executive. No doubt the two phenomena are un- connected, but it seems probable that if Mr Wil- son were run over this week by that long- awaited bus, Mr Callaghan would be elected leader of the Labour party, and so. in all prob- ability, would be chosen as Prime Minister by the Queen. And he has always been the favourite candidate for leader of a coalition government—with Mr Maudling, quite oral- sibly, as his deputy. Colleagues nowadays speak quite bitterly about Mr Callaghan as someone who is cashing in on the Government's un- popular but necessary measures (like prices and incomes) for his own political advantage. •

But it is impossible to believe that such an astute politician could have been behind the famous King-Mogg leader in Monday's Times, which only just shrank from calling for a coalition government immediately. (If Mr Cal- laghan's bright young son-in-law, Mr Peter Jay, had anything to do with it, I imagine he is in for a sticky time, when next he tries to touch father-in-law for a fiver.) The only thing which 1 can sec bringing about a coalition- is the Big Crash, when the pound will float between $1.20 and eighty cents, when there will be six million unemployed, when we will all be papering our lavatories with million-pound notes and when Mr Cecil King is finally known to have been absolutely right all the time. Until then, any discussion of a coalition government merely produces anti-bodies, as in homeopathic medi- cine. Lacking the substance to attack, these anti- bodies are bound to attack Mr Callaghan. We can be sure that nobody rejects the idea more loudly than he does just now. saying that a coalition government would solve none of our problems as well as being a betrayal of his deeply-felt socialist principles.

'On the first point, at least, it is hard not to agree with him. No coalition acceptable to the Tories could ever include Mr Wilson and very probably Mr Heath would have to be sacrificed too—partly as a quid pro quo. partly because he genuinely does not inspire much confidence in Labour's ranks. Who is left to help Labour rescue the country? Mr Maudling is a highly intelligent and amiable man, but he is scarcely a bundle of new ideas, In any case events have

; .•: , shown that there is no measure under the sun which the Parliamentary Labour party will re- fuse to pass if it thinks that its survival is at stake. There is no need for a whole lot of extra votes from the Tories—all that is required is to think of the necessary measures. The only justification for a coalition would be if the opposition were able to supply these fresh ideas, but it isn't. Messrs. Jenkins, Healey, Crosland and Callaghan could perfectly well save the situation if they put their heads together and ignored everyone else. The first priority would be to attack overmanning in industry, the second to stop propping up incompetent in- dustries and to halve welfare expenditure, the third to repeal the • 1832 Reform Act, etc etc.

Enthusiasm for the idea of a coalition or national government is easy to explain, but much harder to sustain after close scrutiny. On the other hand, an interesting development from it would be Mr Powell's emergence as the main opposition leader to any such coalition (we can discount the far left as a noisy irrele- vance), and if the coalition government made the sort of mess of things which it almost cer- tainly would make, then Mr Powell could easily be returned to power at the next election. Not quite the consummation which King Moggjay had in mind, I imagine. Meanwhile, Con- servative Central Office's decision not to distribute Mr Powell's eminently sensible speech on Rhodesia will have come as a great relief to political correspondents. If, in future, they are going to make a habit of distributing only those speeches which differ in no significant way from official Tory policy, then it absolves us from the obligation to read any of them, since we already know Conservative policy in all its plangent horror.

Neither Mr Powell nor the coalitionists, of course, have much following in Parliament at the moment, but there seems to be a large amount of honest enthusiasm outside Parlia- ment for the idea of a coalition government. If coalition enthusiasts really wish to win the day, the only way for them to participate in bringing it about is to return to the rumour game. Here are some rumours to be getting on with. They are all untrue, so far as I know, but they should help to while away the hours of luncheon with City friends. Of course, anybody circulating them is liable to be arrested and sent to a labour camp in the development regions.

(2) The run on national savings has become so intense that the Government is about to propose a three-month 'cooling-off period,' to be extended if necessary, before further pay- ments are made. Special consideration will be given to old-age pensioners, nursing mothers, teething children, etc.

(3) Anybody investing in anything except national savings will be imprisoned as a speculator.

(4) The clearing banks have run out of spare cash to finance the discount market, and nobody is prepared to take up Treasury Bills.

(5) The Government is withdrawing support for War Loan and all other undated or long- dated gilts.

(6) Anyone seen spending money will have his driving licence removed.

(7) This last is the worst of all. Anyone re- peating it will be imprisoned for life and de- nounced by Mr C Day-Lewis, in vers fibre, as a currency speculator. Mr Wilson is to take control of the econommage,agaiu,