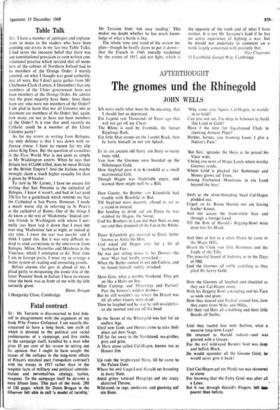 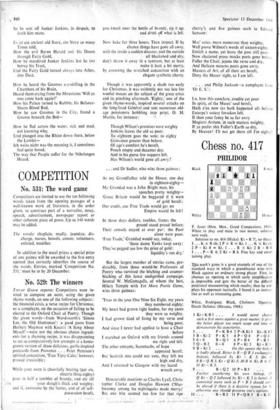 The gnomes und the Ithinegold

Ich weiss nicht what must be the meaning, that I should feel so depressed, EM Legend von Thousands of Years ago that will not get off my Chest: The Rhine is cool by Eventide, the Sunset Ripplings flash, Ein little Man stands on the Lorelei Rock, then he hurls himself in mit em n Splash.

Es ist em n ancient old Story, em n Story so many times told, Von how the Gnomes once hoarded up the Nibelungen Gold, How Siegfried gave it to Kriemhild as a small matrimonial Gift, Though Hagen was frightfully angry, und warned there might well be a Rift.

How Gunter, the Brother son Kriemhild, had trouble with Brunhild in Bed, Till Siegfried most decently offered to act as a stand-in instead, But bending to drink auf em n Picnic he was stabbed by Hagen, the Swine, Und his Brothers in Law did their Nuts as you say and they dropped all the Lot in the Rhine.

Dann Kriemhild got married to Etzel, better known as Attila the Hun.

Und asked old Hagen over for a bit of barbarian Fun :

When the Butler rushed in mit em n Cutlass, and he found himself rudely attacked.

Mein Gott, what a terrible Weekend. They got on like a Hairs on fire:

What Cuttings and Thrustings and Parries! Past the hostess's wildest desire—

So the Secret of the Rhinegold was lost for an endless Age.

Until new Gods and Heroes came to take their place auf dem Stage,

Till far far away in the Northland, sea-girdles, grey and grim,

A Hero arose called Cal-Hagen, known too as Honest Jim.

Up rode the bright-eyed Hero, till he came to the Palace Gate.

Can you not see, I'm deep in Schemes to build this Land in Gold?

Have I the time for big-chinned Clods in clanking Armour Plate?

Heraus, hems, you beaming Loon, I plot a Nation's Fate.'

'But Sire,' u,pspake the Hero as he prized his Vizor wide, 'I bring you news of Magic Lands where worthy Gnomes reside, Where Gold is plucked like Buttercups and Money grows auf Trees,

Among Enchanted Mountains in em n Land beyond the Seas.'

Swift as the silver-threading Snail Cal-Hagen plodded out, Urged on by Baron Harald mit ein hissing leather Knout, And out across the foam-white Seas and through a foreign Land Till the Rim of Harald's Begging-Bowl wore deep into his Hand.

And then at last in a silver Dawn he came to the Magic Hills, Heard the Clink von little Hammers und the Jingle of the Tills,

The peaceful Sound of Industry as in the Days of Old,

Uud' the Gnomes all softly yodelling as they ' piled the heavy Gold.

How the Gnomes all laughed und chuckled as they saw Cal-Hagen come.

With his Begging Bowl a-dangling and his Face so sunk and glum, How they danced and flocked around him, how they came from Miles and Miles, Mit their red Hats all a-bobbing und their little Beards all Smiles.

Und they loaded him with Bullion, what a massive long-term Loan!

He returned to Harald radiant—and was greeted with a Groan: For the evil wild-eyed Baron's Soul was deep and hellish Black,

He would squander all the Gnome Gold, be would never give it back!

Und Cal-Hagen auf em n Picnic too was skewered to atone For knowing that the Fairy Gold was after all a Loan.

But it ran through Harald's Fingers. left him poorer than before.

So he sent off Junker Jenkins, in despair, to fetch him more.

Es ist em n ancient old Story, em n Story so many Times told, How the evil Baron Harald met his Doom through Fairy Gold, How he murdered Junker Jenkins lest he too betray his Trust, Und the Fairy Gold turned always into Ashes, into Dust.

How he heard the Gnomes a-yodelling in the Chambers of his Brain, Heard them crying from the Mountains 'Will ye noo come back again?'

How his Palace turned to Rubble, his Balance- Sheets Blood Red, How he saw Gnomes in the City, found a Gnome beneath the Bed— How he fled across the water, sick and mad, not knowing why, Und plunged into the Rhine down there, .below the Lorelei- ' Ich weiss nicht was the meaning is, I sometimes feel quite bored, The way that People suffer for the Nibelungen Hoard.