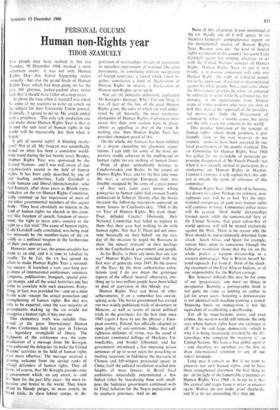 Few people may have realised it, but last Tuesday, 10 December 1968, marked a most important event: it was not only Human Rights Day—this festive happening recurs annually—but also the grand finale of Human Rights Year, which had been going on for the past 366 glorious, justice-packed days (what luck that it should have fallen on a leap year).

At about the time when it started I was asked by some of my Students to write an article on the subject for their University Union journal.

Naturally. I agreed to do-so. MY article ended with a prophecy: 'The-only safe prediction one

can make about Human Rights Year is that at its end the sum total of human rights in the world will be measurably less than when it began.'

A gift of second sight? A blinding revela- tion? Not at all. My forecast was scientifically based on what has been a consistent world- wide-trend during the last twenty years. Besides, HUtfian Rights Year was sponsored by the United Nations—and I was well aware of that organisation's record in. the field of human rights. It has been aptly described by one of otir :leading authorities; Lady .Gaitskell—a t.Lily humane and liberal internationalist—who 1.1stlanuary, after three years as British repre- entative on the UN Human Rights Committee, -,,tdIr summed up her impression of most of tht. other governmental members of this august hotly : They have absolutely no interest in the kind of human rights we cherish in this coun- trsi.' like freedom of speech, freedom of move- ment, the right to leave one's country -or the right to a fair trial.' The cause of human rights, I ady:Gaitskell sadly concluded, was being used for misused) by the member-states of the UN ,olely as a political weapon in the furtherance of their own devious ends.

However, now at last, the annus mirabilis has coil* to an end, and it is time to tabulate its results. To be fair, the UN has spared no effort to make Human Rights Year a resound- ing success. It launched a vast, year-long pro- gramme -of international conferences, seminars, symposia, publications, banquets, special post- age Stamps, and all the usual festivities one has come to associate with such occasions. Every- thing, in fact, was provided for—and on a mint lavish scale—except the protection and strengthening of human rights. But that was only to be expected, since the vast majority of governments making up the UN would not recognise a human right if they met one.

This elementary truth was suitably illus- trated at the great International Human Rights Conference held last year in Teheran –a legendary stronghold of liberty. The highpoint of the conference was the com- munication of a message from Mr Kosygin,

tsho exhorted the delegates `to make the United Nations' activities in the field of human rights even more effective.' The message received a glowing welcome from the serried ranks of official defenders of human rights. They all. knew, of course, that Mr Kosygin presides over a government which, on any count, is—and has been for the past fifty years—the most re- pressive and brutal in the world. They knew about its bloody purges, its mass arrests, its faked trials, its slave labour camps, its de-

And yet the delegates deliriously applauded Mr Kosygin's message. Why? For one thing, it

was all part of the fun, of the great Human Rights game, the rules of which are well under- stood by all. Secondly, the most vociferous champions of Human Rights in abvtracio were aware that their own records were in places almost as appalling as that of the USSR. If nothing else, then Human Rights Year has provided abundant proof of this.

On the whole, my forecast has been fulfilled to a degree exceeding my gloomiest expec- tations. I can only list some of the most im- pressive results achieved in the snuffing-out of human rights (to say nothing of human lives).

Pride of place undoubtedly belongs to Czechoslovakia and Biafra. In the course of Human Rights Year, and for the first time since the war, a sovereign European state was forcibly occupied by the army of a great power —of that very same great power whose panegyrics to human rights had aroused frantic enthusiasm in Teheran. Shortly after the Soviet invasion the following inscription appeared on many houses in Czechoslovakia: '1968 is the UN Year of Human Rights. We want them.' Poor. deluded Czechs! Obviously, their National Committee had failed to explain to them that their case had nothing to do with human rights. Not that U Thant did not inter- vene heroically on their behalf—on the very day of the invasion he urged the Russians to show 'the utmost restraint' in their dealings with the Czechoslovak government and people.

As for Biafra, is there any more that one can say? Human Rights Year coincided with the first war of genocide .since 1945. In the course of the Year, by the most authoritative calcu- lations (and I do not mean the grotesque reports of the official 'neutral' observers), any- thiniup to two million people have been killed or died of starvation in this bloody war.

Human Rights Year can boast of other achievements, if on a somewhat less awe-in- spiring sCale. The Soviet government has carried out two widely publicised trials of dissenters in Moscow, as well as scores of secret political trials in the provinces; for the first time since 1945 (again I have to use the phrase) a Euro- pean country, Poland, has officially adopted an open policy of -anti-semitism; India, that self- righteous defender of virtue, was the sceneof constant communal killings of Moslems, Un- touchables, and border tribesmen, and her government introduced a law imposing prison sentences of up to seven years for preaching or inciting secession; in Indonesia the massacre of Chinese and left-wingers proceeded apace; in China itself the cultural revolution reached new heights of mass lunacy; in Brazil local authorities successfully exterminated a few Indian tribes by inoculating them with small- pox; the Sudanese government continued with its Final Solution for the Negro population of its southern provinces. And so on.

None of this, of course, is ever mentioned at the UN. Hardly any of it will appear in the

Secretary-General's comprehensive report on the monumental success of Human Rights Year. Because, you see, 'the kind of human rights we cherish in this country' (to quote Lady Gaitskell again) has nothing whatever to do with the United Nations' concept of Human Rights. Human Rights Year, to put it very briefly. is in essence concerned with only one Human Right: the right of coloured people not to be oppressed. ill-treated or discriminated against by white people. Not a soul cares about the ill-treatment of white by white, or coloured

by coloured. or even white by coloured (as. for instance. in the deportations from African states of white residents who were too slow to doff their hats at the approach of the presiden- tial motor-cadet. Only the ill-treatment of coloured by white: a worthy cause, but surely not the only cause for concern in the world.

This peculiar limitation of the concept of human rights which, thank goodness, is pro- foundly alien to the vast majority in our country- seems to have been accepted by our local practitioners of the double standard. The UK Committee for Human Rights Year 1968 has called for an avalanche of postcards ex- pressing disapproval of Mr Enoch Powell—yet when it was recently invited to participate in a conference on 'Human Rights in Marxist- Leninist Countries' it icily replied that 'this sub- ject is outside the terms of reference of this committee.'

Human Rights Year 1968, with all its horrors, has drawn to a close. Perhaps no ordinary, non- righteous year will be as bad. Yet the inter- national conspiracy of cant over human rights will continue in force. Communist police states will be praised. 'third world' dictatorships fawned upon, while the concentrated fury of the United Nations, that great colour-bar of world opinion, will still be turned exclusively against the West. There is no reason whY' the West should be indiscriminately defended from attack : South Africa and Spain, for example, remain blots upon its conscience (though the Gibraltar resolution shows that the UN. on the whole, prefers a western dictatorship to a western democracy). Nor is Britain herself be- - yond reproach. Far from it: think of the shock- ing treatment of the East African Indians, or of our responsibility for the Biafran carnage.

But, however difficult this may be for some of our 'progressives,' one must sec things in perspective. Banning a pornographic book is not quite the same as sending an author to jail for seven years. Arresting a demonstrator is not identical with machine-gunning a crowd. Imposing limits on immigration is not the equivalent of establishing a death-camp.

For all its imperfections, errors and even crimes, the western world still remains the only area where human rights have any existence at all. It is, by and large, democratic—which is why it is being ferociously attacked by the dic- tatorships who comprise the majority oc United Nations. We have a free public opiak:z —and therefore we ourselves are the first to draw international attention to any of our rulers' misdeeds.

Long may it remain so. But if we want to preserve our own human rights, and to have them strengthened elsewhere; the first thing to do—in the light of the lamentable cr perience of Human Rights Year 1968—is to see to it that this cynical and tragic farce is neser re-enacted again. Wolves do not make grsod shepherds. and It is no use pretending th-A they do. '