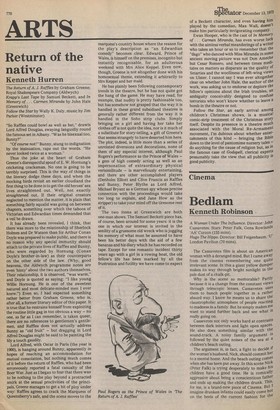 Return of the native

The Return of A. J. Raffles by Graham Greene; Royal Shakespeare Company (Aldwych) Krapp's Last Tape by Samuel Beckett, and In Memory of . . . Carmen Miranda by John Hale (Greenwich) Follow the Star by Wally K. Daly, music by Jim Parker (Westminster) "So Raffles could bowl as well as bat," drawls Lord Alfred Douglas, swaying languidly round the famous set in Albany. "Was he bisexual too, Bunny?"

"Of course not!" Bunny, stung to indignation by the insinuation, raps out the words. "He never looked twice at a woman."

Thus the joke at the heart of Graham Greene's disrespectful spoof of E. W. Hornung's cricketing cracksman. No one is going to be terribly surprised. This is the way of things in the literary dodge these days, and when the mocking birds revisit an earlier cloudland the first thing to be done is to get the old heroes' sex lives straightened out. Well, not exactly straightened out. If their original creators neglected to mention the matter, it is plain that something fairly squalid was going on between chapters, something over which the taboos of Victorian and Edwardian times demanded that a veil be drawn.

It has already been revealed, I think, that there was more to the relationship of Sherlock Holmes and Dr Watson than Sir Arthur Conan Doyle was prepared to make public, and there is no reason why any special immunity should attach to the private lives of Raffles and Bunny, who were regarded by Hornung (Conarr Doyle's brother-in-law) as their counterparts on the other side of the law. (Why, good heavens, the Aldwych programme notes are even 'hinty' about the two authors themselves. Their relationship, it is observed, "was warm," and Doyle is quoted as saying: "I like young Willie Hornung. He is one of the sweetest natured and most delicate-minded men I ever knew.") Even so, I had expected something rather better from Graham Greene, who is, after all, a former literary editor of this paper. It is true that he restrains himself from exploiting the routine little gag in too obvious a way — no one, as far as 1 can remember, is taken queer, there are no references to gentlemen's gentlemen, and Raffles does not actually address Bunny as "old fruit" — but dragging in Lord Alfred Douglas might be said to be painting the lily a touch gaudily.

Lord Alfred, with Oscar in Paris (the year is 1900), is hanging around Bunny, apparently in hopes of reaching an accommodation for mutual consolation, but nothing much comes of it before the return of Raffles, who had been erroneously reported a fatal casualty of the Boer War. Just as I began to fear that there was to be nothing to the play beyond a protracted smirk at the sexual proclivities of the principals, Greene manages to get a bit of ploy under way: Raffles agrees to crack the Marquess of Queensberry's safe, and the scene moves to the marquess's country house where the reason for the play's description as "an Edwardian comedy" becomes clear. Edward, Prince of Wales, is himself on the premises, incognito but instantly recognisable, for an adulterous weekend with Mrs Alice Keppel. Even now, though, Greene is not altogether done with his homosexual theme, extending it arbitrarily to Mrs Keppel and her maid.

He has plainly been following contemporary trends in the theatre, but he has not quite got the hang of the game. He may have read, for example, that nudity is pretty fashionable too, but has somehow not grasped that the way it is handled in these grand subsidised theatres is generally rather different from the way it is handled in the Soho strip clubs. Simply bringing on a girl and having her take her clothes off is not quite the idea, nor is it much of a substitute for story-telling, a gift of Greene's that seems strangely to have deserted him here. The plot, indeed, is little more than a series of unrelated diversions and decorations, none of them of any especial interest, although Paul Rogers's performance as the Prince of Wales — a gem of high comedy acting as well as an impersonation of extraordinary physical verisimilitude — is marvellously entertaining, and there are other accomplished players (Denholm Elliott and Clive Francis as Raffles and Bunny, Peter Blythe as Lord Alfred, Michael Bryant as a German spy whose precise connection with the proceedings would take too long to explain, and Jane How as the stripper) to take your mind off the tiresome rest of it.

The two items at Greenwich are both one-man shows. The Samuel Beckett piece has, of course, been around for some years: it is the one in which our interest is invited in the senility of a gruesome old wreck who is jogging his memory of what must be assumed to have been his better days with the aid of a few bananas and his diary which he has recorded on tape. Except for one romantic incident thirty years ago with a girl in a rowing boat, the old fellow's life has been marked by all the frustration and futility we have come to expect of a Beckett character, and even having him played by the comedian, Max Wall, doesn't make him particularly invigorating company.

Ewan Hooper, who is the cast of In Memory of . . . Carmen Miranda, has even worse luck with the aimless verbal meanderings of a writer who takes an hour or so to remember that the "dago" who danced with Miss Miranda in some ancient moving picture was not Don Ameche but Cesar Romero, and between times meditates on matters as disparate as the quality Of Smarties and the woolliness of left-wing views on Ulster. I cannot say I was ever altogether clear on whether John Hale, the author of the work, was asking us to endorse or deplore the fellow's opinions about the Irish troubles, an ambiguity conceivably designed to confuse terrorists who won't know whether to leave a bomb in the theatre or not.

Follow the Star, an early arrival among children's Christmas shows, is a musical comic-strip treatment of the Christmas story itself. Despite its presence in a theatre much associated with the Moral Re-Armament movement, I'm dubious about whether entertainments of this kind — bringing the Bible down to the level of pantomime nursery tales — do anything for the cause of religion but, as in the famous case of Gods pelt, clerical experts presumably take the view that all publicity is good publicity.