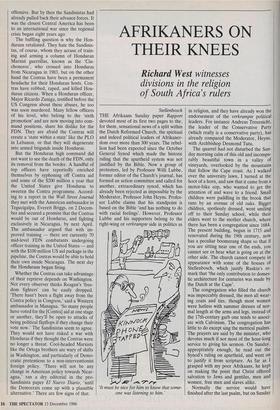 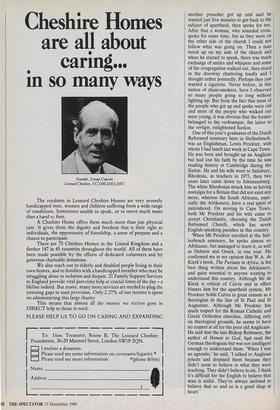 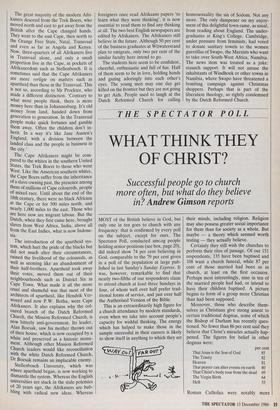 AFRIKANERS ON THEIR KNEES

divisions in the religion of South Africa's rulers

Stellenbosch THE Afrikaans Sunday paper Rapport devoted most of its first two pages to the, for them, sensational news of a split within the Dutch Reformed Church, the spiritual and indeed political leaders of Afrikaner- dom over more than 300 years. The rebel- lion had been expected since the October General Synod which made the historic ruling that the apartheid system was not justified by the Bible. Now a group of protesters, led by Professor Willi Lubbe, former editor of the Church's journal, has formed an action committee and called for another, extraordinary synod, which has already been rejected as impossible by the Moderator, Professor John Heyns. Profes- sor Lubbe claims that his standpoint is based on the Bible 'and has nothing to do with racial feelings'. However, Professor Lubbe and his supporters belong to the right-wing or verkrampte side in politics as `It must be nice for him to know that some- one was listening to him.' in religion, and they have already won the endorsement of the verkrampte political leaders. For instance Andreas Treumicht, the leader of the Conservative Party (which really is a conservative party), has already compared the Moderator, Heyns, with Archbishop Desmond Tutu.

The quarrel had not disturbed the Sun- day morning calm of this old and incompa- rably beautiful town in a valley of vineyards, overlooked by the mountains that follow the Cape coast. As I walked over the university lawn, I turned at the hoot of a horn, and saw that it came from a motor-bike cop, who wanted to ,get the attention of and wave to a friend. Small children were paddling in the brook that runs by an avenue of old oaks. Bigger children, spotlessly dressed, went smiling off to their Sunday school, while their elders went to the mother church, where there has been a congregation since 1684. The present building, begun in 1715 and renovated during the 19th century, now has a peculiar boomerang shape so that if you are sitting near one of the ends, you cannot see or hear what is going on at the other side. The church cannot compete in appearance with some of the houses of Stellenbosch, which justify Ruskin's re- mark that 'the only contribution to domes- tic architecture for centuries was made by the Dutch at the Cape'.

The congregation who filled the church was impeccably dressed, the men all wear- ing coats and ties, though most women were hatless with summer dresses of nor- mal length at the arms and legs, instead of the 17th-century garb one tends to associ- ate with Calvinism. The congregation has little to do except sing the metrical psalms. The prayers are said by the minister, who devotes much if not most of the hour-long service to giving his sermon. On Sunday, appropriately enough, he read out the Synod's ruling on apartheid, and went on to justify it from scripture. As far as I grasped with my poor Afrikaans, he kept on making the point that Christ offered salvation to Jews and gentiles, men and women, free men and slaves alike.

Normally the service would have finished after the last psalm, but on Sunday another preacher got up and said he wanted just five minutes to get back to the subject of apartheid, then spoke for ten. After that a woman, who sounded cross, spoke for some time, but as they were on the other side of the church I could not follow what was going on. Then a man stood up on my side of the church and when he started to speak, there was much exchange of smiles and whispers and some of the congregation walked out, then stood in the doorway chattering loudly and I thought rather pointedly. Perhaps they just wanted a cigarette. Never before, in this nation of chain-smokers, have I observed so many people going so long without lighting up. But from the fact that most of the people who got up and spoke were old and most of the people who walked out were young, it was obvious that the former belonged to the verkrampte, the latter to the verligte, enlightened faction.

One of this year's graduates of the Dutch Reformed seminary here in Stellenbosch, was an Englishman, Lewis Prockter, with whom I had lunch last week in Cape Town. He was born and brought up an Anglican but had lost his faith by the time he was reading history at Cambridge during the Sixties. He and his wife went to Salisbury, Rhodesia, as teachers in 1973, then two years later came down to Johannesburg. The white Rhodesian struck him as having nostalgia for a Britain that did not exist any more, whereas the South Africans, espe- cially the Afrikaners, have a real spirit of nationhood. On moving to Cape Town, both Mr Prockter and his wife came to accept Christianity, choosing the Dutch Reformed Church, which has seven English-speaking parishes in this country.

When Mr Prockter enrolled at the Stel- lenbosch seminary, he spoke almost no Afrikaans, but managed to learn it, as well as Hebrew and Greek, in one year. He confirmed me in my opinion that W.A. de Klerk's book, The Puritans in Africa, is the best thing written about the Afrikaners, and quite essential to anyone wanting to understand this country. Although Mr de Klerk is critical of Calvin and in effect blames him for the apartheid system, Mr Prockter holds Calvin in great esteem as a theologian in the line of St Paul and St Augustine. Although Mr Prockter has much respect for the Roman Catholic and Greek Orthodox churches, differing only on theological grounds, he seems to have no respect at all for the poor old Anglicans. He said that the late Bishop Robinson, the author of Honest to God, had read the German theologians but was not intelligent enough to understand them. 'When I was an agnostic,' he said, 'I talked to Anglican priests and despised them because they didn't seem to believe in what they were teaching. They didn't believe in sin. I think it's difficult for the English to believe that man is sinful. They're always inclined to believe that so and so is a good chap at heart.' The great majority of the modern Afri- kaners descend from the Trek Boers, who moved north and east to get away from the British after the Cape changed hands. They went to the east Cape, then north to the Orange Free State, Natal, Transvaal and even as far as Angola and Kenya. Now, three-quarters of all Afrikaners live in Transvaal alone, and only a small proportion live in the Cape, in pockets of Afrikanerdom such as Stellenbosch. It is sometimes said that the Cape Afrikaners are more verligte on matters such as apartheid than those in the Transvaal. This is not so, according to Mr Prockter, who made a different distinction. 'Contrary to what most people think, there is more money here than in Johannesburg. It's old money from land, handed down from generation to generation. In the Transvaal people make quick fortunes and gamble them away. Often the children don't in- herit. In a way it's like Jane Austen's England, with a division between the landed class and the people in business in the city.'

The Cape Afrikaners might be com- pared to the whites in the southern United States, the Trek Boers to those who went West. Like the American southern whites, the Cape Boers suffer from the inheritance of a slave-owning past, the presence among them of millions of Cape coloureds, people of mixed race. Until about the end of the 18th century, there were no black Africans at the Cape or for 500 miles north, and nearly 1,000 miles to the east. Those who are here now are migrant labour. But the Dutch, when they first came here, brought slaves from West Africa, India, above all from the East Indies, what is now Indone- sia.

The introduction of the apartheid sys- tem, which hurt the pride of the blacks but did not much alter their circumstances, ruined the livelihood of the coloureds, as well as seeming like an abandonment of their half-brothers. Apartheid took away their votes, moved them out of their neighbourhoods such as District Six in Cape Town. What made it all the more cruel and shameful was that most of the architects of apartheid, like Hendrik Ver- woerd and now P.W. Botha, were Cape Afrikaners. It also explains why the col- oured branch of the Dutch Reformed Church, the Mission Reformed Church, is now bitterly anti-government. Its leader, Alan Boesak, saw his mother thrown out of their house, which is now occupied by a white and preserved as a historic monu- ment. Although other Mission Reformed Church leaders would like reconciliation with the white Dutch Reformed Church, Dr Boesak remains an implacable enemy. Stellenbosch University, which was where apartheid began, is now working to dismantle the system. Whereas the English universities are stuck in the stale polemics of 20 years ago, the Afrikaners are bub- bling with radical new ideas. Whereas foreigners once read Afrikaans papers 'to learn what they were thinking', it is now essential to read them to find any thinking at all. The two best English newspapers are edited by Afrikaners. The Afrikaners still believe in the future. Although 50 per cent of the business graduates at Witwatersrand plan to emigrate, only two per cent of the similar faculty here intend to go.

The students here seem to be confident, cheerful, enthusiastic and full of fun. Half of them seem to be in love, holding hands and gazing adoringly into each other's eyes. The young men may one day get killed on the frontier but they are not going to get Aids. People used to laugh at the Dutch Reformed Church for calling homosexuality the sin of Sodom. Not any more. The only dampener on my enjoy- ment of this delightful town came, as usual, from reading about England. The under- graduates at King's College, Cambridge, under pressure from feminists, had voted to donate sanitary towels to the women guerrillas of Swapo, the Marxists who want to take over South-West Africa, Namibia. The news item was treated as a joke: staunch support. It will not amuse the inhabitants of Windhoek or other towns in Namibia, where Swapo have threatened a bombing campaign against Christmas shoppers. Perhaps that is part of the liberation theology, so rightly condemned by the Dutch Reformed Church.