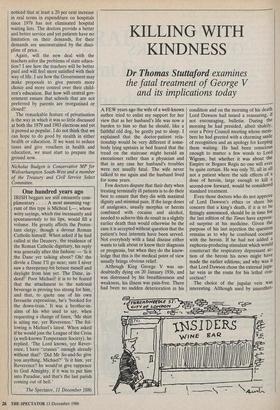 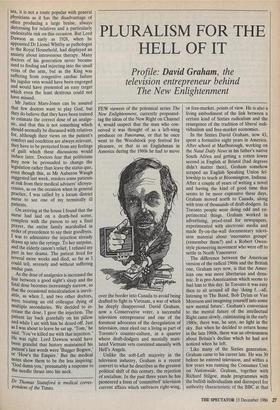 the fatal treatment of George V and its implications today

A FEW years ago the wife of a well-known author tried to enlist my support for her view that as her husband's life was now a burden to him so that he should, like a faithful old dog, be gently put to sleep. I explained that the doctor-patient rela- tionship would be very different if some- body lying upstairs in bed feared that the tread on the staircase might herald an executioner rather than a physician and that in any case her husband's troubles were not usually fatal. The wife never talked to me again and the husband lived for some years.

Few doctors dispute that their duty when treating terminally ill patients is to do their best to ensure that they die with maximal dignity and minimal pain. If the large doses of analgesics, usually morphia or heroin combined with cocaine and alcohol, needed to achieve this do result in a slightly earlier death than would otherwise be the case it is accepted without question that the patient's best interests have been served. Not everybody with a fatal disease either wants to talk about or know their diagnosis or prognosis, but when they do the know- ledge that this is the medical point of view usually brings obvious relief.

Although King George V was un- doubtedly dying on 20 January 1936, and was distressed by his breathlessness and weakness, his illness was pain-free. There had been no sudden deterioration in his condition and on the morning of his death Lord Dawson had issued a reassuring, if not encouraging, bulletin. During the morning he had presided, albeit shakily, over a Privy Council meeting whose mem- bers he had greeted with a charming smile of recognition and an apology for keeping them waiting. He had been conscious enough to mutter a few words to Lord Wigram, but whether it was about the Empire or Bognor Regis no one will ever be quite certain. He was only 70, all in all not a patient where the side effects of a dose of heroin, large enough to kill a second-row forward, would be considered standard treatment.

Even those doctors who do not approve of Lord Dawson's ethics or share his concern that a king's death, if it is to be fittingly announced, should be in time for the last edition of the Times have express- ed surprise at his medicine. Given the purpose of his last injection the question remains as to why he combined cocaine with the heroin. If he had not added a euphoria-producing stimulant which would counteract the respiratory depressant ac- tion of the heroin his news might have made the earlier editions; and why was it that Lord Dawson chose the external jugu- lar vein as the route for his lethal con- coction?

The choice of the jugular vein was interesting. Although used by anaesthet- ists, it is not a route popular with general physicians as it has the disadvantage of often producing a large bruise, always distressing for relatives and a particularly undesirable risk on this occasion. But Lord Dawson as early as 1928, when he appointed Dr Lionel Whitby as pathologist to the Royal Household, had displayed an anxiety about intravenous therapy. Many doctors of his generation never became used to finding and injecting into the small veins of the arm, but as the King was suffering from congestive cardiac failure his jugular vein would have been engorged and would have presented an easy target which even the least dextrous could not have missed.

Mr Justice Mars-Jones can be assured that few doctors want to play God, but they do believe that they have been trained to estimate the correct dose of an analge- sic, and that this is not something which should normally be discussed with relatives for, although their views on the patient's comfort and condition are always relevant, they have to be protected from any feelings of guilt which these discussions would induce later. Doctors fear that politicians may now be persuaded to change the legislation rather than leave the status quo, even though this, as Mr Auberon Waugh suggested last week, renders some patients at risk from their medical advisers' idiosyn- crasies, as on the occasion when in general practice, I was called by a locum district nurse to see one of my terminally ill patients.

On arriving at the house I found that the nurse had laid on a death-bed scene, complete with the parson to say a final prayer, the entire family marshalled in order of precedence to say their goodbyes. I was to administer the injection already drawn up into the syringe. To her surprise, and the elderly canon's relief, I refused my part in her drama. The patient lived for several more weeks and died, so far as I could tell, serenely and without suffering undue pain.

As the dose of analgesics is increased the line between a good night's sleep and the fatal dose becomes increasingly narrow, so that the occasional miscalculation is inevit- able, as when I, and two other doctors, were treating an old colleague dying of multiple secondaries. We decided to in- crease the dose, I gave the injection. The patient lay back gratefully on his pillow and while I sat with him he dozed off. Just as I was about to leave he sat up. 'Tom,' he said. 'You've killed me with that injection.' He was right. Lord Dawson would have been grateful that history maintained his patient's last words were 'Bugger Bognor,' or 'How's the Empire.' But the medical notes show them to be the less inspiring: `God damn you,' presumably a response to the needle thrust into his neck.

Dr Thomas Stuttaford is medical corres- pondent of the Times.