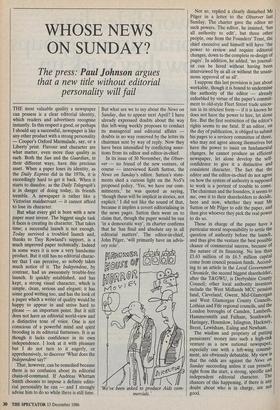 WHOSE NEWS ON SUNDAY?

that a new title without editorial personality will fail

THE most valuable quality a newspaper can possess is a clear editorial identity, which readers and advertisers recognise instantly. In this respect a good, or perhaps I should say a successful, newspaper is like any other product with a strong personality — Cooper's Oxford Marmalade, say, or a Liberty' print. Flavour and character are what matter, even more than quality as such. Both the Sun and the Guardian, in their different ways, have this precious asset. When a paper loses its identity, as the Daily Express did in the 1970s, it is exceedingly hard to get it back. When it starts to dissolve, as the Daily Telegraph's is in danger of doing today, its friends tremble. A newspaper is rather like a Victorian maidservant — it cannot afford to lose its character.

But what every girl is born with a new paper must invent. The biggest single task it faces is creating its character. That takes time; a successful launch is not enough. Today survived a troubled launch and, thanks to Tiny Rowland's support, is a much improved paper technically. Indeed in some ways it is now a very handsome product. But it still has no editorial charac- ter that I can perceive, so nobody takes much notice of it. The Independent, by contrast, had an awesomely trouble-free launch. It quickly established, and has kept, a strong visual character, which is simple, clean, serious and elegant; it has some good writing too, and has the look of a paper which a writer of quality would be happy to appear in and strive hard to please — an important point. But it still does not have an editorial world-view and a distinctive tone of voice. One is not conscious of a powerful mind and spirit brooding in its editorial fastnesses. It is as though it lacks confidence in its own independence. I look at it with pleasure but I do not turn to it eagerly, or apprehensively, to discover 'What does the Independent say?'

That, however, can be remedied because there is no confusion about its editorial chain-of-command. If Andreas Whittam Smith chooses to impose a definite edito- rial personality he can — and I strongly advise him to do so while there is still time. But what are we to say about the News on Sunday, due to appear next April? I have already expressed doubts about the way this left-wing weekly proposes to conduct its managerial and editorial affairs doubts in no way removed by the letter its chairman sent by way of reply. Now they have been intensified by conflicting asser- tions from its editor and editor-in-chief.

In its issue of 30 November, the Obser- ver — no friend of the new venture, of course — interviewed Keith Sutton, the News on Sunday's editor. Sutton's state- ments shed a curious light on the NoS's proposed policy. 'Yes, we have our com- mitments,' he was quoted as saying, `though these will be implicit in stories, not explicit.' I did not like the sound of that, because it implies a covert editorialising in the news pages. Sutton then went on to claim that, though the paper would be run `in a democratic way', its charter confirms that he 'has final and absolute say in all editorial matters'. The editor-in-chief, John Pilger, 'will primarily have an advis- ory role'.

`We've been asked to produce Aids com- mercials.' Not so, replied a clearly disturbed Mr Pilger in a letter to the Observer last Sunday. The charter gave the editor no such powers. The editor, he insisted, 'has all authority to edit', but three other people, one from the Founders' Trust, the chief executive and himself will have 'the power to review and require editorial changes, down to the complete re-design of pages'. In addition, he added, 'no journal- ist can be hired without having been interviewed by us all or without the unani- mous approval of us all'.

I suppose this last provision is just about workable, though it is bound to undermine the authority of the editor — already enfeebled by virtue of the paper's commit- ment to old-style Fleet Street trade union- ism in its strictest form — if it is known he does not have the power to hire, let alone fire. But the first restriction of the editor's rights seems to me fatal. If an editor, on the day of publication, is obliged to submit his pages to a revisory committee of three, who may not agree among themselves but have the power to insist on fundamental changes, he cannot produce an efficient newspaper, let alone develop the self- confidence to give it a distinctive and consistent character. The fact that the editor and the editor-in-chief do not agree on how the system of authority is supposed to work is a portent of trouble to come. The chairman and the founders, it seems to me, owe it to their shareholders to decide, here and now, whether they want Mr Sutton or Mr Pilger to edit the paper, and then give whoever they pick the real power to do so.

Those in charge of the paper have a particular moral responsibility to settle the question of authority before the launch, and thus give the venture the best possible chance of commercial success, because of the nature of its financing. No less than £3.63 million of its £6.5 million capital come from council pension funds. Accord- ing to an article in the Local Government Chronicle, the second biggest shareholder, after the T&GWU, is Derbyshire County Council; other local authority investors include the West Midlands MCC pension fund, Cleveland, Gwent, Mid-Glamorgan and West Glamorgan County Councils, Lothian and Fife regional councils, and the London boroughs of Camden, Lambeth, Hammersmith and Fulham, Southwark, Haringey, Hounslow, Islington, Hackney, Brent, Lewisham, Ealing and Newham: The wisdom and propriety of putting pensioners' money into such a high-risk venture as a new national newspaper, especially one with a left-wing commit- ment, are obviously debatable. My view is that the odds are against the News on Sunday succeeding unless it can present, right from the start, a strong, specific and independent editorial character. The chances of this happening, if there is any doubt about who is in charge, are not good.