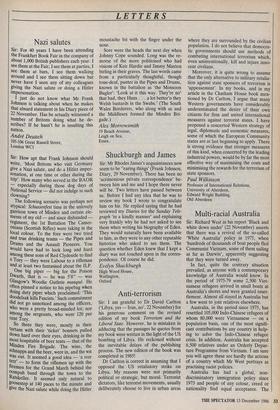 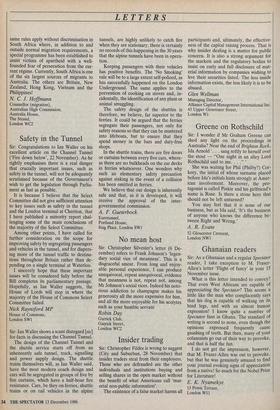 Sir: Richard West in his report 'Black and white down under' (22 November) asserts that there was a revival of the so-called `White Australia' policy in 1975, when `hundreds of thousands of boat people fled Communist Vietnam, some of them sailing as far as Darwin', apparently suggesting that they were turned away.

In fact, quite the contrary situation prevailed, as anyone with a contemporary knowledge of Australia would know. In the period of 1975-79 some 2,500 Viet- namese refugees arrived in small boats at Australia's shores and were granted reset- tlement. Almost all stayed in Australia but a few went to join relatives elsewhere.

Australia, in the period since 1975, has resettled 105,000 Indo-Chinese refugees of whom 80,000 were Vietnamese — on a population basis, one of the most signifi- cant contributions by any country in help- ing to solve the Indo-Chinese refugee crisis. In addition, Australia has accepted 6,500 relatives under an Orderly Depar- ture Programme from Vietnam. I am sure you will agree these are hardly the actions of a country which Mr West portrays as practising racist policies.

Australia has had a global, non- discriminatory immigration policy since 1973 and people of any colour, creed or nationality find equal acceptance. The

same rules apply without discrimination in South Africa where, in addition to and outside normal migration requirements, a special programme has been established to assist victims of apartheid with a well- founded fear of persecution from the cur- rent regime. Currently, South Africa is one of the six largest sources of migrants to Australia. The others are Britain, New Zealand, Hong Kong, Vietnam and the Philippines!