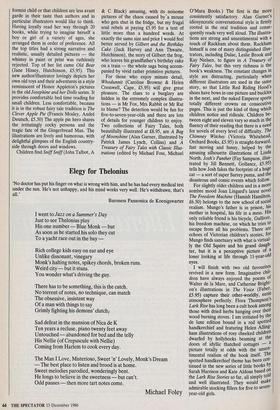 `No doctor has put his finger on what is wrong with him, and he has had every medical test under the sun. He's not unhappy, and his mind works very well. He's withdrawn, that's all.'

Baroness Pannonica de Koenigswarter I went to Jazz on a Summer's Day Just to see Thelonius play His one number — Blue Monk — but As soon as he started his solo they cut To a yacht race out in the bay — Rich college kids easy on ear and eye Unlike dissonant, vinegary Monk's halting notes, spikey chords, broken runs.

Weird city — but it stuns.

You wonder what's driving the guy.

There has to be something, this is the catch. No torrent of notes, no technique, can match The obsessive, insistent way Of a man with things to say Grimly fighting his demons' clutch/ Sad defeat in the mansion of Nica de K Ten years a recluse, piano twenty feet away Untouched — abandoned for bed and the telly His Nellie (of Crepuscule with Nellie) Coming from Harlem to cook every day.

The Man I Love, Misterioso, Sweet 'n' Lovely, Monk's Dream — The best place to listen and brood is at home.

He longs to believe in the sweetness — but can't.