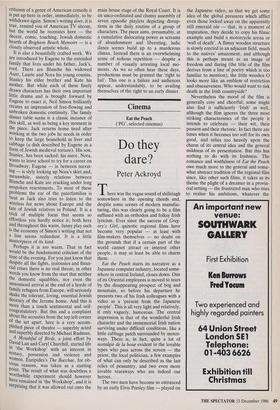 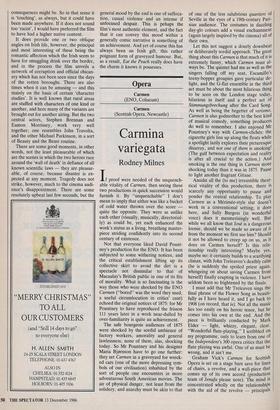 There was the vague sound of shillelagh somewhere in the opening chords and, despite some scenes of modern manufac- turing, this was clearly going to be a film suffused with an orthodox and folksy Irish lyricism. Ever since the success of Greg- ory's Girl, quixotic regional films have become very popular — at least with film-makers themselves — no doubt on the grounds that if a certain part of the world cannot attract or interest other people, it may at least be able to charm them.

Eat the Peach starts its narrative as a Japanese computer industry, located some- where in central Ireland, closes down. One of its Oriental employees is moved to tears by the disappearing prospect of bog and mountain, so before his departure he presents two of his Irish colleagues with a video as a 'present from the Japanese people'. This is all very light and relatively, if only vaguely, humorous. The central impression is that of the wonderful Irish character and the immemorial Irish nation surviving under difficult conditions, like a little cabbage patch surrounded by motor- ways. There is, in fact, quite a lot of nostalgie de la boue evident in the lovable types who pass across the screen — the priest, the local politician, a few examples of what can only be described as the last relics of peasantry, and two even more lovable tearaways who are indeed our heroes.

The two men have become so entranced by an early Elvis Presley film — played on the Japanese video, so that we get some idea of the global pressures which afflict even those locked away on the apparently still emerald isle — that, in a moment of inspiration, they decide to copy his filmic example and build a motorcycle arena or `wall of death'. A flimsy wooden structure is slowly erected in an adjacent field, much to the natives' amazement, and although this is perhaps meant as an image of freedom and daring (the title of the film derives from a line of poetry which is too familiar to mention), the little wooden 0 looks more like an emblem of restriction and obsessiveness. Who would want to risk death in the Irish countryside?

Nevertheless the mood of the film is generally cosy and cheerful; some might also find it sufficiently 'Irish' as well, although the film ignores the three most striking characteristics of the people it intends to celebrate — their wit, their passion and their rhetoric. In fact there are times when it becomes too soft for its own good, and relies too heavily upon the charm of its central idea and the general mildness of its presentation. But this has nothing to do with its Irishness. The romance and wistfulness of Eat the Peach owe much more to the general and some- what abstract tradition of the regional film since, like other such films, it takes as its theme the plight of a dreamer in a provin- cial setting — the frustrated man who tries to realise his ambitions, whatever the consequences might be. So in that sense it is 'touching', as always, but it could have been made anywhere. If it does not sound too 'racist', I would have preferred the film to have had a higher native content.

It does provide one or two oblique angles on Irish life, however, the principal and most interesting of these being the romantic affection which the Irish seem to have for smuggling drink over the border, and in the process the film unveils a network of corruption and official chican- ery which has not been seen since the days of the rotten boroughs. There are also times when it can be amusing — and this mainly on the basis of certain `character studies'. It is well known that rural areas are stuffed with characters of one kind or another, and here many of the variants are brought out for another airing. But the two central actors, Stephen Brennan and Eamon Morrissey, work very well together; one resembles John Travolta, and the other Michael Parkinson, in a sort of Beauty and the Beast routine.

There are some good moments, in other words, not the least pleasurable of which are the scenes in which the two heroes race around the `wall of death' in defiance of all known scientific laws — they are pleasur- able, of course, because disaster is ex- pected at any moment. Tragedy does not strike, however, much to the cinema audi- ence's disappointment. There are some resolutely upbeat last few seconds, but the general mood by the end is one of suffoca- tion, casual violence and an intense if unfocused despair. This is pehaps the film's most authentic element, and the fact that it can convey this mood within a generally comic narrative is something of an achievement. And yet of course this has always been an Irish gift, this rather poignant form of graveyard humour. But, as a result, Eat the Peach really does have the charm it knows it possesses.