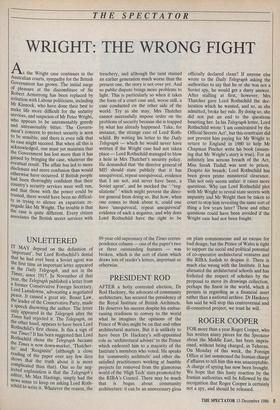 As the Wright case continues in the Australian courts, sympathy for the British Government has grown. The initial surge of pleasure at the discomfiture of Sir Robert Armstrong has been replaced by irritation with Labour politicians, including Mr Kinnock, who have done their best to make life more difficult for the security services, and suspicion of Mr Peter Wright, who appears to be unreasonably greedy and unreasonably bitter. The Govern- ment's concern to protect security is seen to be sensible; and there is even talk that its case might succeed. But when all this is acknowledged, one must yet maintain that the Government has lost more than it has gamed by bringing the case, whatever the eventual result. The affair has led to more disclosure and more confusion than would otherwise have occurred. If British people had been thoroughly confident that their country's security services were well run, and that those with the power could be trusted, there would have been no difficul- ty in trying to silence an expatriate re- negade like Mr Wright. The trouble is that the case is quite different. Every citizen associates the British secret services with treachery, and although the taint stained an earlier generation much worse than the present one, the story is not over yet. And so public- dispute brings more problems to light. This is particularly so when it takes the form of a court case and, worse still, a case conducted on the other side of the world. Try as she may, Mrs Thatcher cannot successfully impose order on the problems of security because she is trapped by what has already happened. Take, for instance, the strange case of Lord' Roth- schild. By writing his letter to the Daily Telegraph — which he would never have written if the Wright case had not taken place — Lord Rothschild managed to blow a hole in Mrs Thatcher's security policy. He demanded that 'the director general of MI5 should state publicly that it has unequivocal, repeat unequivocal, evidence that I am not, and never have been, a Soviet agent', and he mocked the ' "reg- ulations" ' which might prevent the direc- tor general from doing so. But how, when one comes to think about it, could one have 'unequivocal, repeat unequivocal' evidence of such a negative, and why does Lord Rothschild have the right to be officially declared clean? If anyone else wrote to the Daily Telegraph asking the authorities to say that he or she was not a Soviet spy, he would get a dusty answer. After stalling at first, however, Mrs Thatcher gave Lord Rothschild the dec- laration which he wanted, and so, as she admitted, broke her rule. By doing so, she did not put an end to the questions besetting her. In his Telegraph letter, Lord Rothschild wrote 'I am constrained by the Official Secrets Act', but this constraint did not prevent him paying for Mr Wright to return to England in 1980 to help Mr Chapman Pincher write his book (assum- ing that Mr Wright's story is true). For an infinitely less serious breach of the Act, Miss Sarah Tisdall was sent to prison. Despite his breach, Lord Rothschild has been given prime ministerial clearance. This not only seems unfair: it raises more questions. Why can Lord Rothschild plot with Mr Wright to reveal state secrets with impunity and Mr Wright then be taken to court to stop him revealing the same sort of thing a few years later? These and other questions could have been avoided if the Wright case had not been fought.