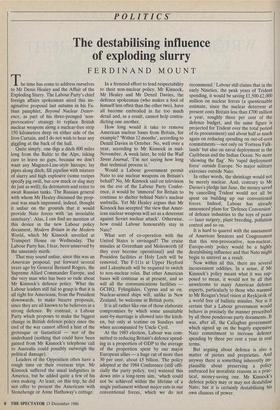 The destabilising influence of exploding slurry

The time has come to address ourselves to Mr Denis Healey and the Affair of the Exploding Slurry. The Labour Party's chief foreign affairs spokesman aired this im- aginative proposal last autumn in his Fa- bian pamphlet, Beyond Nuclear Deterr- ence, as part of his three-pronged 'non- provocative' strategy to replace British nuclear weapons along a nuclear-free strip 150 kilometres deep on either side of the Iron Curtain, and I do not wish to hear any giggling at the back of the hall.

Quite simply, one digs a ditch 800 miles long from the Baltic to the Alps, taking care to -leave no gaps, because we don't want any Maginot-Line-style hiccups; lay pipes along ditch; fill pipeline with mixture of slurry and high explosive (some recipes specify pig swill, but cow muck or slag may do just as well); fix detonators and retire to await Russian tanks. The Russian general with whom Mr Healey discussed the prop- osal was much impressed, indeed, thought it unfair on the grounds that it would provide Nato forces with 'an inviolable sanctuary'. Alas, I can find no mention of this device in the new Labour policy document, Modern Britain in the Modern World, which Mr Kinnock unveiled at Transport House on Wednesday. The Labour Party has, I fear, been unnerved by the unseemly mirth.

That may sound unfair, since this was an American proposal, put forward several years ago by General Bernard Rogers, the Supreme Allied Commander Europe, and the very man who has been so rude about Mr Kinnock's defence policy. What the Labour leaders still fail to grasp is that it is all right for Americans, from the President downwards, to make bizarre proposals, since they are all known to be believers in a strong defence. By contrast, a Labour Party which proposes to make the biggest change in British defence policy since the end of the war cannot afford a hint of the grotesque or fantastical — nor of the underhand (nothing that could have been gained from Mr Kinnock's telephone call to Australia could possibly outweigh the political damage).

Leaders of the Opposition often have a rough time on their overseas trips. Mr Kinnock suffered the usual indignities in America, but he added quite a few of his own making. At least, on this trip, he did not offer to present the Americans with Stonehenge or Anne Hathaway's cottage. In a frenzied effort to lend respectability to their non-nuclear policy, Mr Kinnock, Mr Healey and Mr Denzil Davies, the defence spokesman (who makes a fool of himself less often than the other two), have all become embroiled in far too much detail and, as a result, cannot help contra- dicting one another.

How long would it take to remove American nuclear bases from Britain, for example? `Within 12 months', according to Denzil Davies in October. No, well over a year, according to Mr Kinnock in mid- November. A week later, he told the Wall Street Journal, 'I'm not saying how long that technical process is.'

Would a Labour government permit Nato to use nuclear weapons on Britain's behalf? No, Mr Kinnock said on television on the eve of the Labour Party Confer- ence, it would be 'immoral' for Britain to continue to shelter behind Nato's nuclear umbrella. Yet Mr Healey argues that Mr Kinnock has accepted 'the view that Amer- ican nuclear weapons will act as a deterrent against Soviet nuclear attack'. Otherwise, how could Labour honourably stay in Nato?

What sort of co-operation with the United States is envisaged? The cruise missiles at Greenham and Molesworth (if they ever become operational) and the Poseidon facilities at Holy Loch will be removed. The F-111s at Upper Heyford and Lakenheath will be required to switch to non-nuclear roles. But other American bases will continue as at present, and so will all the communications facilities GCHQ, Fylingdales, Cyprus and so on. Nuclear-armed ships will, unlike in New Zealand, be welcome in British ports.

It is all rather like one of those elaborate compromises by which some unsuitable aunt-by-marriage is allowed into the kitch- en, but only at teatime on Sundays and when accompanied by Uncle Cyril.

At the 1983 election, Labour was com- mitted to reducing Britain's defence spend- ing as a proportion of GDP to the average of the proportion spent by our major European allies — a huge cut of more than 30 per cent, about £5 billion. The policy adopted at the 1984 Conference (still offi- cially the party policy, too) watered this down into a long-term aim, 'which could not be achieved within the lifetime of a single parliament without major cuts in our conventional forces, which we do not recommend.' Labour still claims that in the early Nineties, the peak years of Trident spending, it would be saving £1,500-£2,000 million on nuclear forces (a questionable estimate, since the nuclear deterrent at present costs Britain less than £700 million a year, roughly three per cent of the defence budget, and the same figure is projected for Trident over the total period of its procurement) and about half as much again on reducing spending on out-of-area commitments —not only on 'Fortress Falk- lands' but also on naval deployment in the Caribbean and the Indian Ocean. No more `showing the flag'. No 'rapid deployment force' outside Europe. No major military exercises outside Nato.

In other words, the shrinkage would not be merely nuclear. And, contrary to Mr Davies's pledge last June, the money saved by cancelling Trident would not all be spent on building up our • conventional forces. Indeed, Labour has already announced plans for 'Defence Conversion' of defence industries to the toys of peace — laser surgery, plant breeding, pollution control and so on.

It is hard to quarrel with the assessment of American Senators and Congressmen that this non-provocative, non-nuclear, Europe-only policy would be a highly destabilising influence and that Nato might begin to unravel as a result.

Now within all this, there are several inconvenient oddities. In a sense, if Mr Kinnock's policy meant what it was sup- posed to mean, it would not be all that unwelcome to many American defence experts, particularly to those who warmed to Mr Reagan's brief vision at Reykjavik of a world free of ballistic missiles. Nor is it certain that a Labour government would behave in precisely the manner prescribed by all those ponderous party documents. It was, after all, the Callaghan government which signed up on the hugely expensive Nato commitment to increase defence spending by three per cent a year in real terms.

But arguing about defence is also a matter of pieties and proprieties. And anyway there is something inherently im- plausible about preserving a policy embraced for moralistic reasons as a prac- tical, money-saving one. Mr Kinnock's defence policy may or may not destabilise Nato; but it is certainly destabilising his own chances of power.