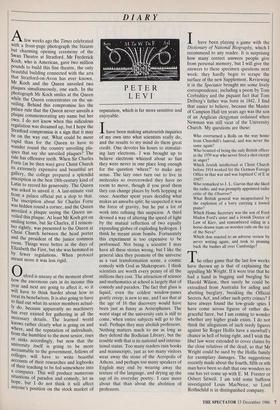 PETER LEVI with a front-page photograph the bizarre but charming opening ceremony of the Swan Theatre at Stratford. Mr Frederick Koch, who is American, gave two million pounds to build this fine theatre, the only beautiful building connected with the arts that Stratford-on-Avon has ever known. Mr Koch and the Queen unveiled two plaques simultaneously, one each. In the photograph Mr Koch smiles at the Queen while the Queen concentrates on the un- veiling. Behind this compromise lies the palace rule that the Queen never unveils a plaque commemorating any name but her own. I do not know when this ridiculous regulation was dreamed up, but I hope the Stratford compromise is a sign that it may be on the way out. What could be more vapid than for the Queen to have to wander round the country unveiling pla- ques that say she unveiled plaques? The rule has offensive teeth. When Sir Charles Forte (as he then was) gave Christ Church its extremely expensive and beautiful art gallery, the college prepared a splendid inscription in the best 18th-century kind of Latin to record his generosity. The Queen was asked to unveil it. A last-minute visit from a palace official put a stop to that. The inscription about Sir Charles Forte was hidden round a corner, and the Queen unveiled a plaque saying the Queen un- veiled this plaque. At least Mr Koch got on smiling terms, but Sir Charles, if I remem- ber rightly, was presented to the Queen at Christ Church between the head porter and the president of the junior common room. Things were better in the days of Elizabeth the First, but she was hemmed in by fewer regulations. When protocol meant more it was less rigid.

0 xford is uneasy at the moment about how the enormous cuts in its income this Year and next are going to affect it, so it will have to think harder about how to treat its benefactors. It is also going to have to find out what its senior members actual- ly do, because apparently no machinery has ever existed for gathering in all the necessary details. The learned world knows rather clearly what is going on and where, and the reputation of individuals, from the humblest to the most senior, rises orsinks accordingly, but now that the university itself is going to be more accountable to the government, fellows of colleges will have to write boastful accounts of their researches and logbooks of their teaching to be fed somewhere into a computer. This will produce numerous situations of paradox and comedy, let us hope, but I do not think it will affect anyone's position on the stock market of reputation, which is far more sensitive and enjoyable.

Ihave been making amateurish inquiries of my own into what scientists really do, and the results to my mind do them great credit. One devotes his hours to stimulat- ing lazy electrons. I was brought up to believe electrons whizzed about so fast they were never in one place long enough for the question `where?' to make any sense. The lazy ones turn out to live in molecules so overcrowded they have no room to move, though if you prod them they can change places by both hopping at once. Another spent years deciding what makes an amoeba split; he suspected it was the force of gravity, but he put a lot of work into refining this suspicion. A third devised a way of altering the speed of light by the mutual reflection of two equally expanding globes of exploding hydrogen. I think he meant atom bombs. Fortunately this experiment is too expensive to be performed. Not being a scientist I may have all these stories wrong, but I like the general idea they promote of the universe as a vast transformation scene, a cosmic comedy with God as Shakespeare. I think scientists are worth every penny of all the millions they cost. The attraction of science and mathematics at school is largely that of comedy and paradox. The fact that glass is liquid, even the coldest window-panes gently creep, is new to me, and I see that at the age of 16 this discovery would have been just as funny as Aristophanes. The worst stage of the university cuts is still to come, when entire subjects will go to the wall. Perhaps they may abolish professors. Nothing matters much to me as long as they defend the Bodleian Library, but the trouble with that is its national and interna- tional status. Too many readers ruin books and manuscripts, just as too many visitors wear away the stone of the Acropolis of Athens, and perhaps too many speakers of English may end by wearing away the texture of the language, and drying up the sap of its everyday poetry. I care more about that than about the abolition of professors. Ihave been playing a game with the Dictionary of National Biography, which I recommend to any reader. It is surprising how many correct answers people give from personal memory, but I will give the answers to these specimen questions next week: they hardly begin to scrape the surface of the new Supplement. Reviewing it in the Spectator brought me some lively correspondence, including a poem by Tom Corbishley and the piquant fact that Tom Driberg's father was born in 1842. I find that easier to believe, because the Master of Campion Hall ten years ago was the son of an Anglican clergyman ordained when Newman was still vicar of the University Church. My questions are these:

Who overturned a Rolls on the way home from Churchill's funeral, and was never the same again?

Who boasted of being the only British officer in the 1939 war who never fired a shot except in anger?

Which Jewish intellectual at Christ Church before 1914 worked for the German Foreign Office in that war and was baptised C of E in 1945?

Who remarked to J. L. Garvin that she liked the radio, and was promptly appointed radio critic of the Observer?

What British general was incapacitated by the explosion of a lorry carrying a looted piano?

Which Home Secretary was the son of Ford Madox Ford's sister and a Jewish Doctor of Law of Kiev, and remembered riding in a horse-drawn tram on wooden rails on the ice of the Neva?

Which don reacted to an adverse review by never writing again, and took to pruning back the bushes all over Cambridge?

The other game that the last few weeks have thrown up is that of explaining the appalling Mr Wright. If it were true that he had a hand in bugging and burgling Sir Harold Wilson, then surely he could be extradited from Australia for aiding and abetting burglary, breaking the Official Secrets Act, and other such petty crimes? I have always found the low-grade spies I have come across figures of rather dis- graceful farce, but I am coming to wonder whether any higher grade exists. I do not think the allegations of such seedy figures against Sir Roger Hollis have a snowball's chance in hell of being right, and I wish the libel law were extended to cover claims by the close relatives of the dead, so that Mr Wright could be sued by the Hollis family for exemplary damages. The suggestions recently made about the fourth, fifth or nth man have been so daft that one wonders no one has yet come up with E. M. Forster or Osbert Sitwell. I am told some buffoon investigated Louis MacNeice, so Lord Rothschild is in distinguished company.