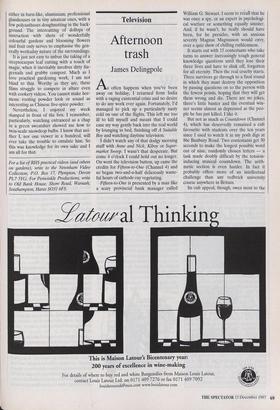 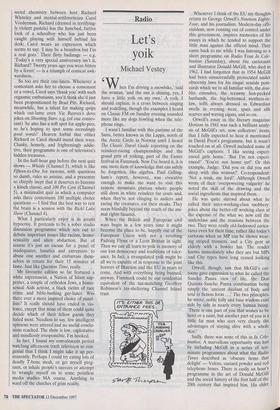 Aoften happens when you've been away on holiday, I returned from India with a raging existential crisis and no desire to do any work ever again. Fortunately, I'd managed to pick up a particularly nasty cold on one of the flights. This left me too ill to kill myself and meant that I could ease my way gently back into the real world by lounging in bed, finishing off A Suitable Boy and watching daytime television.

I didn't watch any of that dodgy morning stuff with Anne and Nick, Kilroy or Super- market Sweep. I wasn't that desperate. But come 4 o'clock I could hold out no longer. On went the television button, up came the credits for Fifteen-to-One (Channel 4) and so began two-and-a-half deliciously waste- ful hours of cathode-ray vegetating.

Fifteen-to-One is presented by a man like a scary provincial bank manager called William G. Stewart. I seem to recall that he was once a spy, or an expert in psychologi- cal warfare or something equally sinister. And, if he wasn't, he really should have been, for he presides, with an anxious severity Magnus Magnusson would envy, over a quiz show of chilling ruthlessness.

It starts out with 15 contestants who take turns to answer increasingly tough general knowledge questions until they lose their three lives and have to slink off, forgotten for all eternity. Then the real cruelty starts. Three survivors go through to a final round in which they must destroy the opposition by passing questions on to the person with the fewest points, hoping that they will get them wrong and die. There are no jokes, there's little banter and the eventual win- ner seems almost as depressed as the peo- ple he has just killed. I like it.

But not as much as Countdown (Channel 4), which has deservedly remained a cult favourite with students over the ten years since I used to watch it in my posh digs at 86c Banbury Road. Two contestants get 30 seconds to make the longest possible word out of nine, randomly chosen letters — a task made doubly difficult by the tension- inducing musical countdown. The arith- metic section is even harder. In fact it probably offers more of an intellectual challenge than any redbrick university course anywhere in Britain.

Its cult appeal, though, owes most to the weird chemistry between host Richard Whiteley and mental-arithmetician Carol Vorderman. Richard (dressed in terrifying- ly violent pastels) has the hunched, furtive look of a schoolboy who has just been caught playing with himself behind his desk; Carol wears an expression which seems to say: 'I may be a brainbox but I'm a real goer.' Their flirty badinage — e.g. `Today's a very special anniversary isn't it, Richard? Twenty years ago you were bitten by a ferret' — is a triumph of comical awk- wardness.

So too are their one-liners. Whenever a contestant asks her to choose a consonant or a vowel, Carol says 'thank you' with such orgasmic enthusiasm, you'd think she'd just been propositioned by Brad Pitt. Richard, meanwhile, has a talent for making quips which out-lame even Vic Reeves's dove jokes on Shooting Stars: e.g. (of one contes- tant) 'he also has a soft spot for apple-pies, so he's hoping to spot some exceedingly good words!' Heaven forbid that either Richard or Carol should mend their ways. Clunky, homely, and frighteningly addic- tive, their programme is one of television's hidden treasures.

In the half-hour gap before the next quiz shows — Whittle (Channel 5), which is like Fifteen-to-One for morons, with questions so dumb, rules so asinine, and a presenter so chirpily inept that it deserves to become a kitsch classic; and 100 Per Cent (Channel 5), a minimalist quiz in which a computer asks three contestants 100 multiple choice questions — I find that the best way to rest the brain is a session with the Ricki Lake Show (Channel 4).

What I particularly enjoy is its arrant hypocrisy. It pretends to be a sober studio discussion programme which sets out to debate important issues like racism, homo- sexuality and alien abduction. But of course it's just an excuse for a panel of inadequates, lunatics and extremists to abuse one another and embarrass them- selves in return for their 15 minutes of fame. Just like Question Time, really.

My favourite edition so far featured a white supremacist, a Nation of Islam sup- porter, a couple of orthodox Jews, a homo- sexual Aids activist, a black victim of race crime and bible-bashing gay-hater. Was there ever a more inspired choice of panel- lists? It really should have ended in vio- lence, except that none of them could quite decide which of their fellow guests they hated most. Needless to say, few intelligent opinions were uttered and no useful conclu- sions reached. The show is low, exploitative and mindlessly irresponsible. I'm hooked.

In fact, I found my convalescent period watching afternoon trash television so con- genial that I think I might take it up per- manently. Perhaps I could try eating lots of deadly T-bone steak, or get myself preg- nant, or inhale people's sneezes or attempt to wrangle myself on to some pointless media studies MA course. Anything to ward off the clutches of grim reality.