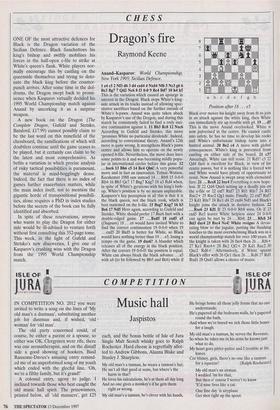 ONE OF the most attractive defences for Black is the Dragon variation of the Sicilian Defence. Black fianchettoes his king's bishop and swiftly mobilises his forces in the half-open c-file to strike at White's queen's flank. White players nor- mally encourage this by castling on the queenside themselves and trying to deto- nate the black king before the counter- punch arrives. After some time in the dol- drums, the Dragon swept back to promi- nence when Kasparov virtually decided his 1995 World Championship match against Anand by uncorking it as a surprise weapon.

A new book on the Dragon (The Complete Dragon, Gufeld and Stetsko, Batsford, £17.99) cannot possibly claim to be the last word on this minefield of the chessboard, the ramifications of which will doubtless continue until the game ceases to be played, but it certainly can claim to be the latest and most comprehensive. As befits a variation in which precise analysis of risky tactical possibilities is paramount, the material is mind-bogglingly dense. Indeed, the fact that there is no index of games further exacerbates matters, while the main index itself, not to mention the gigantic horde of transpositional possibili- ties, alone requires a PhD in index studies before the secrets of the book can be fully identified and absorbed.

In spite of these reservations, anyone who wants to play the Dragon for either side would be ill-advised to venture forth without first consulting this 352-page tome. This week, in the light of Gufeld and Stetsko's new discoveries, I give one of Kasparov's crushing wins with the Dragon from the 1995 World Championship match. Anand—Kasparov: World Championship, New York 1995; Sicilian Defence.

1 e4 c5 2 NO d6 3 d4 cxd4 4 Nxd4 Nt6 5 Nc3 g6 6 Be3 Bg7 7 Qd2 Nc6 8 0 0-0 9 Bc4 Bd7 10 h4 h5 This is the variation which caused an upsurge in interest in the Dragon. Black stops White's king- side attack in its tracks instead of allowing spec- ulative sacrifices based on the further onrush of White's h-pawn. Anand was quite taken aback by Kasparov's use of the Dragon, and during this match he consistently failed to find a truly inci- sive continuation against it. 11 Bb3 Re8 12 Nxc6 According to Gufeld and Stetsko, this move 'promises White no particular dividends'. Indeed, according to conventional theory, Anand's 12th move is quite wrong. It strengthens Black's pawn centre and allows him to operate on the newly opened b-file. Nevertheless, the move does have some points to it and was becoming mildly popu- lar in international circles before this game. 12 ...hxc6 13 Bh6 c5 14 Bc4 Qb6! A very powerful move and in fact an innovation. Tolnai—Watson, Kecskemet 1988 saw instead 14 ... Rb8 15 0-0-0 Rb4 16 Bb3 Qc7 17 Bxg7 ICxg7 18 a3 Rd4 when, in spite of White's gyrations with his king's bish- op, White's position is by no means unplayable. Kasparov's key perception in all this is that it is the black queen, not the black rook, which is best stationed on the b-file. 15 Bxg7 Kxg7 16 b3 Be6 17 Nd5 Here again, according to Gufeld and Stetsko, White should prefer 17 Bxe6 fxe6 with a double-edged game. 17 ... Bxd5 18 exd5 e5 (Diagram) 18 e6 would have invited White to find the correct continuation 19 0-0-0 when 19