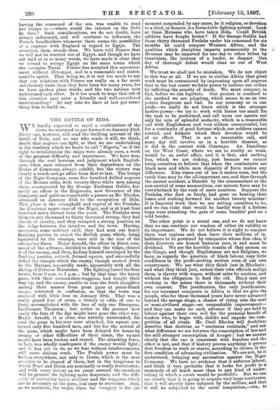 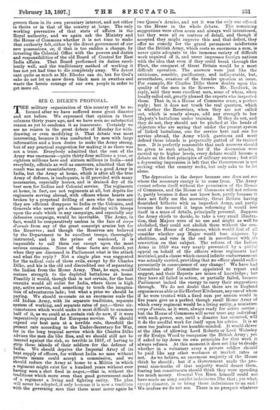 THE BATTLE OF BIDA.

WE hardly expected so rapid a confirmation of the views we ventured to put forward on January 23rd. Every one, however, will read the thrilling account of the battle of Bida, and no one who reads it will, we think, doubt that negroes can fight, or that we are undertaking in the territory which we begin to call "Nigeria," as if the right to revolutionise the maps were already ours, a work of the greatest difficulty and importance. We have won, through the cool heroism and judgment which English- men, when once released from their dependence on the House of Commons, always exhibit, but the victory was clearly a touch-and-go affair from first to last. The troops of the Niger Company, some five hundred drilled negroes of the Houssa tribe, with twenty-three white men among them, accompanied by Sir George Taubman Goldie, for- merly an officer in the Engineers, now Governor of the Company, and quite as remarkable a person as Mr. Rhodes, advanced. on January 25th to the occupation of Bida. This place is the stronghold and capital of the Foula.hs, he dominant negro race of the Niger, and is at least four hundred miles distant from the coast. The Foulahs were from twenty thousand to thirty thousand strong, they had clouds of cavalry, and they occupied a strong position on the ridge between the invaders and the town. Having, moreover, some military skill, they had sent out heavy flanking parties to attack the British guns, which, being , hampered by the swamps, were still in the rear of the advancing force. Major Arnold, the officer in direct com- mand of the advance, decided to attack the ridge, cleared , it of the enemy, and then, finding himself enveloped by the ' flanking parties, retired, formed square, and successfully defied the charges which the enemy, though mowed down by the Maxims, repeatedly made, apparently with all the daring of Zulus or Matabeles. The fighting lasted for four hours, from 9 a.m. to 1 p.m. ; but by that time the heavy guns, With their ammunition-waggons, had fought their way up, and the enemy, unable to bear the fresh slaughter among their masses from great guns at point-blank range, retreated in confusion, so that the town was stormed with little loss on January 29th. That was a really grand feat of arms, a victory at odds of one to forty, accomplished with the loss of only one European, Lieutenant Thomson ; but notice in the account how easily the fate of the day might have gone the other way. Major Arnold, it is clear, was entirely surrounded, for even the guns in his rear were attacked, his square con- tained only five hundred men, and but for the arrival of the guns, which might have been delayed for hours by swamp or• other difficulties of their route, the square might have been broken and erased. The attacking force, in fact, was wholly inadequate if the enemy would fight ; and it has yet to do, as we fear without reinforcements, still more serious work. The Foulah power must be broken everywhere, not only in norm, which is the next province to be cleared of them, but in the kingdoms to which Nup4 and fork are nominally or really feudatories ; and with every victory as we press onward the numbers will be greater, the fighting more desperate, and the diffi- culty of conveying heavy artillery and the waggons, which are as necessary as the guns, less easy to overcome. And, as we maintain, the negro, when kia -.vagery is for moment suspended, by any cause, be it religion, or devotion to a chief, or despair, is a formidable fighting animal. Look at these Houssas who have taken Bids. Could Britieh soldiers have fought better.? If Sir George Goldie had. those thirty thousand Foulahs under his command for six months he could conquer Western Africa, and the qualities which discipline imparts permanently to the Houssas may be imparted for one day to other tribes by fanaticism, the tyranny of a leader, or despair. One day of thorough defeat would clear us out of West Africa.

We trust we shall not be mistaken. We do not object to this war at all. If we are to civilise Africa that great work must be commenced by impressing upon all negroes that in the last resort we huve-power to enforce our orders by inflicting the penalty of death. We must conquer, in fact, before we can legislate. Our protest is confined to the method we are adopting, which seems to us on, two points dangerous and bad. In our economy or in our pride—we really do not know which is the stronger motive-power—we try to work with forces too small for the task to be performed, and call upon our agents not only for acts of splendid audacity, which is a reasonable call with Englishmen and very seldom unsuccessful, but for a continuity of good fortune which our soldiers cannot control, and without which their devotion would be of no effect. That is not a reasonable call, and some day will involve us in a horrible disaster, as it did in the contest with Cetewayo. An Isandlana on the West Coast, where we are in reality so weak, would be an awful affair, and it is that, and nothing less, which we are risking, just because we cannot bring ourselves to believe that when the combatants are black men and white men disparity of force makes any difference. Nine times out of ten it makes none, but the tenth time may be the all-important one, and then through the merest accident, a blunder by the commandant or the non-arrival of some ammunition, our minute force may be overwhelmed by the rush of mere numbers. Suppose the Foulahs, who died so freely, had gone on bearing their losses and rushing forward for another twenty minutes ! It is Imperial work that we are setting ourselves to do, and we run risks that would be hardly wise if a forlorn hope were attacking the gate of some bandits' peel on a wild border.

The other point is a moral one, and we do not know that we can convince our readers of either its validity or its importance. We do not believe it is right to conquer these vast regions and then leave their millions of in- habitants to be governed by companies whose first idea, if their directors are honest business men, is and must be dividend. We see the horrible results of that system on the Congo, and though Englishmen are not Belgians, we have, as regards the question of black labour, very little confidence in the profit-seeking section 'even of our own countrymen. We see what they think just in Rhodesia; and what they think just, unless their own officials malign them, is slavery with wages, without sales by auction, and without the obligation to feed the old. Black men are working in the mines there in thousands without their own consent. The justification, the only justification, for our incessant conquests in Africa is that we give the people, who for three thousand years have never advanced beyond the savage stage, a chance of rising into the next or semi-civilised stagei—an unspeakable improvement— and they can make no such advance if they are held to labour against their own will for the personal benefit of traders who' to begin with, dislike and impede the com- petition of all rivals. Mr. Cecil Rhodes will doubtless describe that doctrine as "unctuous rectitude," and ask what difference we see between the conscription of law and the still stronger conscription of hunger ; but we answer clearly that the one is consistent with freedom and the other is not, and that if history proves anything it proves that, freedom to work or starve, according to choice, Is the first condition of advancing civilisation. We are not, be it understood, bringing any accusation against the Niger Company. We have no evidence that it enforces labour, and think it very probable that it looks for profit to a monopoly of oil much more than to any kind of under- taking in which a cornee would be profitable. But we ca1 see clearly that it is going to acquire very large territories, that it will shortly have subjects by the million, and. that it will be subjected to the usual temptation,—vis., to govern them in its own pecuniary interest, and not either in theirs or in that of the country at large. The only working preventive of that state of affairs is the Royal authority, and we again ask the Ministry and the House Of Commons whether it is not time to make that authority felt, either by the direct government of our new possessions, or, if that is too sudden a change, by investing the Colonial Office with the powers and duties and responsibilities of the old Board of Control for East India affairs. That Board performed its duties excel- lently well, and the traditionary method of working it has not yet had time to die completely away. We detest cant quite as much as Mr. Rhodes can do, but for God's sake do not let us mow down black men in swathes and waste the heroic courage of our own people in order to get more oil.