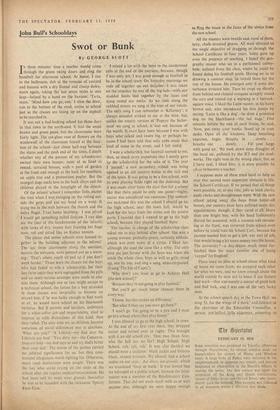 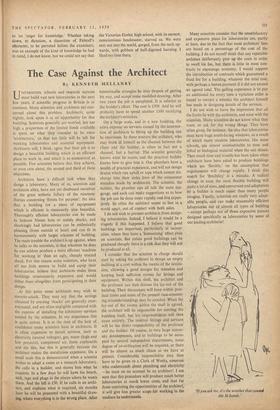 By GEORGE SCOTT through the green swing doors and ring the handbell for afternoon school. At home, l run to the bathroom, dab at the remains of custard and banana with a dry flannel and clomp doWn- stairs again, taking the last seven stairs in one leap—helped by a hand on the banister. Ta-ta, mum.' Mind how you go,-son.' 1 slam the door, run to the bottom of the road, arrive at school just as the classes are lining up on the asphalt to be marched in.

It was not a bad-looking school for those days in that town in the north-east. It had the usual brown and green paint, but the classrooms were fairly light. The cut-glass vase of flowers on the windowsill of the classroom hinted at the loca- tion of the school—just about half-way between the slums and the posh end of the town. I doubt whether any of the parents of my schoolmates owned their own houses; most of us lived -in rented, terraced houses, with a yard of garden at the front and enough at the back for ramblers, an apple tree and a pretentious poplar. But the mongrel dogs made love in the back alleys and the children played in the lamplight of the streets.

Of the infants' school I remember little, except the time when I was swinging on the railing out- side the gates and put my hand on a wasp. It stung me in the web between the thumb and the index finger. l run home blabbing: I was afraid I would get something called lockjaw. I can also see the face of the headmistress of the infants, with locks of dry, mousy hair framing her huge nose, red and pitted like an Italian tomato.

The junior and senior schools were housed to- gether in the building adjacent to the infants'. The last three classrooms along the corridor, nearest the entrance, were pointed out as a warn- ing: 'That's where you'll all end up if you don't work harder.' Those were the classes for the boys who had failed to win a scholarship; for their last three years they were segregated from the girls and- no more serious attempts were made to edu- cate them. Although one or two might escape to a technical school, the future for a boy stranded in these classes was invariably to become an errand boy, if he was lucky enough to find work at all, he would leave school on his fourteenth birthday. But if parents and teachers, ambitious for a white-collar job and respectability, tried to impress us with distinctions of this kind, then they tailed. The only time we, as children, became conscious of social differences was -at elections. 'What are you?' A Liberal—my dad says the Liberals are best,' You dirty oyt—the Conserva- tives are best—my dad says so and my dad's better than your dad.' The names of the parties carried no oolitical significance for us, but they com- manded allegiances worth fighting for. Otherwise, more cruel distinctions were sought. There was the boy who stood crying on the steps of the school after the regular medical'examination. He had been told he must wear glassek; thereafter he was to be hounded with the nickname `Speccy Four-Eyes.' cells at the end of the corridor, because, though I was only ten, I was good enough at football to be in the school team. On Saturday mornings we rode off together on our biCycles—I was taken on the crossbar by one of the big lads—with our studded Poots tied together by the laces and slung round our necks. As we rode along the cobbled streets we sang at the tops of our voices. The only song I can remember is 'Killarney'; it always sounded wicked to me at the time, but, unlike the smutty version of 'Popeye the Sailor- man' we sang at school, it*was not because of the words. It must have been because I was with boys who'talked and swore big, or perhaps be- cause I had been told that only yobs made that kind of noise in the street, and I felt sinful.

I won a scholarship, but football seemed to me, then, so much more important that I nearly gave up the scholarship for the sake of it. The year I 'passed,' a new secondary school was being opened in an old country house at ,the rich end of the town. It was going to be a fine school, with its own playing fields right on the doorstep. But it was made clear from the start that for a school like that there could be only one game—rugby; soccer was considered too common. The authori- ties reckoned this was the school I should go to; the high school, near the town hall, Would be kept for the boys from the slums and the poorer parts, I insisted that I wanted to go to the high school, because they played football there.

The teacher in charge of the scholarship class asked me to stay behind after school. She was a young woman, probably pretty, certainly athletic, which was even more of a virtue. I liked her, although she used the cane like a whip. The only time she Jost favour with the boys was when she made the whole class, boys as well as girls, stand uP, one by one, and sing a song, unaccompanied. (I sang 'The Isle of Capri.') 'Why don't you want to go to Acklam Hall [the new school)?'

'Because they're not going to play football.'

'But you'll get much better chances there in every way.'

'I know, but that makes no difference.'

'But what if they say you must go there?'

'I won't go. I'm going to be a pro and I must go to a school where they play footer:' 11 was allowed to go to the high school, in town. At the end of my first year there, they dropped soccer and turned over to rugby. This brought with it an old school cry : 'One, two, three, four, who the hell are we for? High School, High School, rah, rah, rah.' It was also decided we should wear a uniform : black jacket and hideous black, striped trousers. We already had a school motto on our caps : A ut disce, out discede, which we translated 'Swot or bunk.' It was hinted that we belonged to a public school, because the head- master was a member of the Headmasters' Con- ference. That did not wash much with us or with anyone _else, although we were happy enough N three minutes' time a teacher would- come I mixed a lot with the boys in the condemned to fling the boast in the faces of the sissies from the new school.

All the masters wore tweeds'and, most of them, tatty, chalk-streaked gowns. All were directed to the single objective of dragging us through the School Certificate in four years. Some gave up even the pretence of teaching. I hated'the geo- graphy master who sat in a partitioned cubby- hole, isolated from the class, where he could be found doing his football pools. Having set us to drawing a contour map, he 'retired there for the rest of the lesson. He emerged only if some dis- • turbance irritated him. Then he crept up silently from behind and clouted someone savagely round the ears and roared out a warning in a barrack- square voice. I liked the Latin master, in his hairy brown suit, who introduced his first lesson by saying, 'Latin is like a dog'—he drew a primitive dog on the blackboard—`the. tail wags.' Five minutes before the end of each lesson, he said, 'Now, put away your books. Stand up in your desks. Open all the windows. Deep, breathing exercises, begin. Breath,: in . . . slowly . . • breathe out . . slowly. . . . Fill your lungs with good air.' We took down deep draughts of the local air, polluted by the ICI and the steel- works. The right man in the wrong place, but, as I have said, I liked him; it is even possible he chose to become a teacher.

suppose most of them tried. hard to help us over that second most important obstacle in life, the School Certificate. If we passed that all things were possible, or, at any rate, jobs as bank clerks, audit clerks and draughtsmen were. With the new school taking away the boys from better-off homes, our masters must have suffered many dis- appointments, though, if they cared at all. More than one bright boy, with -his head fashionably Shaved for economy, with a coconut tuft remain- ing at the front, was removed from school even before he could take his School Cert., because his parents needed him to get a job, any sort of job, that would bring a bit more money into the house. The university?—a day-dream much more far- fetched than the more familiar one of being 'capped' for England.

There were no jibes at school about what kind of home we came from; we accepted each other for what we were, and we knew enough about the world outside by now not to boast if our fathers had work—that was merely a matter of good luck and bad luck, and I was one of the very lucky ones.

At the school speech day at the Town Hall, we sang '0, for the wings-of a' dove,' and listened to the chairman of the Educitibn. Committee, a spruce, pot-bellied little alderman, exhorting us to 'an 'unger for knowledge.' Whether taking down, at dictation, a dissection of Falstaff's character, to be parroted before the examiners, was an example of the kind of knowledge he had in mind, I do not know, but we could not say that the Victorian Gothic high school, with its earnest, conscientious headmaster, starved us. We were sent out into the world, gorged, from the neck up- wards, with gobbets of half-digested learning. I liked my time there.