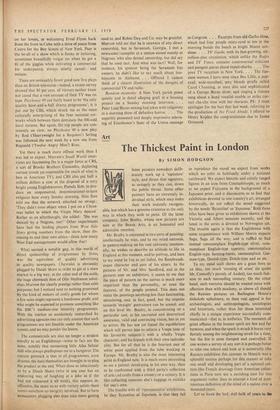 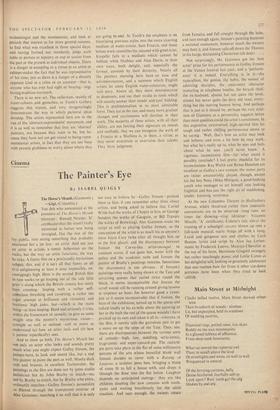 The Thickest Paint in London

Mr. Bratby is interested in two sorts of painting; intellectually he tries, and to my mind succeeds, in pattern-making on his vast canvases; emotion- ally, he wishes to describe an attitude to life in England at this moment, and to portray, and here to my mind he has as yet failed, the Rembrandt- esque character and guts of his sitters. In the pictures of Mr. and Mrs. Sandford, and in the pictures now on exhibition, it seems to me that the piece of pattern on the canvas is much more important than the personality, or even the features, of the people painted. This does not make the paintings anything less than fascinating, stimulating, and, in fact, good; but the impulse towards 'straight' portraiture can be sensed; and on this level Mr. Bratby, in concentrating on a particular and, in his encrusted and determined assurance, valid and convincing vision, has as yet to arrive. He has not yet found the equilibrium which will permit him to inform a Vespa (one of his favourite subjects!) with a wholly Vespa character, and his friends with their own individu- ality. But for all that he is the heaviest user of white paint applied from the tube working in Europe. Mr. Bratby is also the most interesting artist in England now. It is much more interesting to see a painter developing in his own way, than to be confronted with a third party's collection of arts isid crafts from a country or a century. It is like collecting someone else's baggage in mistake for one's own.

The trouble with all 'representative' exhibitions, be they Byzantine or Japanese, is that they fail to reproduce the mood we expect from works which we refer to habitually under a national catchword. We expect hieratic and calmly ranged figures in an icon from Constantinople, as much as we expect Fujiyama in the background of a Japanese print, and it disconcerts us to find that exhibitions devoted to one country's art, arranged historically, do not reflect the mood suggested by the words 'Byzantine' or 'Japanese.' Both these titles have been given to exhibitions shown at the Victoria and Albert museum recently, and the latest in the series is devoted to Norwegian art. The trouble again is that the Englishman with some acquaintance with William Morris expects Saga, Saga all the way, and is ruffled to find instead commonplace English-type silver, com- monplace English-type tapestry, commonplace English-type hunting-horns, commonplace Ger- man-type, Danish-type, Dutch-type and so on.

To my mind such shows are a great bore as an idea, too much 'massing of arses' (to quote Mr. Connolly's parody of Auden), too much fair- ness to each succeeding century. On the other hand, such ventures should be treated more with affection than with mockery, as above all should the Russian pictures on Burlington House's dishcloth upholstery, as their real appeal is for archmologists and anthropologists, sociologists and historians, rather than for those interested chiefly in a unique experience successfully com- municated—that is, in aesthetics. The moments of great afflatus in the human spirit are few and far between, and when the spark is struck it burns very fiercely among the neighbouring scrub for a time, but the fire is soon damped and controlled. If one wishes a survey of any sort it is perhaps better to take one school and look at it universally (the Rococo exhibition this summer in Munich was a splendid success perhaps for this reason) or take one small and developing part of a national cul- ture (the French drawings from American collec- tions in Paris now are a ravishing case for this argument) rather than to attempt a kind of port- imanteau definition of the mind of a nation over a thousand years.

Let us leave the bad, dull bulk of years to fibs ecclesiologist and the numismatist, and look at Periods that interest us for more general reasons, to find what was excellent in those special days; and having formed our standards, judge each table or picture or tapestry or cup or saucer from the past or the present as individual objects. There is a danger in accepting as a virtue in an artist or cabinet-maker the fact that he was representative of his time; just as there is a danger of a directly opposite kind in a critic or an amateur—that is, anyone who has ever had sight or hearing—neg- lecting tradition too much.

There is no new art. The collection, mainly of water-colours and gouaches, at Tooth's Gallery suggests this truism, and very invigoratingly demonstrates the way in which pictorial ideas develop. The artists represented here are in the van of the 'abstract-expressionist' movement, and it is as well to remember that they are 'abstract' painters, not because they want to be, but be- cause they have not yet got round to being repre- sentational artists, in fact that they are too busy with present problems to worry about where they are going to• end. At Tooth's the emphasis is on translating previous styles into the more exacting medium of water-colour. Sam Francis, and those whose work resembles his, succeed with great eclat, Riopelle fails in a medium which cannot be bullied, while Mathieu and Alan Davie, in their own ways, both delight, and, especially the former, astonish by their dexterity. Nearly all the painters showing here have an ease and adventurousness, and a sureness which English artists, let alone English water-colourists, might well envy. Above all, they show determination to dominate, and use their media as tools which will exactly answer their minds' and eyes' bidding. This is professionalism in its most admirable form. They are in the Van, and many more gradual changes and excitements will develop in their work. The majority of these artists, with all their ability, are not forcing their signature on moods and methods; that we can recognise the work of a Francis or a Mathieu is, in them, a virtue, as they never overstrain or overvalue their talents. They have judgment.