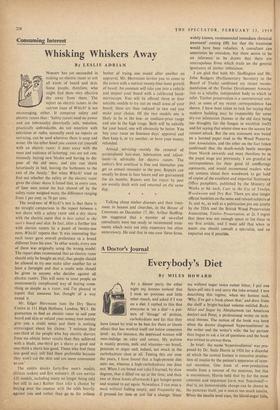 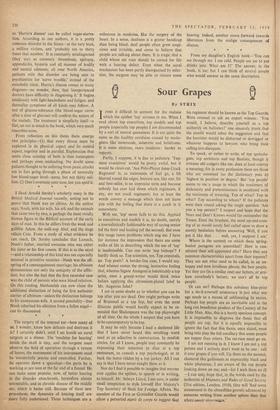 By MILES HOWARD AT a dinner party the other night my hostess noticed that I took no potatoes and little other starch, and asked if I was on a diet. I replied to this that everyone is 'on a diet'—a pat- tern of 'dosage' of protein, carbohydrate and fat that they have found by trial to be best for them or (more often) that has worked itself out below conscious level: as, for instance, the depressed woman will over-indulge on cake and sweets. My pattern is mainly protein, milk and vitamins—no bread, potatoes or sugar and, indeed, not much in the carbohydrate class at all. Testing this out over the years, I have found that a high-protein diet suits me, whereas a high-carbohydrate one does not. When I ate bread and cake I learned, by slow degrees, that it filled me up at the time, and then two or three hours afterwards I got hunger-pains and wanted to eat again. Nowadays, I can miss a meal without feeling empty, and frequently do, if pressed for time or just for a change. Since tea without sugar tastes rather bitter, I put one Saxin pill into it and carry the tube around. I was describing this regime, when my hostess said, `Why, I've got a book about that,' and drew from the shelf a bright-backed volume entitled Body, Mind and Sugar by Abrahamson (an American doctor) and Pezet, a professional writer on tech- nical themes. The notion of the book was born when the doctor diagnosed 'hyperinsulinism' in the writer and the writer's wife; the lay partner then began to ask a lot of questions and the book was written to answer them.

In brief : the name 'hyperinsulinism' was pro- posed by Dr. Seale Harris in 1924 for a disorder of which the central feature is excessive produc- tion of insulin by the patient's apparatus of inter- nal secretion. One form of over-production results from a tumour of the pancreas, but this is uncommon; Harris held that by far the most common and important form was 'functional'- thaf is, no demonstrable change can be shown in the pancreas itself, yet it makes too much insulin. When the insulin level rises, the blood-sugar falls, so 'Harris's disease' can be called sugar-starva- tion. According to our authors, it is a pretty common disOrder in the States—at the very least, a million victims, and 'probably ten to thirty times that number.' It is constantly misdiagnosed (they say) as coronary thrombosis, epilepsy, appendicitis, hysteria and all manner of bodily and mental ailments; all over North America, patients with this disorder are being sent to psychiatrists for 'nerve trouble,' instead of the metabolic clinic. Harris's disease comes in many disguises—no wonder, then, that 'inexperienced doctors have difficulty in diagnosing it.' It begins, insidiously with light-headedness and fatigue, and thereafter symptoms of all kinds may follow. A test of glucose-tolerance (the blood-sugar curve after a dose of glucose) will confirm the nature of the malady. The treatment is simplicity itself—a diet, set out in detail in the book, which very much resembles mine.

From reflection on this thesis there emerge two principles—(1) that every illness must be explored in its, physical aspect and its mental aspect, together and in parallel. Exploration that omits close scrutiny of both is thus incomplete and perhaps even misleading. No doubt some patients thought to be suffering from panic attacks are in fact going through a phase of unusually low blood-sugar level—some, but not thirty mil- lion. (2) Don't overstate your case, lest you spoil it.

I liked Arnold Sorsby's scholarly essay in the British Medical Journal recently, setting out to prove that Noah was an albino. As the author says, Noah, with his wife, his ark and the animals that came two by two, is perhaps the most vividly human figure in the Biblical account of the early days of man. In this he differs from the weak and gullible Adam, the milk-sop Abel, and the stage villain Cain. From a study of what evidence he can reach, Dr. Sorsby concludes that Lamech, Noah's father, married someone who was either his sister or his first cousin. If this is so (he says) —and a relationship of this kind was not especially unusual in primitive societies—Noah was the off- spring of a consanguineous marriage; his albinism demonstrates not only the antiquity of the afflic- tion, but also the fact that the first recorded case was the child of parents who were blood relatives. On this reading, Methuselah can now claim the additional distinction of being the first authentic carrier of albinism—unless the distinction belongs to his anonymous wife. A second possibility—that Noah inherited his albinism from a fallen angel— can be discounted.

The surgery of the internal ear—how many of us, I wonder, know how delicate and dextrous it is? I certainly didn't, until I sat beside an aural surgeon at a dinner. The 'machine for hearing' inside the skull is tiny, and the surgeon must observe the field of operation through a system of lenses; the movements of his instruments must be wonderfully precise and controlled. Further, he operates down a speculum—the parts he is working at are seen at the far end of a funnel. He can make some promise, now, of better hearing in the disorder otosclerosis, heretofore almost untreatable, and in chronic disease of the middle ear, which is better still. Because of these new procedures, the dynamics of hearing itself are more fully understood. These techniques are a milestone in medicine, like the surgery of the heart. In a sense, deafness is a graver handicap than being blind; deaf people often grow suspi- cious and irritable, and come to believe that people are talking about them. It is tragic that a child whose ear runs should be cursed for life with a hearing defect. Even when the aural mechanism has been partly disorganised by infec- tion, the surgeon may be able to restore some hearing. Indeed, another move forward towards liberation from the malign consequences of disease.

From my daughter's English book—'You can see through me. I am cold. People use me to put drinks into. What am I?' The answer, in the book, is ice; but I can think of several people who would answer to the same description.