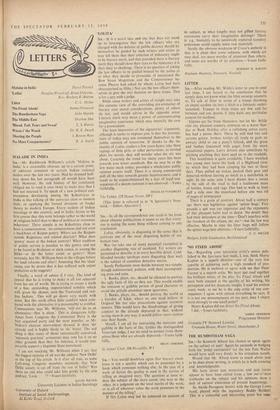 `No Fixed Abode' James Ormerod The Rumbotham Saga John Marlin The Middle East • Daphne Slee 'Blood, Toil, Tears and Sweat' L. S. Harris Worm i' the Wood Dr. H. E. Desch Meeting the People I. Bowen Rees No More Compartments? B. A. Smith MALAISE IN INDIA Rushbrook Williams's article 'Malaise in India' is a reasonable abstract, up to a certain point, of editorial comment in certain Indian national dailies over the last two years. Had he stopped half- way down his last paragraph all would have been well. However, the rich fantasy of his conclusion obliged me to read it over twice to make sure that I had not misread it. To speak of a new political con- sciousness developing among the Kshattriyas in India is like talking of the patrician class in modern Italy. or applying the formal divisions of feudal theory to modern Europe. Every student of Indian sociology in thiS country, and in India, learns in his first course that this term belongs rather to the world of religious belief than to that of political or economic behaviour. There simply is no Kshattriya class to have a consciousness: no consciousness and not even a backbone of Rajput gentry. Where are the Rajputs outside Rajputana and related districts? What does 'gentry' mean in the Indian context? What tradition of public service is peculiar to this gentry and not to be fOund in Brahman or clerk castes, or among the Sikhs—or do the latter count as gentry? More seriously, has Mr. Williams been in the villages before the land reforms and after? Assuming that his 'class' exists, can he prove that it has suffered such unjust spoliation as he suggests?

Finally, a word of advice if I may. The kind of appeal that he is trying to make is all too apparent from his use of words. He is trying to create is myth of a fine, upstanding, impoverished nobility which will, given the chance, save the 'frustrated and rest- less Indians.' This will go down very nicely with some. But this myth offers little comfort when com- pared with the alternative it is presumably to combat. Communism, says Mr. Williams. 'will not do as an alternative—that is plain.' This is dangerous folly. Apart from Congress the Communist Party is the best organised party and the most popular. as Mr. 'Nehru's election intervention showed. It does 'do' already and is highly likely to 'do' better. The sad thing is that many of those romantically conceived. 'intensely patriotic' aristocrats may vote for it on no other grounds than that,' for instance, it would tem- porarily support a linguistic State movement.

I am not mocking Mr. Williams when I say that the biggest surprise of all was the address 'New Delhi' at the top of his article. Is it after all true, as some Left-wing Congress membth-s maintain, that New Delhi society is cut off from the rest of India? Was there no one who could take him gently by the arm and say, 'Look . . .'?—Yours faithfully, DAVID POF(K7K