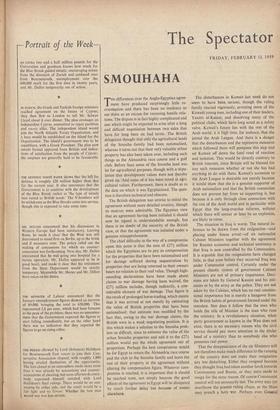 Portrait of the Week— AN EXTRA two and a half

million pounds for the Universities and goodness knows how much for the Blue Streak guided missile; encouraging noises from the direction of Zurich and confused ones from Bournemouth, unemployment over the 600,000 mark for the first time in twenty years, and Mr. Dulles temporarily out of action.

IN ZURICH. the Greek and Turkish foreign ministers reached agreement on the future of Cyprus; they then flew to London to tell Mr. Selwyn Lloyd about it over dinner. The plan envisages an independent Cyprus, committed to reject partition and enosis alike. The independent island would join the North Atlantic Treaty Organisation, and a base would be established on the island for the Organisation. The island's government was to be republican, with a Greek President. The plan now awaits formal approval from Britain and indica- tions of satisfaction from the people of Cyprus : the auspices are generally held to be favourable.

THE DEFENCE WHITE PAPER Shows that the bill for defence is roughly £20 million higher than that for the current year. It also announces that the Government is to continue with the development of the Blue Streak rocket as `the type of missile best suited to British needs.' The V-bombers will be withdrawn as the Blue Streaks come into service, though this is expected to take some time.

MR. DULLES announced that his discussions in Western Europe had been satisfactory. Leaving Bonn, he made it clear that the West was still determined to stand firm on Berlin, up to the brink and if necessary over. The policy ruled out the making of concessions for which no counter- concession was forthcoming. Next day, Mr. Dulles announced that he was going into hospital for a hernia operation. Mr. Dulles appeared to be in good heart, and made it clear that his retirement from the State Department would he strictly temporary. Meanwhile Mr. Herter and Mr. Dillon have taken on his duties.

THE MINISTER of Labour announced that the January unemployment figures showed an increase of 89,000, bringing the total to 620,000. This represented 2.8 per cent., which had been forecast as the peak of the problem; there was no announce- ment that the Government expected the figures to start falling immediately, but on the other hand there was no indication that they expected the figures to go on rising either.

THE PERIOD allowed by Lord (Solomon) Hailsham for Bournemouth East voters to join their Con- servative Association elapsed, with roughly 1,800 having availed themselves of the opportunity. The lists closed in an atmosphere made more tense than it was already by accusations and counter- accusations of cheating, but soon afterwards every- body expressed himself satisfied with Lord Hailsham's final rulings. There would be no can- vassing by either side, and the result would be a fair fight and no favour. Whether the best man would win was less certain.