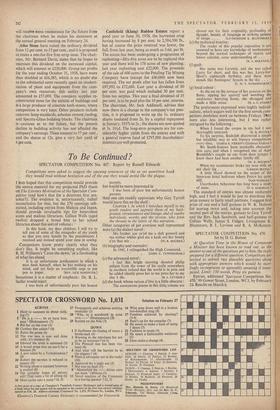 SPECTATOR COMPETITION No. 467: Report by Russell Edwards Competitors were asked to suggest the opening sentences of the as yet unwritten book they would read without hesitation and of the one they would avoid like the plague.

I HAD hoped that this competition would provide the source material for my projected PhD thesis on The Literary Motivation of the Spectator Com- petitor (and how's that for a deterrent first sen- tence?). The evidence is, unfortunately, rather inconclusive for that, but the 270 openings sub- mitted, including entries from Malaya and Japan, should provide invaluable tips for benevolent aunts and zealous librarians. Gillian Wells (aged twelve) dropped a broad hint to her school librarian about this sort of volume In this book, my dear children, I will try to tell you of some of the escapades of my youth so that you may benefit by the punishments I received and instead spend your time in sewing. Competitors know pretty clearly what they don't like. It might be something explicit, like

• R. H. Williams's 'Came the dawn,' or a foreboding of what lies ahead.

It is an unfortunate predicament in which a man finds himself, when he has nothing on his mind, and yet feels an irresistible urge to put

pen to paper. (REV. JACK SANDWITH.) Sometimes it is a matter of emphasis : Dr. R. L. Sadler would reject

I was born of unfortunately poor but honest

I was born of poor but unfortunately honest parents.

CHAPTER I. In which I introduce myself to my gentle readers and appraise them of my back- ground, circumstances and lineage, and of sundry individuals, worthy and the reverse, who form the threads in the fabric of this narration.

Other categories of pet aversion well represented were (a) the dialect novel : Ma feyther aye ca'ed me a daft gomeril and ma mither whiles gied me a keek oot her bonny e'en that wis . . . (W. K. HOLMES.)

(b) biography and memoirs

In 1941, I relinquished the High Command.

i feel this bright morning shouted philip oedipus from the tower of his castle somewhere in northern ireland that the world is in pain and he added silently press her to me press her to me else I die. (B. L. LEVISON.)

(d) the book whose raison d'etre is a little obscure : The anonymous poems in this little volume are chosen not for their originality, profundity of thought, beauty of language or striking aptness

(e) the technical treatise: The reader of this popular exposition is not assumed to have any knowledge of mathematics beyond the normal techniques of matrix and tensor calculus, some understanding of . . . (x. A. MCKENZIE.) (f) gush : Her name was Laramie, and she was called Larry for short, and this was her, Larry-for- Short's eighteenth birthday, and there were clouds like flamingoes' breasts in the sky . . . (c. W. V. WORDSWORTH.) (g) local colour : As she sat on the terrasse of her pension on the Butte, sipping her aperitif and watching the midinettes hurrying home, she shrugged and made a little moue. (H. A. C. EVANS.)

The preferences expressed were highly individ- ualistic, which augurs well for the first novels com- petitors doubtless work on between Fridays. TfieY were also less interesting, but I was rather intrigued by the following : When I found the corpse in my bed I was thoroughly annoyed. (K. R. POTTER.) To his surprise, Rudolph discovered a simple but infallible way to win literary competitions every time. (JAMES S. FIDGEN'S Guineas Galore.) We Smith-Joneses have markedly character- istic earsT and when I recognised one of Aunt Brunhilda's caught on our front door scraper I knew there had been another family tiff. (VV. K. HOLMES.) When my scoutmaster broke my nose with an old chair leg . . (LINDON IRVING.) A little blood showed on the carpet of the luxurious hotel bedroom where Poirot lay quite

still. (NAN WISHART.) Unorthodox behaviour has long been a study of mine. (P. G. KERSHAW.)

The standard of entries was almost uniformly high, and I feel it would be just to distribute the prize money in fairly small portions.( suggest first prize of one and a half guineas to W. K. Holmes for scoring twice and, taking into account the second part of the entries, guineas to Guy Tyrrell and the Rev. Jack Sandwith, and half-guineas to Gillian Wells, James S. Fidgen, Livingstone K. Bluntmore, B. L. Levison and R. A. McKenzie.