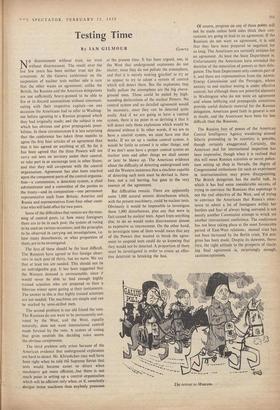 By IAN GILMOUR Geneva No disarmament without trust, no trust without disarmament. The result over ,the last few years has been neither trust nor dis- armament. At the Geneva conference on the suspension of nuclear tests neither side is sure that the other wants an agreement; unlike the British, the Russian and the American delegations are not sufficiently heavy-gunned to be able to fire or to discard ammunition without communi- cating with their respective capitals—on one occasion the Americans had to refer to Washing- ton before agreeing to a Russian proposal which they had originally made; and the subject is one which has obvious and great propaganda possi- bilities. In these circumstances it is less surprising that the conference has taken three months to agree the first four articles of an agreement than that it has agreed on anything at all. So far it has been agreed that the three Powers will not carry out tests on territory under their control, or take part in or encourage tests in other States; and that they will co-operate with the control organisation. Agreement has also been reached upon the component parts of the control organisa- tion—a commission, a detection system, a chief administrator and a committee of the parties to the treaty—and its composition—one permanent representative each from Britain, America and Russia and representatives from four other coun- tries who will hold office for two years.

Some of the difficulties that remain are the man- ning of control posts, i.e. how many foreigners there are to be in each post; the system of voting to be used on various occasions; and the principles to be observed in carrying out investigations, i.e. how many disturbances, or what proportion of them, are to be investigated.

The rust of these should be the least difficult. The Russians have agreed to five foreign obser- vers in each post of thirty, but no more. We say that at least ten are needed. This should not be an unbridgeable gap. It has been suggested that the Western demand is unreasonable, since it would never be able to find enough highly trained scientists who are prepared to face a Siberian winter spent gazing at their instruments. The answer to this is that highly trained scientists are not needed. The machines are simple and can be worked by semi-skilled men.

The second problem is our old friend the veto. The Russians do not want to be permanently out- voted by the West, and the West, equally naturally, does not want international control made farcical by the veto. A system of voting that gives neutrals the deciding voice seems the obvious compromise.

The third problem only arises because of the American evidence that underground explosions are hard to detect. Mr. Khrushchev may well have been right when he told the Supreme Soviet that tests would become easier to detect when machinery got more efficient,, but there is not much point in setting up a control organisation which will be efficient only when, or if, somebody designs better machines than anybody possesses at the present time. It has been argued, too, in the West that underground explosions do not Matter, since they do not pollute the atmosphere, and that it is merely making ,Mischief to try or to appear to try to adopt a system of control which will detect them. But the explosions that badly pollute the atmosphere are the big above- ground ones. These could be ended by high- sounding declarations of the nuclear Powers. No control system and no detailed agreement would be necessary, since they can be detected quite easily. And if we are going to have a control system, there is no point in so devising it that it will detect only those explosions which would be detected without it. In other words, if we are to, have a control system, we must have one that works. If we set up a useless control system, it would be futile to extend it to other things; and if we don't soon have a proper control system on nuclear tests and other things we shall sooner or later be blown up. The American evidence about the difficulty of detecting underground tests and the Western insistence that a machine capable of detecting such tests must be devised is, there- fore, not a red herring, but goes to the very essence of the agreement.

But difficulties remain. There are apparently some 1,000 natural seismic disturbances which, with the present machinery, could be nuclear tests. Obviously it would be impossible to investigate these 1,000 disturbances, plus any that were in fact caused by nuclear tests. Apart from anything else, to do so would make disarmament almost as expensive as rearmament. On the other hand, to investigate none of them would mean that any of the Powers that wanted to break the agree- ment to suspend tests could do so knowing that they would not be detected. A proportion of them must be investigated in order to create an effec- tive deterrent to breaking the ban. Of course, progress on any of these points will not be made unless both sides think their con- cessions are going to lead to an agreement. If the Russians do not want an agreement, it is odd that they have been prepared to negotiate for so long. The Americans are certainly anxious for an agreement. At least the State Department is. Unfortunately the Americans have extended the doctrine of the separation of powers to their dele- gation. The State Department only controls part of it, and there are representatives from the Atomic Energy Commission and the Pentagon, whose anxiety to end nuclear testing is under effective control; but although there are powerful elements in Washington who do not want an agreement and whose lobbying and propaganda sometimes provide useful dialectic material for the Russian delegation, American good faith in general is not in doubt, and the Americans have been far less difficult than the Russians.

The Russian fear of posses of the American Central Intelligence Agency wandering around Siberia pretending to be scientists is genuine, though certainly exaggerated. Certainly, the American zeal for international inspection has been impressive, though when it is realised that this will mean Russian scientists or secret police- men setting up shop in Nevada, the degree of Congressional enthusiasm for such an experiment in internationalism may prove disappointing. The British delegation has the useful task, in which it has had some considerable success, of trying to convince the Russians that espionage is not the real objective of the West, and of trying to convince the Americans that Russia's reluc- - tance to admit a lot of foreigners within her borders and fear of always being outvoted is not merely another Communist attempt to wreck yet another international conference. The conference has not been taking place at the most favourable period of East-West relations : mutual trust has not been increased by the Berlin crisis. Yet pro- gress has been made. Despite its slowness, there- fore, the right attitude to the prospects of reach- ing final agreement is, surprisingly enough, cautious optimism.

The retreat to Moscow.