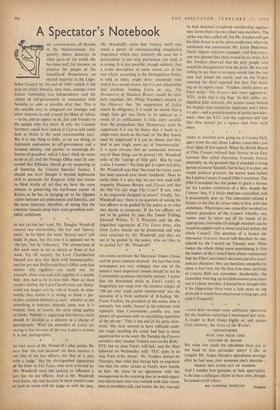 Page 8, 13 February 1959 — I HAVE BEEN OFFERED some additional specimens for the headline
Close

I HAVE BEEN OFFERED some additional specimens for the headline

collection I mentioned last week. A reader in Bath thinks highly of, and quotes from memory, the News of the World's

But what else could the sub-editor have put at the head of that particular story? I like to imagine Mr. Angus Maude's speculative musings after he had seen, over someone else's shoulder :

WRONG MAN JUMPS OUT OF WINDOW

And I wonder how genuine, or how apocryphal, is the one a colleague claims to have seen, though he cannot recall where :