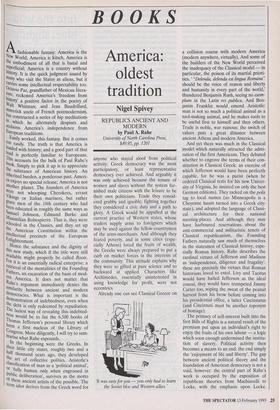 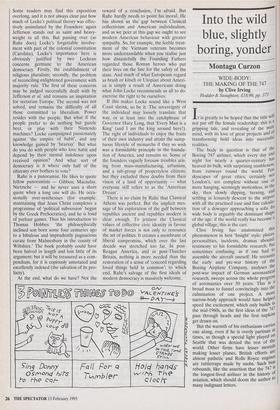 , fashionable fantasy: America is the

the World; America is kitsch, America is "1e embodiment of all that is banal and superficial; America is a country without history. It is the quick judgment issued by many who visit the States as aliens, but it carries some intellectual respectability too. Octavio Paz, grandfather of Mexican litera- ture, reckoned America's 'freedom from history' a positive factor in the poetry of Walt Whitman; and Jean Baudrillard, , rnaverick uncle of French postmodernism, !ls constructed a series of hip meditations ni which he alternately despises and acclaims America's independence from European traditions. , Easily worked, this fantasy. But it comes ,`°0 easily. The truth is that America is loaded with history; and a good part of that load is perfectly familiar to Europeans. This is accounts for the bulk of Paul Rahe's 'r▪ ook. Simply to pick it up is to appreciate the substance of American history. An inherited burden, a ponderous past. Ameri- ca enjoys no special release; America is not another planet. The founders of America were not whooping Cherokees, errant Vikings or Italian mariners, but rather !Wave men of the 18th century who had been educated in roughly the same ways as Samuel Johnson, Edmund Burke and Maximilian Robespierre. That is, they were schooled in the Classics, and they set up the American Constitution within the intellectual precincts of the European Enlightenment. Hence the substance and the dignity of this new study, which if the title were still available might properly be called Roots. For .it is an essentially radical enterprise: a retrieval of the mentalities of the Founding Fathers, an excavation of the basis of mod- ern America. It does not matter that Rahe's argument immediately denies the similarity between ancient and modern democracies. What is important is the demonstration of indebtedness, even when the debt is only redeemed by repudiation. The laziest way of revealing this indebted- ness would be to list the 6,500 books of Thomas Jefferson's personal library which form a first nucleus of the Library of Congress. More diligently, I will try to sum- marise what Rahe expounds. In the beginning were the Greeks. In their little city states, roughly two and a half thousand years ago, they developed the art of collective politics. Aristotle's classification of man as a 'political animal', or 'fully human only when engrossed in Public deliberation', survives as the motto of these ancient artists of the possible. The term idiot derives from the Greek word for

anyone who stayed aloof from political activity: Greek democracy was the most participatory, or least representative democracy ever achieved. And arguably it was only achieved because the tenure of women and slaves without the system fur- nished male citizens with the leisure to be their own politicians. Trade they consid- ered grubby and ignoble; fighting together they considered a civic duty and a path to glory. A Greek would be appalled at the current practice of Western states, whose traders supply arms to foreigners which may be used against the fellow-countrymen of the arms-merchants. And although they feared poverty, and in some cities (espe- cially Athens) loved the fruits of wealth, the Greeks were always prepared to put a curb on market forces in the interests of the community. This attitude explains why they were so gifted at pure science and so backward at applied. Characters like Archimedes, essentially uninterested in using knowledge for profit, were not eccentrics.

Already one can see Classical Greece on 'It was easy for you —you only had to learn the Soviet bloc and Western allies.' a collision course with modern America (modern anywhere, virtually). And some of the builders of the New World perceived the inadequacy of the Classical model — in particular, the poison of its martial priori- ties. "Delenda, delenda est lingua Romana" should be the voice of reason and liberty and humanity in every part of the world,' thundered Benjamin Rush, seeing no exem- plum in the Latin res publica. And Ben- jamin Franklin would emend Aristotle: man is not so much a political animal as a tool-making animal, and he makes tools to be useful first to himself and then others. Trade is noble, war ruinous: the switch of values puts a great distance between ancient Athens and modern America.

And yet there was much in the Classical model which naturally attracted the admi- ration of the first Americans. They debated whether to engrave the terms of their con- stitution in Classical Greek: an exercise of which Jefferson would have been perfectly capable, for he was a purist (when he ordered Classical texts for his new Univer- sity of Virginia, he insisted on only the best German editions). They tacked on the polls tag to local names (so Minneapolis is a Cheyenne haunt turned into a Greek city- state), and adopted the language of Classi- cal architecture for their national meeting-places. And although they may have harboured reservations about the anti-commercial and militaristic tenets of Classical republicanism, the Founding Fathers naturally saw much of themselves in the statesmen of Classical history, espe- cially Roman history. Rahe describes the cardinal virtues of Jefferson and Madison as 'independence, diligence and frugality': these are precisely the virtues that Roman historians loved to extol. Livy and Tacitus would have hailed Jefferson as the ideal consul, they would have trumpeted Jimmy Carter too, wiping the sweat of the peanut harvest from his brow before coming into his presidential office, a latter Cincinnatus (and Cincinnati must be another toponym of homage).

The primacy of self-interest built into the first Bills of Rights is a natural result of the premium put upon an individual's right to enjoy the fruits of his own labour — a logic which soon enough undermined the institu- tion of slavery. Political activity then becomes a means to an end: the end simply the 'enjoyment of life and liberty'. The gap between ancient political theory and the foundation of American democracy is not a void, however: the central part of Rahe's work is occupied by the exposition of republican theories from Machiavelli to Locke, with the emphasis upon Locke.

Some readers may find this exposition overlong, and it is not always clear just how much of Locke's political theory was effec- tively assimilated by the Founders: again Jefferson stands out as saint and heavy- weight in all this. But passing over (as Rahe does) Locke's forgettable involve- ment with part of the colonial constitution (Carolina), Locke's importance here is obviously justified by two Lockean concerns germane to the American democracy. Firstly, the establishment of religious pluralism; secondly, the problem of reconciling enlightened government with majority rule. The first of these concerns may be judged successfully dealt with by Jefferson et a4 and remains an inspiration for sectarian Europe. The second was not solved, and remains the difficulty of all those committed to liberalism. Power resides with the people. But what if the people prefer to do nothing but guzzle beer, or play with their Nintendo machines? Locke campaigned passionately against 'the empire of habit', and any knowledge gained by 'hearsay'. But what do you do with people who love habit and depend by their mental indolence upon received opinion? And what sort of democracy is it where only half of the citizenry ever bothers to vote?

Rahe is a panoramist. He likes to quote fellow panoramists — Gibbon, Macaulay, Nietzsche — and he never uses a short quote when a long one will do. He occa- sionally over-synthesises (for example, maintaining that Jesus Christ completes a programme of 'political subversion' begun by the Greek PreSocratics), and he is fond of parlour games. Thus his introduction to Thomas Hobbes: 'the philosophically inclined son born some four centuries ago to a bibulous and imprudently pugnacious curate from Malmesbury in the county of Wiltshire.' The book probably could have been halved in length and lost little of its argument; but it will be treasured as a com- pendium, for it is copiously annotated and excellently indexed (the salvation of its pro- lixity).

At the end, what do we have? Not the reward of a conclusion, I'm afraid. But Rahe hardly needs to point his moral. He has shown us the gap between Classical collectivism and American individualism, and as we peer at this gap we ought to see modern American behaviour with greater sympathy. So, for example, the feeble treat- ment of the Vietnam veterans becomes more understandable when you realise just how distastefully the Founding Fathers regarded those Roman heroes who put their lives on the line for the safety of the state. And much of what Europeans regard as brash or kitsch or Utopian about Ameri- ca is simply a result of Americans doing what John Locke recommends us all to do: exercise the right to be ourselves.

If this makes Locke sound like a West Coast shrink, so be it. The sovereignty of the individual may loosely translate that way, or at least into the catchphrase of Governor Huey Long, that 'Every Man is a King' (and I am the king around here!). The right of individuals to enjoy the fruits of their own industry and attain the sump- tuous lifestyle of monarchs if they so wish was a formidable principle in the founda- tion of America, and remains so. Some of the founders vaguely foresaw troubles aris- ing from mass-manufacturing, urbanism, and a sub-group of propertyless citizens: but they excluded these doubts from their vision of a land of opportunity — what everyone still refers to as the 'American Dream'.

There is no claim by Rahe that Classical Athens was perfect. But the implicit mes- sage of his exploration of the gulf between republics ancient and republics modern is clear enough. To jettison the Classical values of collective civic identity in favour of market forces is not only to renounce the art of politics. It creates a membrane of liberal compromise, which over the last decade was stretched too far. In post- Reagan America, and in post-Thatcher Britain, nothing is more needed than the restoration of a sense of 'concord regarding loved things held in common'; to which end, Rahe's salvage of the first ideals of modern democracy is massively welcome.