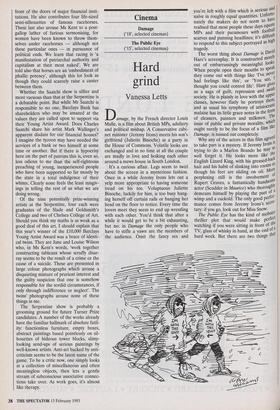 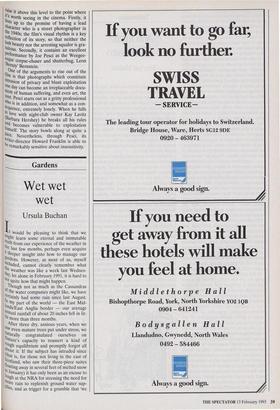 Damage, by the French director Louis Malle, is a film about British MPs, adultery and political mishap. A Conservative cabi- net minister (Jeremy Irons) meets his son's girlfriend (Juliette Binoche) at a party in the House of Commons. Volatile looks are exchanged and in no time at all the couple are madly in love and hoiking each other around a mews house in South London.

It's a curious affair. Legs seem to twirl about the screen in a mysterious fashion. Once in a while Jeremy Irons lets out a yelp more appropriate to having someone tread on his toe. Voluptuous Juliette Binoche, luckily for him, is too busy hang- ing herself off curtain rails or banging her head on the floor to notice. Every time the lovers meet they seem to end up wrestling with each other. You'd think that after a while it would get to be a bit exhausting, but no: in Damage the only people who have to stifle a yawn are the members of the audience. Omit the fancy sex and you're left with a film which is serious and naïve in roughly equal quantities. Unfortu- nately the makers do not seem to have realised that most people these days equate MPs and their paramours with football scarves and punning headlines; it's difficult to respond to this subject portrayed as high tragedy. The worst thing about Damao is David Hare's screenplay. It is constructed mostly out of embarrassingly meaningful Wks,: When people open their mouths to speak they come out with things like 'I've never had feelings like this', or 'You see, , thought you could control life'. Hare gives us a saga of guilt, repression and gosh society. He is plainly in love with the upper classes, however flatly he portrays then!, and as usual his symphony of aristocratic malaise has its little grace notes in the WI of cleaners, painters and milkmen. The of public and private morality, which ought surely to be the focus of a film !Ike Damage, is missed out completely. Why any of the actors in this film agreed to take part is a mystery. If Jeremy Irons is trying to do a Marlon Brando he may as well forget it. He looks more like thf. English Lizard King, with his greased-back hair and his habit of slinking into rooms es though his feet are sliding on oil. More perplexing still is the involvement 0 Rupert Graves, a fantastically handsome actor (Scudder in Maurice) who thoroughlY demeans himself by playing the part of a wimp and a cuckold. The only good pecf°r- mance conies from Jeremy Irons's safe. tary: if you go, look out for Miss Snow. The Public Eye has the kind of mobster thriller plot that would make perfect watching if you were sitting in front of the TV, glass of whisky in hand, at the end of 3 hard week. But there are two things that raise it above this level to the point where s worth seeing in the cinema. Firstly, it lives op to the promise of having a lead character who is a street photographer in the 1940s; the film's visual rhythm is a key reflection of its story, so that neither the lush beauty nor the arresting squalor is gra- tuitous. Secondly, it contains an excellent Performance by Joe Pesci as the Weegee- esque corpse-chaser and shutterbug, Leon Bern Bernstein. One of the arguments to rise out of the !lint is that photographs which constitute Intrusion of privacy and blunt exploitation lie day can become an irreplaceable docu- ment of human suffering, and even art, the next. Pesci starts out as a gritty professional Who is in addition, and somewhat as a con- se. quence, extremely lonely. When he falls In love with night-club owner Kay Lavitz (Barbara Hershey) he breaks all his rules ba!Icl becomes vulnerable to exploitation '11111self. The story bowls along at quite a Pace. Nevertheless, through Pesci, its Writer-director Howard Franklin is able to he remarkably sensitive about insensitivity.