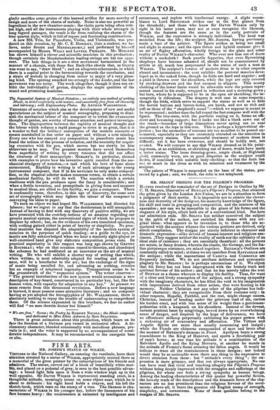 HAVING received the remainder of the set of Designs in Outline by Mr C. H. SELOUS, illustrative of BUNYA_N'S Pilgrim's Progress, that obtained the prize given by the London Art-Union, we are in a situation to form a judgment of their merits. It is impossible not to admire the clever- ness and dexterity of the designer, his masterly knowledge of the figure, his skill and taste in grouping and composition, and the neatness of his execution ; nor can we be insensible to the grace of his forms and the elegance of his style, albeit both are of a conventional kind. But here our admiration ends. Mr. SELOUS has neither conceived the subject in the spirit of the author, nor enriched his theme with any ori- ginal ideas : what appears to be invention is, to those who are ac- quainted with the sources whence the various portions are derived, only adroit compilation. The designs are utterly deficient in character and dramatic expression—alike devoid of human interest and religious sen- timent. ;They suggest neither the reality of earth nor the sublimity of an ideal state of existence ; they are essentially theatrical : all the persons are actors, in fancy dresses, wherein the classic, the German, and the Ita- lian picturesque costumes, are mixed together. RETZSCH s Outlines are constantly called to mind; at times we see snatches from RAFFAELLE and the antique ; while the mannerisms of Caleove and Coanonen are frequently imitated. We do not attribute deliberate and systematic plagiary to Mr. SELOUS; he is perhaps unconscious of it. We object that his fancy has not been impregnated with the homely truth and spiritual fervour of his author ; and that he has merely taken the text of BUNYAN as a theme whereon to display his facility. Thus, for want of a clear and lively conception of the subject, and a strong sympathy with the imaginary characters, he has filled the void in his imagination with impressions derived from other artists, that were floating in his memory. Neither Christian nor any other of the pilgrims has indi- vidual character: they are recognizable from their costume only : in other respects, Hopeful, Faithful, and the rest, might change names. Christian, instead of bending under the grievous load of sin, carries his burden erect, and with less sense of its weight than a gentleman- pedestrian with a knapsack on his shoulders. Instead of the devout, earnest penitent beset by misgivings, bowed down by an overwhelming sense of danger, and inspired by the hope of deliverance, we have an effeminate milksop perpetually exhibiting his proper person with a sickening air of coxcombry and affectation. The Virtues and Angelic Spirits are more than usually unmeaning and ; while the Fiends are chimeras compounded of man and brute after the manner of RETZSCH'S daemons in Faust. Apollyon bears a strong resemblance to the King of Hanover, and sports a flourishing pair of ram's horns ; at one time his attitude is a combination of the Belvidere Apollo and the flying Mercury, at another he stands in the attitude of FUSELI'S Satan arousing the fallen angels. It would be tedious to trace all the reminiscences in these designs; nor indeed would they be so noticeable were there any thing in the expression to divert attention from them : but " attitude's every thing "; the ex- pression is mere grimace, and that not always appropriate. No one can have read that vivid and touching allegory the Pilgrim's Progress without being deeply impressed with the struggles and sufferings of the pilgrims, for whom one feels a strong sympathy as human beings. Among the leading characteristics of this quaint but powerful fiction, the homely truth of the descriptions and the dramatic force of the cha- racters are no less prominent than the religious fervour of the senti- ments: above all, it bears the genuine old English stamp of strength, simplicity, and earnestness. None of these qualities belong to the designs of Mr. SELOUS.