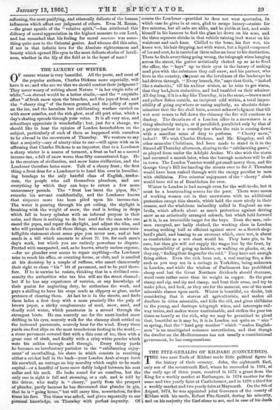 THE LUXURY OF WINTER.

Winter in London is bad. enough even for the well-to-do, but it must be a heartrending season for the poor. There were scores of working women out in that snowstorm with no additional protection except thin shawls, which held the snow nicely in their creases, and the whalebone imbecility called in England an um- brella, which affords about as much protection against driving snow as an artistically arranged cobweb, but which held forward es it is, is an irresistible target for the boys. Even the men, cab- men excepted, are badly clothed, the working class in London wearing nothing half as efficient against snow as a Scotch shep- herd's plaid, and leaning to an overcoat which, once wet, is about as comfortable as a wet sheet would be. They have gin, to be sure, but then gin will not supply the wages lost by the frost, by the impossibility of going up ladders, or walking on planks, or, as they say," findingtheir fingers for the cold." They have not enough firing either. Even the rich have not, a real roaring fire, a fire such as you may see in a cottage in Yorkshire, being unknown in London, and while the wisdom of Parliament has prohibited cheap coal lest the Great Northern dividends should decrease, wood costs rather more than its weight in copper. So the poor stamp and sip, and sip and stamp, and beat their arms, and try to make jokes, and look, as they are for the moment, one of the most miserable classes upon earth. Winter is beautiful, no doubt, but considering that it starves all agriculturists, and makes all dwellers in cities miserable, and kills the old, and gives chilblains to the young, and destroys telegraph wires, and interrupts rail- way trains, and makes water unattainable, and strikes the poor ten times as heavily as the rich, why we may be permitted to plead that, beautiful as it may be, it is in London not quite so " nice" as spring, that the " hard grey weather " which " makes English- men" is an unmitigated nuisance nevertheless, and that though the dweller on the Mediterranean has not usually a constitutional government, he has compensations.