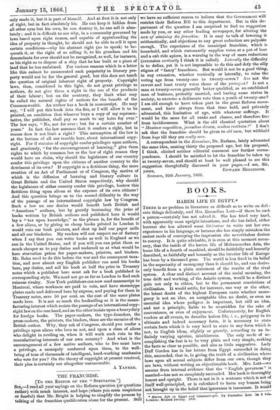 Sist,—I read all your sayings on the Reform question (or questions rather) with mach interest, and hope (where poi' seem suspicious or fearful) that Mr. Bright is helping to simplify the process by talking of the franchise qualification alone for the present. Still

we have no sufficient reason to believe that the Government will restrict their Reform Bill to this department. But in this de- partment of the question I am surprised to find no suggestion made by you, or any other leadiug newspaper, for altering the AGE of attaining the franchise. It is easy to talk of lowering it arithmetically, and objections to any great reduction are palpable enough. The experience of the municipal franchise, which is household, and which customarily supplies votes at a pot of beer and a cab ride apiece, is a warning in the way of mere reductions (extension vertically I think it is called). Laterally the difficulty is to define, yet it is not impossible to do this and defy the silly stigma of "fancy" franchises. But would it not be a good thing, in any extension, whether vertically or laterally, to raise the voting age from twenty-one to twenty-seven ? Are not the rawest and least trusty votes those of the youngest? Is not a man at twenty-seven generally better qualified, as an established man of business, probably married, and having some status in society, to exercise a deliberate vote than a youth of twenty-one? I am old enough to have taken part in the great Reform move- ment, and have always from that time held, and privately advocated, this limitation of age, with whatever suffrage. It would be the same for all ranks and classes, and therefore free from invidiousness. What is the old classical quotation about "Maxima respublicR, juvenibus dirutai, senibus restitutse?" I don't ask that the franchise should be given to old men, but withheld from boys till they are really men.

A correspondent in the Examiner, Dr. Barham, lately advocated the same idea, matting thirty the proposed age, but his proposal, I think, elicited neither editorial comment nor further corres- pondence. I should be satisfied to let the franchise be taken up at twenty-seven, and should at least be well pleased to see this suggestion thoughtfully discussed in your pages.—I am, Sir,