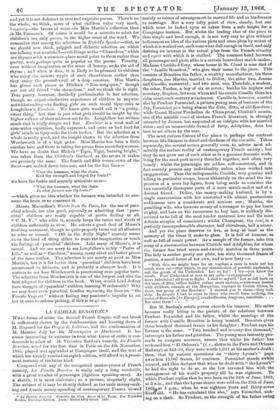 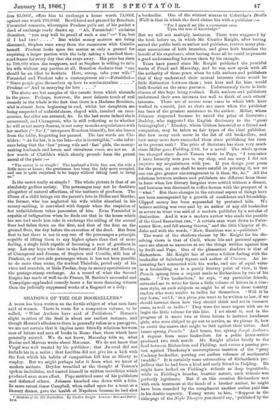 LA FAVTLLE BENOITON.* WHAT forms of satire the Second French

Empire will not brook is sufficiently shown by the condemnation and hunting down of M. Rogeard for the Propos de Labilnas, and the condemnation of M. Maurice Joly for his Montesquieu et Machiavel. It be- comes interesting to examine in turn what forms of satire it con- descends to allow of. M. Victorien Sardou's comedy, La Famine J3euoiton, acted for the first time in Paris on the 4th November, 1865, played and applauded at Compiegne itself, and the text of which has already reached its eighth edition, will afford us a promi- nent instance of the latter kind.

Compared with any of the recognized master-pieces of French comedy, La Famine Benoiton is really only a long vaudeville, with a great number of personages (eighteen speaking ones). As a. sketch, it is most elaborate ; as a picture, singularly slight. The subject of it may be shortly defined as the male money-mak- ing and female money-spending of contemporary France, viewed • La Famine Benolora. Coraddie en Cing Antes et Prose. Per Viotti-del Barden. Huaibute Edition. Paris : Ldry frdeets. lass. mainly as causes of estrangement in married life and as hindrances to marriage. Not a very lofty point of view, clearly, but one

which must be looked upon as taken from a safe height for a Compiegne horizon. But whilst the leading idea of the piece is thus simple and level enough, it is not very easy to give without tediousness an idea of the various plots and cross-plots by means of which it is worked out, each somewhat dull enough in itself, and only deriving its interest in the actual play from the French vivacity and esprit with which it is clothed. The common bond between all personages and plots alike is a certain benevolent match-maker, Madame Clotilde d'Evry, whose house at St. Cloud is near that of the "famine Benoiton," who give their name to the piece. This consists of Benoiton the father, a wealthy manufacturer, his three daughters, one Marthe, married to Didier, the other two, Jeanne and Camille, unmarried ; and two sons, one, Theodule, a student, the other, Fanfan, a boy of six or seven ; besides his nephew and secretary, Stephen, between whom and his cousin Camille there is a calm nineteenth-century attachment. Camille is, however, courted

one of the amiable roués of modern French literature, is strongly attracted by Jeanne, but suspected of an intrigue with her married sister ; and an unmarriable damsel of forty, Adolphine, does her best to set others by the ears.

The most curious feature of the pies e is perhaps the contrast between life-likeness in detail and deadness of the ensemble. Taken separately, the several scenes generally seem to mirror most ad- mirably the surface reality of contemporary French society ; but they do not grow out of each other as in a genuine dramatic work, being for the most part merely threaded together, and often very loosely ; whilst the personages are seldom self-consistent, and in fact scarcely possess any individuality unless when worked into exaggeration. Thus the indispensable Clotilde, very genuine and telling in particular scenes, leaves ultimately on the mind the im- pression of a mere lay figure, from being made to combine the two essentially discrepant parts of a mere match-maker and of a devoted friend. Didier, the money-making husband, is by a single conversation with her converted with almost pantomimic suddenness into a considerate and anxious one ; Marthe, the gambling wife, who borrows money of a stranger to pay her losses at play, and bets on the racecourse to buy lace, is suddenly dis- covered to be full of the most tender maternal love and the most

delicate scruples of conscience ; whilst Champrose, the roue, is a

perfectly incomprehensible character, half chivalrous, half a ninny. And yet the piece deserves to live, as long at least as the memory of the times it seeks to glass. It is fall of humour, as well as full of comic power. As a sample of the former, take this scrap of a conversation between Clotilde and Adolphiue, for whom the former has tried seven-and-twenty matches in three years.

The lady is neither pretty nor plain, has sixty thousand francs of portion, a small house of her own, and is now forty :-

" With this, we might hope for an employ; a man in trade not too much worn out—that which, in my classification of possible husbands, I call the group of the Undecided. Let us try ! I try—you know the result. Four Undecided at once in my salon—you appeared . . . . No more indecision ! all took to flight. I said to myself, Let us fall back on the men of fifty,, rather balder, rather more mature,—widowers loaded with children, consuls at the Marquesas, employes in Cochin China, in short, the group of the Resolute.' I showed you to them—they took ship. In despair I had to come to those who recoil from nothing, the series of Dare-ails [les Enrages], crackodbrains, dragoons, cannibals. . . .

But M. Sardon's satiric power exceeds his humour. His satire becomes really biting in the picture of the relations between Prudent Formichel and his father, whilst the marriage of the former with Camille Benoiton is being treated. Benoiton gives three hundred thousand francs to his daughter ; Prudent says his fortune is the same. "Two hundred and seventy-five thousand," interrupts his father and guardian. The young man instantly pro- ceeds to compare accounts, asserts that whilst his father has reckoned him " 25 Orleans's " (i. e., shares in the Paris and Orleans Railway) at 842-50, they were worth 1,041 at his mother's death ; then, that by various operations on " thirty Lyons's " papa owes him 12,087 francs, 50 centimes. Formichel stands awhile amazed, and then declares that when he dealt with " the Lyons's" he had the right to do so, as the law invested him with the

management of his ward's property till he was eighteen. To which Prudent replies that he was born on the 24th of June, 1842, at 3 a.m., and that the Lyons shares were sold on the 25th of June, 1864 at 4 p.m., when he was eighteen years and thirty-seven Ictintr old. " He has calculated this also," says Formichel, sink- ing on a chair. So Prudent, on the strength of his father owing

him 25,000f., offers him to exchange a house worth 75,000f. against one worth 100,000f. Bewildered and pressed by Benoiton, Formichel consents, whereupon Prudent pulls out of his pocket a deed of exchange ready drawn up. " Ah, Formichel I " exclaims Benoiton, " you may well be proud of such a son 1"—" Yea, but

if I had two I " But whilst money matters are being discussed, Stephen runs away from the racecourse with Camille herself. Prudent looks upon the matter as only a ground for requiring a larger portion with the lady, asking a hundred thou- sand francs for every day that she stays away. His price has risen to 700,000 when she reappears, and as Stephen is willing to take his wife without any portion at all, Benoiton declares that "one should be an idiot to hesitate. Here, scamp, take your wife !" Formichel and Prudent take a contemptuous air:—Formichel- " Since people give themselves up here to sentimentalism . . . ." Prudent —" And to marrying for love . . . ."

The above are but samples of the caustic force which abounds in the piece. Perhaps, however, the most delicate touch of real comedy in the whole is the fact that there is a Madame Benoiton, vhd is absent from beginning to end, whilst her daughters are being suspected of unfaithfulness, eloped with, insulted on race- courses, her elder son arrested, &e. In the last scene indeed she is announced, and Champroae, who is still reflecting as to whether he will or not marry Jeanne, is not sorry to make acquaintance with her mother ("Nor I," interposes Benoiton himself), but she leaves from the lobby, forgetting her parasol. The last words are Clo- tilde's: "As for her, it is too late—she is incorrigible,"—the infer- ence being that the fast' young wife and ' fast' girls, the money- making husbands and lovers and chivalrous roues, are not so. A few words of Clotilde's which shortly precede form the patent moral of the piece :—

" The secret is so simple ! The husband a little less out, the wife a little more at home; the gentleman less busy, the lady more occupied, and one is quite surprised to be happy without taking heed to being

Is the secret really so simple ? The whole picture is that of an Absolutely godless society. The personages may not be destitute altogether of natural affections, of the instincts of goodness. The illness of a child brings out the parent's love in Didier and Marthe; the former, who has neglected his wife whilst absorbed in his money-making, is convulsed with despair when the suspicion of her unfaithfulness takes possession of him. Even Formichel is capable of indignation when he finds out that in the house which his son had made him take in exchange the ceiling of the second Boor had fallen down on the first, and that of the first on the ground floor, the day before the execution of the deed. But from first to last there is not in any one of the personages a principle capable of lifting them to any higher sphere than that of mere feeling, a single faith capable of becoming a root of goodness in any. Let any hope who dare in the future of Didier and Marthe, of Champrose and Jeanne, of Stephen and Camille, still less of Prudent, or of two side personages whom it has not been possible to do more than name, the student Theodule, proud only of his vices and scandals, or little Fanfan, deep in money speculations on the postage-stamp exchange. As a record of what the Second Empire has made of well-to-do France, M. Sardou's successful and Compiegne-applauded comedy bears a far more damning witness than the judicially suppressed works of a Rogeard or a Joly.