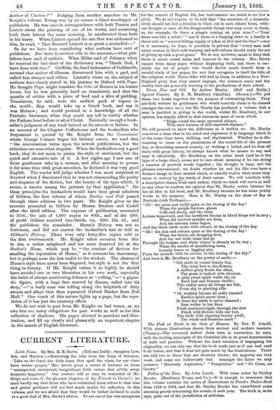 The Path on Earth to the Gate of Heaven. By

Rev. F. Arnold. With sixteen illustrations drawn from ancient and modern masters. (Warne.)—The reverend author deals here in succession, he says, with the leading principles of the Christian life in its great departments of faith and practice. Without the least intention of impugning his originality, we can only say that his book reads just as if one had read it all before, and that it does not gain much by the illustrations. There are only two or three that are decently drawn; the majority are very weak, and some are ludicrously bad. Amongst the latter we may instance "Heavenly Aspiration," "Temptation" and "No Cross, no Crown."