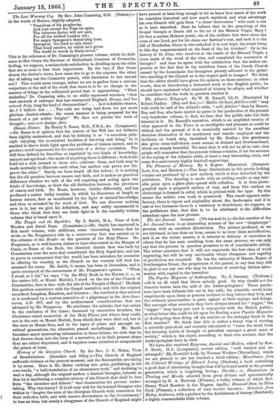 The Popular Magazine of Anthropology. No. I. January. (Triibner.) —It

is an ill wind that blows nobody good. So why should not the Jamaica breeze tarn the mill of the Anthropologists ? These gentle- men have been hitherto left out in the cold ; the scientific world looks suspiciously upon them as persons inclined to leap before they look, and the ordinary paterfamilias is quite aghast at their sayings and doings. But amongst other crotchets they have always abused the " nigger," the "nigger " they fancy just now is unpopular with the British public ; so what better hike could be hit upon for floating a new Popular Magazine of Anthropology than firing off six articles at the unhappy black in the first number? Wo think that this is rather a funny way of starting a scientific periodical, and scarcely calculated to " raise the mind from the debasing habits of thought so prevalent amongst a great mass of society," which is the object, according to their own account, that the Anthropologists have in view.