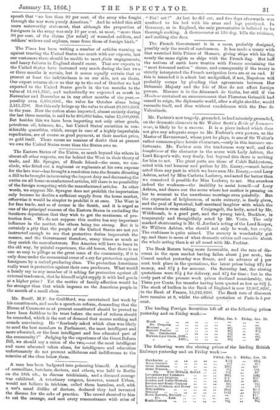 Mr. Bovill, M.P. for Guildford, was entertained last week by

his constituents, and made a speech on reform, demanding that the House of Commons as at present constituted should be proved to have been faithless to its trust before the need of reform should be conceded, which is the sort of demand that means nothing and sounds convincing. He "fearlessly asked which class was likely to send the best members to Parliament, the most intelligent and more educated, or the least intelligent and less educated part of the community ?" Judging by the experience of the Great Reform Bill, we should say a union of the two,—not the most intelligent and more educated taken alone, for intelligence and education unfortunately do not prevent selfishness and indifference to the miseries of the class below them.