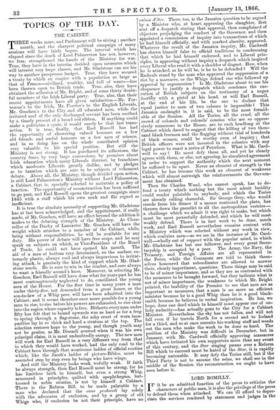 THREE weeks more, and Parliament will be sitting ; another month, and the sharpest political campaign of many sessions will have fairly begun. The interval which has elapsed since the death of Lord Palmerston has not, however, we fear, strengthened the hands of the Ministry for war. True, they have in the interim decided upon measures which will interest very large classes, and Mr. Gladstone can see his way to another prosperous budget. True, they have secured a treaty by which an empire with a population as large as that of France—civilized, wealthy, and full of wants—has been thrown open to British trade. True, also, they have obtained the adhesion of M.r. Bright, and of some thirty doubt- ful members of the Irish Liberal party. True, also, that their recent appointments have all given satisfaction—Mr. For- tescue's to the Irish, Mr. Forster's to the English Liberals, Mr. Goschen's to the City and all educated men, while the irritated soul of the only discharged servant has been soothed by a timely present of a broad red ribbon, If anything could make a politician a cynic, it would surely be that last trans- action. It is true, finally, that Earl Russell has had the opportunity of showering valued honours on a few old friends and useful honours on a few men of science, and in so doing has on the whole conciliated opinion very valuable to his special position. But still the Ministry is not strong. It has purchased its adhesions, the country fears, by very large concessions, by promises about Irish education which many Liberals distrust, by franchises which moderate Liberals greatly dislike, and by pledges as to taxation which are sure to be subjects of vehement debate. Above all, the Ministry, though decided upon action, is still Lord Palmerston's Ministry without Lord Palmerston, a Cabinet, that is, specially selected to maintain a policy of inaction. The opportunity of reconstruction has been suffered to go past, and Earl Russell opens the greatest campaign since 1845 with a staff which his own rank and file regard as inefficient.

It is true the absolute necessity of supporting Mr. Gladstone has at last been acknowledged, and the appointment, if really made, of Mr. Goschen, will have an effect beyond the addition it makes to the debating strength of the Ministry. As Chan- cellor of the Duchy of Lancaster Mr. Goschen will have the weight which attaches to a member of the Cabinet, while, being without responsibilities, he will be available for any duty. His power of debate will have free scope, and he may speak on subjects on which, as Vice-President of the Board of Trade, he could not have opened his mouth. The aid of a man at bottom very determined, on the surface ex- tremely plastic, always cool and always impervious to irritat- ing attack, is precisely the kind of support which Mr. Glad- stone needs. He is sure to win in the combat, and sure always to want a friendly second's knee. Moreover, in selecting Mr. Goschen, Earl Russell will have done what for years past he has most contemptuously neglected to do, conciliated the young men of the House. For the first time in many years a man under thirty-five, not descended from a great house, or the son-in-law of a Whig peer, will have been admitted into the Cabinet, and it seems therefore once more possible for a young man to rise, to rise before his powers are exhausted, to rise clear into the region where capacity is free. Hitherto everyman under fifty has felt that to bound upwards was as hard as for a frog to spring through a flag-stone, the ashy crust of worn inca- pacities lay in so thick and hard a stratum at the top. The selection restores hope to the young, and though youth may not be genius, as Mr. Disraeli averred when it was his own principal claim, it is most undoubtedly energy. The new men will work for Earl Russell in a very different way from that in which they would have worked, had the only road to the Cabinet been through that wearisome ladder of official routine which, like the Jacob's ladder of picture-Bibles, must be ascended step by step even by beings who have wings.

And still the Ministry looks weak, wofully weak. If faith

be always strength, then Earl Russell must be strong, for he has limitless faith in himself, but even a strong Whig, armoured in principles, quilted with apophthegms, but- tressed in noble cousins, is not by himself a Cabinet. There is the Reform Bill, to be made palatable by a man who declared that the onus probandi lay solely with the advocates of exclusion, and by a group of old Whigs who, if exclusion be not their principle, have no raison d'Are. There, too, is the Jamaica question to be argued by a Minister who, at heart approving the slaughter, first sent off a despatch stating that approval, then complained of objectors prejudging the conduct of the Governor, and then appointed a commission of inquiry into transactions of which he had himself officially, and with marked alacrity, approved. Whatever the result of the Jamaica inquiry, Mr. Cardwell has shown himself false to official traditions in condemning that which he had himself endorsed, and to Liberal prin- ciples, in approving without inquiry a despatch which inspired every Liberal who read it with a shudder of disgust. How, when he is attacked, as he will be, is he to be defended ? Will the Radicals stand by the man who approved the suppression of a riot by a massacre, or the Whigs defend one who followed up approval by supercession ? Is Mr. Gladstone about to use his eloquence to justify a despatch which condones the exe- cution of British subjects on the testimony of a negro foottroy with a pistol at his head, or will Earl Russell, at the end of his life, be the one to declare that equal justice to men of two colours is impossible ? This Jamaica onslaught is, it is said, to be the most formid- able of the Session. All the Tories, all the cruel, all the crowd of colonels and colonels' cousins who are so oppres- sively numerous in the House, are to rush headlong at the Cabinet which dared to suggest that the killing of two thou- sand black freemen and the flogging without trial of hundreds of black women, could be worthy even of inquiry ; that British officers were not invested in the colonies with any legal power to enact a series of Peterloos. What is Mr. Card- well to say ? He must defy them all, and yet he clearly agrees with them, or else, not agreeing, he simulated agreement in order to support the authority which the next moment he suffered to be upset. Never an element of strength in the Cabinet, he has become this week an element of weakness which will almost outweigh the reinforcements the Govern- ment has obtained.

Then Sir Charles Wood, who cannot speak, has to de- fend a treaty which nothing but the most adroit lucidity could render palatable to anybody, and which the Tories are already calling shameful. Sir George Grey, who would recede from his dinner if a mouse contested the plate, has thrown down the gauntlet to all the metropolitan vestries— a challenge which we admit it was right to make, but which must be most powerfully defended, and which he will most weakly defend. There is in fact work to be done, much work, and Earl Russell nevertheless remains content with a Ministry which was selected without any work in view, which contains men—as we see in the instance of Mr. Card- well—wholly out of rapport with the popular mind, in which Mr. Gladstone has but one follower, and every great Secre- taryship is occupied by a peer. The Army, the Navy, the Treasury, and Foreign Affairs are all represented in the Peers, while the Commons are told to think them- selves honoured that subordinates are allowed to answer their, clearly impertinent, questions. These things may be said to be of minor importance, and so they are as contrasted with

the measures to be brought forward, but they indicate what is not of minor importance, the weakness to which Mr. Bright pointed, the inability of the Premier to see that men are as important as measures, that a man is no more an efficient minister because he is a good Whig than he is a good black- smith because he believes in verbal inspiration. He has, we hope, done one deed which to himself must appear one of un- holy audacity—has actually gone to the City for a Cabinet Minister. Nevertheless the sky has not fallen, and will not fall even if he travels North for a second and to Ireland for a third, and so at once recruits his working staff and weeds out the men who make the work to be done so hard. The position of the Ministry was difficult in December, but in January, with Mr. Cardwell officially approving massacres which have irritated his own supporters more than any event

of this century, and the Star singing paeans over a Reform Bill which to succeed must be hated of the Star, it is rapidly

becoming untenable. It may defy the Tories still, but if the Third Party is not to assume the reins, we shall see in the middle of the Session the reconstruction we ought to have seen before it.