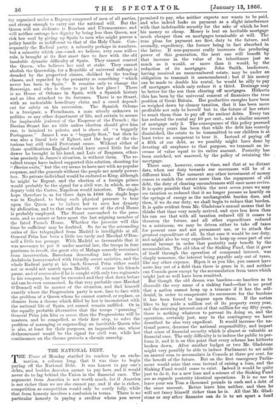 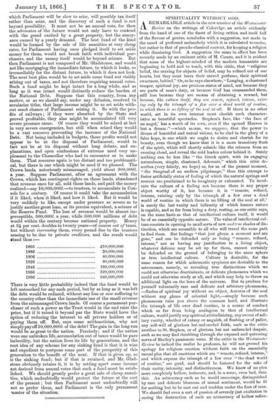 THE Times of Monday startled its readers by an excla- mation, a column long, that it was time to begin paying off the National Debt. It was honest to pay one's debts, and besides America meant to pay hers, and it would never do to lag behind the Union in the financial race. The argument from America is not worth much, for if America is not richer than we are she cannot pay, and if she is richer, competition as competition would only be costly folly, while that from honesty involves a confusion in terms. There is no particular honesty in paying a creditor whom you never

promised to pay, who neither expects nor wants to be paid, and who indeed looks on payment as a slight interference with that indefeasible security for the sake of which he lent his money so cheap. Money is lent on heritable mortgage much cheaper than on mortgages terminable at will. The true pleas for payment are first, duty to the future, and secondly, expediency, the former being in fact absorbed in the latter. If non-payment really increases the producing power of this generation, the next one will benefit by that increase in the value of its inheritance just as much as it would, or more than it would, by the reduction of its mortgages. John Smith, landowner, having received an unencumbered estate, may be under an obligation to transmit it unencumbered ; but if his money can be made to double his rental, he would be silly to pay off mortgages which only reduce it a third. Drainage may be better for the son than clearing off mortgages. Hitherto this has been by the universal consent of financiers the true position of Great Britain. Her productive energies have been so weighed down by clumsy taxation, that it has been more profitable not only to herself but to the future of her estate to remit them than to pay off the ancient debts. Every tax has reduced the rental say 10 per cent., and a similar amount of mortgage only 3. The consequence of this policy pursued for twenty years has been that while the debt has scarcely diminished, the estate to be transmitted to our children is at least twice as competent to bear it. Instead of paying off a fifth of our debt, as we possibly might have done by devoting all surpluses to that purpose, we transmit an in- crease of value equal to its entire amount. Posterity has been enriched, not amerced, by the policy of retaining the mortgage.

There may, however, come a time, and that at no distant date, when our duty towards our successors will be of a different kind. The moment any other investment of money ceases to enrich the estate more than the repayment of old debt, the duty of clearing encumbrances will once more revive. It is quite possible that within the next seven years we may see taxation so reduced that it no longer presses as heavily on the springs of energy as the unchangeable burden does, and then, if we do our duty, we shall begin to reduce that burden. It is quite evident from Mr. Gladstone's annual moans that he thinks that time very nearly arrived, and eyes less keen than his can see that with all taxation reduced till it ceases to threaten the future, and all other expenditure reduced to a minimum, we may be driven either to take off taxes for present ease and not permanent use, or to attack the greatest expenditure of all. In that case it would be our duty, and might also be very expedient, to heap up some part of our annual income in order that posterity may benefit by the accumulation. The old idea of the Sinking Fund, that it grew of itself through the operation of compound interest, was simply nonsense, the interest being payable only out of taxes, like any other expense. Ripen it as you like, you cannot have more hay out of a field than there is grass in it, and neither can Consols grow except by the accumulation from taxes which might just as well have been remitted.

But though the old dream was baseless—so baseless as to discredit the very name of a sinking fund—that is no proof that a nation cannot heap up a treasure if it has the self- denial, in order to compensate its successors for the burdens it has been forced to impose upon them. If the nation likes to lay aside a million out of its property every year, and the accruing interest out of that million for say fifty years, there is nothing whatever to prevent its doing so, and the operation, certainly just, may in the contingency we have described be also very expedient. It would increase the na- tional power, decrease the national responsibility, and impart that sense of financial security which is almost as valuable as financial ease. The only difficulty is to induce the public to per- form it, and it is on this point that every scheme has hitherto broken down. After another budget or two Mr. Gladstone might very possibly be able to induce Parliament to set aside an annual sum to accumulate in Consols at three per cent. for the benefit of the future. But on the first emergency Parlia- ment would seize that sum instead of raising a loan, and the Sinking Fund would cease to exist. Indeed it would be quite just to do it, for a new loan and a seizure of the Sinking Fund are as regards posterity identical operations. It is no use to leave your son Tom a thousand pounds in cash and a debt of the same amount. Better leave him neither, and then he will not fancy himself richer than he is. All that Mr. Glad- stone or any other financier can do is to set apart a fund

which Parliament will be slow to seize, will possibly tax itself rather than seize, and the discovery of such a fund is not beyond possibility. It must not be an annual vote, for then the advocates of the future would not only have to contend with the greed excited by a great property, but the annoy- ance caused by a yearly demand. The best fund of the kind would be formed by the sale of life annuities at very cheap rates, for Parliament having once pledged itself to set aside money for them, would not break faith with individual pur- chasers, and the money itself would be beyond seizure. But then Parliament is not composed of Mr. Gladstones, and would not like mortgaging the immediate future, to which it looks, so irremediably for the distant future, to which it does not look. The next best plan would be to set aside some fund not visibly arising out of taxes, and not therefore requiring annual votes. Such a fund might be kept intact for a long while, and as long as it was intact would distinctly reduce the burden of the National Debt. Suppose that this country, from any motive, or as we should say, under any delusion, resolved to secularize tithe, that large income might be so set aside with- out much chance of Parliament seizing it. So with the pro- fits of railways ; if they were absorbed by the State and proved profitable, they also might be accumulated till very severe pressure came. Of course they would be seized at last in very severe emergencies, but still when seized they would be a vast resource preventing the increase of the National Debt. Not being included in budgets, those profits would not appear to be at the disposal of Parliament, would in fact not be at its disposal without long debate, and ex- planations, and open confessions of extreme need very un- pleasant to the Chancellor who had to encounter or to make them. That resource again is too distant and too problemati- cal, but there is one which might be used if we pleased. The Crown lands, notoriously mismanaged, yield about 300,0001. a year. Suppose Parliament, after an agreement with the Crown, which has contingent rights on those lands, abandoned that revenue once for all, sold those lands, and paid the money realized—say 10,000,0001.—to trustees, to accumulate in Con- sols for a century. Of course it could take the accumulation if it liked, when it liked, and how it liked. But it would be very unlikely to like, except under pressure so severe as to justify another great loan, or its precise equivalent, a seizure of the Reserve Fund. The loss of revenue would be almost im- perceptible, 300,0001. a year, while 300,000 millions of debt would within the century become national property. Money at 3j- per cent. doubles in twenty years—of course out of taxes, but without increasing them, every pound due to the trustees ceasing to be due to private creditors, and the result would stand thus :-

There is very little probability indeed that the fund would be left untouched for any such period, but by as long as it was left the debt would be reduced, without any loss or new suffering to the country other than the immediate one of the small revenue from the mismanaged Crown lands. Of course a permanent pur- chaser of such a power as the Trust would in the end raise the price, but if it raised it beyond par the State would have the option of reducing the interest to all private holders or of paying them off. But, says some arithmetician, why not simplypay off 10,000,0001. of the debt? The gain in the long run would be as great to the nation. Precisely; and if the nation were one unbroken life, accumulation out of taxes would be pure imbecility, but the nation lives its life by generations, and the root idea of any scheme for any sinking fund is that it is wise and expedient to postpone some part of the prosperity of this generation to the benefit of the next. If that is given up, so is the sinking fund; but if that is retained, and Mr. Glad- stone obviously retains it, it is by setting apart some income not derived from annual votes that such a fund must be estab- lished. We should greatly prefer a great sale of cheap annui- ties, which undoubtedly would protect the future at the cost of the present ; but then Parliament most undoubtedly will not so prefer them, and Parliament is the only permanent master of the situation.