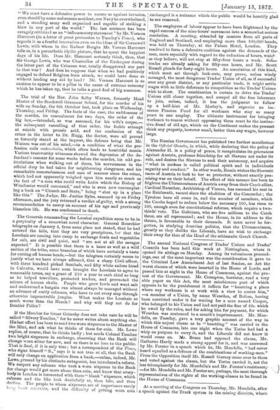 The trial of the Rev. John Selby Watson, formerly Head

Master of the Stockwell Grammar School, for the murder of his wife on Sunday, the 8th October last, took place on Wednesday, Thursday, and Friday. The facts of the case, the suddenness of the murder, its concealment for two days, the order of the big box,—intended, as was assumed, for his wife's corpse,— the subsequent cancelling of that order, the feeble attempt at suicide with prussic acid, and the confession of the crime in the letter to Dr. Rugg, the doctor, were all proved as formerly stated at the inquest, the defence being that Mr. Watson was out of his mind,—in a condition of what the pro- fession calls melancholia, which often leads to homicidal mania. Various trustworthy witnesses showed the depression of the de- fendant's manner for some weeks before the murder, his odd ges- ticulations when walking out of doors, his nervousness in the official duty he had taken for neighbouring clergymen, and his remarkable remorselessness and ease of manner since the crime, which had not apparently weighed upon him nearly so much as the fact of "a man who could write Latin which the Bishop of Winchester would commend," and who is even now contemplat- ing a book on "Church and State," being "shut up in a place like this." The Judge, Mr. Justice Byles, summed up on Friday afternoon, and the jury returned a verdict of guilty, with a strong recommendation to mercy on account of his age and previously blameless life. He was condemned to death.