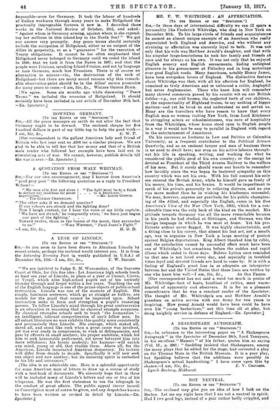 A YEAR OF LINCOLN.

[To THE EDITOR or THE " SPECTATOR."] SIR,—As you seem to have been drawn to Abraham Lincoln by recent events, perhaps the enclosed would interest you. It is from the Saturday Evening Post (a weekly published in U.S.A.) of December 9th, 1916.—I am, Sir, &a., F. W. SKELSET.

" We are indebted to Judge R. M. Wanamaker, of the Supreme Court of Ohio, for this fine idea : Let American high schools teach at least one year of Lincoln, in place of a year of Caesar, Cicero, or Vergil, which nine high-school pupils out of ten uselessly blunder through and forget within a few years. Teaching the use of the English language is one of the prime objects of public-school instruction. Lincoln was one of the masters of English. His simple, luminous sentences, which go as straight as bullets, are models for the pupil that cannot be improved upon. School instruction seeks to form and strengthen a pupil's reasoning powers. To follow Lincoln's mind through his great controversies is an education in reasoning that no classical example surpasses. By classical examples schools seek to teach the humanities — an intelligent, tolerant comprehension of one's fellow men. In all extant literature no man exhibits this quality more consistently and persuasively than Lincoln. His courage, which staked all, dared all, and stood like rock when a great cause was involved, yet was ever ready to compromise, to wink at delinquencies, and pass by affronts in small matters; his proper ambition, which led Lim to seek honourable preferment, yet never betrayed him into mere selfishness; his heroic modesty; his humour—will enrich any mind, young or old, that studies them. Above all, for the American, Lincoln incarnated American democracy. Its technic will differ from decade to decade. Specifically it will now seek one object and now another; but its enduring spirit is embodied in his life and utterances."

[The idea is an admirable one. Here is a splendid opportunity for some American man of letters to draw up a course of study with a text-book of documents. We sincerely hope that in these will be included many of Lincoln's letters and one or two of his telegrams. He was the first statesman to use the telegraph in the conduct of great affairs. The public appeal (never issued) on Conscription must of course be given, and any despatches known to have been written or revised in detail by Lincoln.—En. Spectator.]