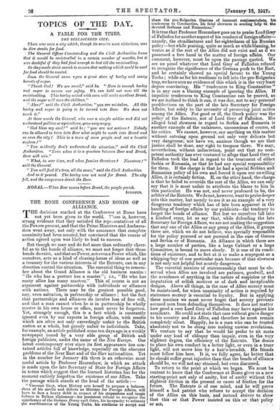 A FABLE FOR THE TIMES.

There was once a city which, though its armies were victorious, was in dire straits for food.

. The General Officer Commanding and the Civil Authorities knew that it would be revictualled in a certain number of months, but it was doubtful if they had food enough to last till the revictualling.

So they made strict search to ensure that nothing which could be used for food should be wasted.

Soon the General came upon a great store of barley and many barrels of sugar.

"Thank God! We are saved," said he. "Here is enough barley and sugar to en-sure our safety. We can hold out now tilt the revictualling. This barley mixed with corn will make excellent Bread, and the sugar will save the children."

" Alas 1" said the Civil Authorities, "you are mistaken. All this barley and sugar. is going to be turned into • Beer. We dare not touch it."

At these words the General, who was a simple soldier and did not understand politics or agriculture, grew very angry.

" God bless my soul!" said he; "you are not serious ? Nobody can be allowed to turn into Beer what might be made into Bread and so save the city! This is a town of sane people and not a lunatic asylum 1 "

"You evidently don't understand the situation," said the Civil Authorities. "Even when it is a question between Beer and Bread, Beer will win."

" What, in war time, and when famine threatens ? Nonsense ! " said the General.

" You will find it's true, all the same," said the Civil Authorities. And so it proved. The barley was not used for Bread. The city fell, and the conquerors drank the Beer.