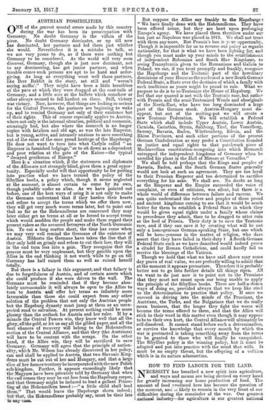 AUSTRIAN POSSIBILITIES. - O NE of the gravest mental errors made

Though we hold that what we have said above may some day prove of real value, we are perfectly willing to admit that at the moment it appears premature. Therefore it is probably better not to go into further details till things ripen. All we want to do just now is to point out to the Prussians that they must not count upon our being unable to apply the principle of the Sibylline books. There are half-a-dozen ways of doing so, provided always that we keep like steel to the determination to practise that policy. If once we succeed in driving into the minds of the Prussians the Austrians, the Turks, and the Bulgarians that we do leally mean business, that the longer they fight the worse will become the terms offered to them, and that the Allies will stick to their word in this matter even though it may appear to be to their own hurt, the Central Alliance will ultimately be self-disaolved. It cannot stand before such a determination, or survive the knowledge that every month by which the war is protracted is taking something away from the terms to be granted to those who will finally be vanquished. The -Sibylline policy is the winning policy, but it must be adopted and put into practice with the mind that wills. It must be no empty threat, but the offspring of a volition which is in its nature adamantine.