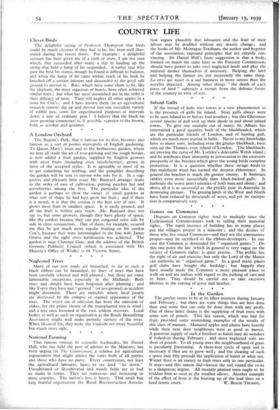 Hall, who has held the post of adviser to the Ministry, has been urging (in The Countryman) a scheme for agricultural regeneration that might attract the votes both of all parties and those who have no party. Every • countryman, not least the agricultural labourer, hates to see land let down." Uncultivated or ill-cultivated and weedy fields arc as bad as slums in towns. They are numerous and increasing in most counties. The nation's loss is heavy. That small but very fruitful organisation the Rural Reconstruction AssoCia-

tion argues plausibly that labourers and the fruit of their labour may be doubled without any drastic change ; and the books of Mr. Montague Fordham, the author and begetter of the association, expound principles that are entirely- con- vincing. Sir Daniel Hall's basic suggestion is that a body, formed on much the same lines as the Forestry Commission, should have power to take over neglected lands and play the national farmer themselves if necessary. Helping the land

and helping the farmer are not necessarily the same thing, La terre qui nzeurt is a sad business in more senses than the

novelist depicted. Among other things " the death- of each piece of land " subtracts a recruit from the defence forces of the country in time of war.