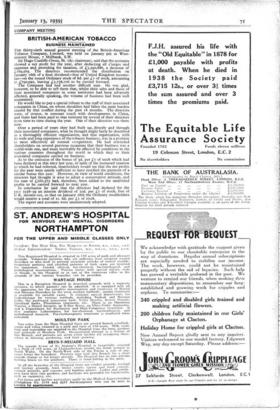 Sir Hugo Cunliffe-Owen, Bt. (th.: chairman), said that the accounts showed a net profit for the year, after deducting all el-urges and expenses and providing for taxation, of £5,590,886, a decrease of £169,563. The directors recommended the distribution on January 16th of a final dividend—free of United Kingdom income- tax—on the issued Ordinary stock of 8d_ per Li of stock, amounting to £790,092, leaving £2,736,706 to be carried forward.

The Company had had another difficult year. He was glad, however, to be able to tell them that, whilst their sates and those of their associated companies in some territories had been adversely affected, generally speaking, the volume of business had been well maintained.

He would like to pay a special tribute to the staff of their associated companies in China, on whose shoulders had fallen the main burden caused by that conflict during the past 18 months. The directors were, of course, in constant touch with developments in China, and visits had been paid to that territory by several of their directors from time to time during the year. One of their directors was there

Over a period of years they had built up, directly and through their associated companies, what he thought might fairly be described as a thoroughly efficient organisation, and that organisation, with its wide and long experience of the tobacco business, was in a position to meet effectively all normal competition. He had reminded shareholders on several previous occasions that their business was a world-wide one, and must inevitably be affected by conditions in the various countries throughout the world in which they or their associated companies carried on business.

As to the omission of the bonus of 3d. per Er of stock which had been declared at this time last year,iti spite of the increased taxation to which he had referred, shareholders would see that the net profits for the year were nearly sufficient to have justified the payment of a similar bonus this year. However, in view of world conditions, the directors had thought it wise to adopt a conservative attitude, and the sum of £266,375 had, therefore, been added to the undivided profits to be carried forward to next year.

In conclusion he said that the directors had declared for the year 1938-39 an interim dividend of rod. per kr of stock, free of U.K. income-tax, so that on January r6th the Ordinary stockholders would receive a total of is. 6d. per £t of stock.