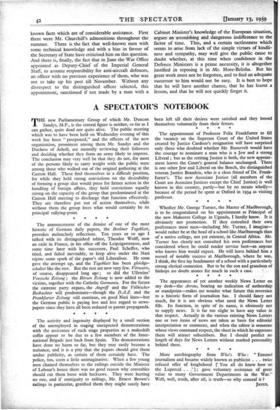 The announcement of the demise of one of the most

historic of German daily papers, the Berliner Tageblatt, provokes melancholy reflections. Ten years or so ago I talked with its distinguished editor, Theodor Wolff, now an exile in France, in his office off the Leipzigerstrasse, and some time later with his successor, Paul Scheffer, who tried, and failed inevitably, to keep alive under the Nazi regime some spark of the paper's old Liberalism. He soon gave the attempt up, and the Tageblatt has been gleichge- schaltet like the rest. But the rest are now very few. Vorwarts, of course, disappeared long ago ; so did the Ullsteins' Vossische Zeitung ; the Borsen Zeitung is now added to the victims, together with the Catholic Germania. For the future the extreme party organs, the Angriff and the Volkischer Beobachter will predominate—though the D.A.Z. and the Frankfurter Zeitung still continue, on good Nazi lines—but the German public is paying less and less regard to news- papers since they have all been reduced to patent propaganda.