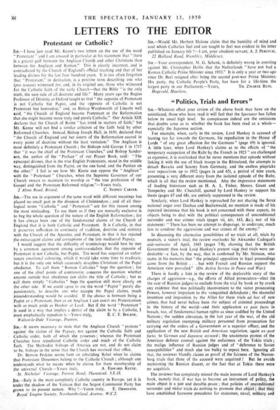 SIR,-1 have just read Mr. Keene's two letters on the use of the word

" Protestant" and I am amazed in particular at his statement that "there Is a greater gulf between the Anglican Church and other Christians' than between the Anglican and Roman." This is clearly incorrect, and is contradicted by the Church of England's official teaching and that of her leading divines for the last four hundred years. It is too often forgotten

that "Protestant," in derivation, is a positive term describing one who (pro testans) witnessed for, and, in its original use, those who witnessed for the Catholic faith of the early Church—that the Bible "is the only truth, the sure rule of all doctrine and life." Many years ago the Regius Professor of Divinity at Oxford taught us that "the opposite of Protestant is not Catholic but Papist, and the opposite of Catholic is not Protestant but heterodox," and, as Bishop Wordsworth of Lincoln well said, "the Church of England became Protestant at the Reformation that she might become more truly and purely Catholic." Our Article XIX declares that the Church of Rome "has erred in matters of faith," but Mr. Keene will not find a similar criticism of the faith held by other Reformed Churches. Instead, Bishop Joseph Hall, in 1650, declared that "the Church of England and her sisters of the Reformation accord in every point of doctrine without the least variation." The Anglican is most definitely a Protestant Church ; the Bishops told George I in 1717 that "it was the chief of the Protestant Churches," and Bishop Sander- son, the author of the " Preface " of our Prayer Book, said: "The episcopal divines, that is the true English Protestants, stand in the middle way, distinguished from the Papist, on the one hand, and the Puritan on the other." I fail to see how Mr. Keene can oppose the "Anglican" with the " Protestant " Churches, when the Supreme Governor of our Church swears to maintain its worship as " the true profession of the Gospel and the Protestant Reformed religion."—Yours truly,