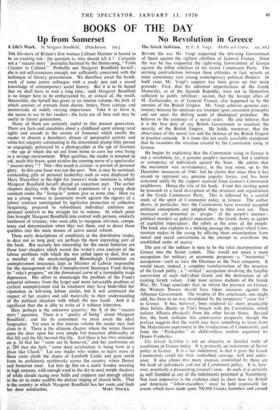 A Life's Work. By Margaret Bondfield. (Hutchinson. zos.) TOE life-story of Britain's first woman Cabinet Minister is bound to be an exciting tale ; the question is, who should tell it ? Certainly not a "success story" journalist haunted by the theme-song, "From Counter to Cabinet." Probably not Margaret Bondfield herself ; she is not self-conscious enough, nor sufficiently concerned with the technique of literary presentation. We therefore await the handi- work of some junior colleague with a ready pen and a sound knowledge of contemporary social history. But it is to be hoped that we shall have to wait a long time ; until Margaret Bondfield is no longer here to be embarrassed by, or critical of, the result. Meanwhile, she herself has given us an interim volume, the hulk of which consists of extracts from diaries, letters, Press cuttings and memoranda of widely varying importance. Take it or leave it, she seems to say to her readers ; the facts are all here and may be useful to future generations.

Many of them are certainly useful to this present generation. There are facts and anecdotes about a childhood spent among rural sights and sounds in the county of Somerset which enable the reader to discern a hereditary stream of purposeful activity and white-hot integrity culminating in the determined plump little person so engagingly portrayed by a photographer at the age of fourteen —the age at which -she set out from home to earn her own- living in a strange environment. What qualities, the reader is tempted to ask, made this brave, quiet exodus the opening move of a spectacular "success story " ? Not—this much is certain—a pursuit of personal glory. In this case fame was not the spur. Nor, it may be surmised, outstanding gifts of personal leadership such as were displayed by Mary Macarthur in the fight for women's trade unionism ih which Margaret Bondfield herself played an important part. The earlier chapters dealing with the first-hand experiences of a young shop assistant under the " living-in " system give us some clue. Here we . see a young woman in passionate revolt against the rigours of a labour contract unmitigated by legislative protection or collective bargaining, prepared to subordinate individual ambition an' personal comfort to the struggle for its redress. At which point fate brought Margaret Bondfield into contact with persons, similarly intolerant of tyranny, who were able to recognise altruism, compe- tence and determination when they met them, and to direct those qualities into the main stream of active social reform.

These early descriptions of conditions in the distributive trades, in days not so long past, are perhaps the most interesting part of the book. But scarcely less interesting for the social historian are those later chapters which record the "writer's own analysis of the labour .problems with which she was called upon to deal, first as a member of the much-maligned Blanesburgh Committee on unemployment insurance, later as Minister of Labour responsible for the management of the Unemployment Insurance Fund during its "rake's progress" on the downward curve of a formidable trade depression. Her effort to disentangle the problem of the Fund's actuarial solvency from the larger and more intractable problem of cyclical unemployment and its treatment may have bedevilled her reputation in left-wing labour circles, but it will command the respect of her readers and add materially to their understanding of the political situation with which she was faced. And it is significant that she is able to write of it without bitterness.

Here perhaps is the unknown quantity : the X of the "success story "_ equation. There is a "quality of being" about Margaret Bondfield ; and for its assessment we must await the ideal biographer. Yet even in this interim volume the reader may find clues to it. There is the ultimate chapter where the writer throws open the door upon her own simple but tenacious philosophy of this life and the life beyond this life. And there is her own reminder on p. 24 that her "roots are in Somerset," and her confession on p. 289 that she feels "some deep satisfaction in being born in a place likce Chard." Let any reader who wishes to learn more of these roots climb the slopes of Lambeth Castle and gaze north from its prehistoric earthworks across the country where Dorset and Somerset meet. Let him dp this on a sunlit Sunday morning in high summer, with enough wind in the sky to send purple shadows of white clouds racing over fields and coppices and enough silence in the air to make audible the distant ringing of church bells. That is the country in which Margaret Bondfield has her roots and finds